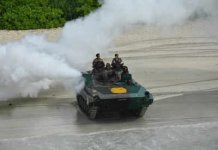 NEW DELHI: The Army now wants to acquire 1,750 futuristic infantry combat vehicles (FICVs), with state of the art weapons and capable of swiftly transporting soldiers, through a new `Make in India’ project in the years ahead.
The Army has issued a RFI (request for information) to “identify probable Indian vendors”, who are capable of commencing supply of the tracked FICVs within two years of the contract being inked, with at least 75-100 “fully-formed vehicles” per year.

This is the second such RFI to be issued in recent days. The Army had earlier this month sought the response of foreign armament companies for another proposed mega `Make in India’ project for induction of 1,770 advanced main-battle tanks or “future ready combat vehicles (FRCVs)” in a phased manner, as was reported by TOI.
An earlier project for 2,300 FICVs has remained stuck in bureaucratic bottlenecks, corporate rivalry and controversies despite first being accorded “acceptance of necessity” by the defence ministry way back in October 2009.
The new RFI says the tracked FICVs will be employed for cross-country operations, including amphibious ones, in plains and deserts along the Pakistan front as well as mountainous terrain and high-altitude areas (up to 5,000-metre) on the China one.
The FICVs should have weapon systems capable of destroying enemy tanks, armoured personnel carriers, low-flying helicopters and other ground-based weapon platforms and positions.
The tracked vehicles should provide “protected mobility” to its crew and troops in the different terrains, including CBRN (chemical, biological, radiological and nuclear) environment, says the RFI.
The FICVs should have an operational life of at least 32 years with maximum one overhaul or repair intervention, and be capable of being transported by existing in-service tank transporter vehicles of the Army, IAF transport aircraft and broad-gauge railway military bogies.