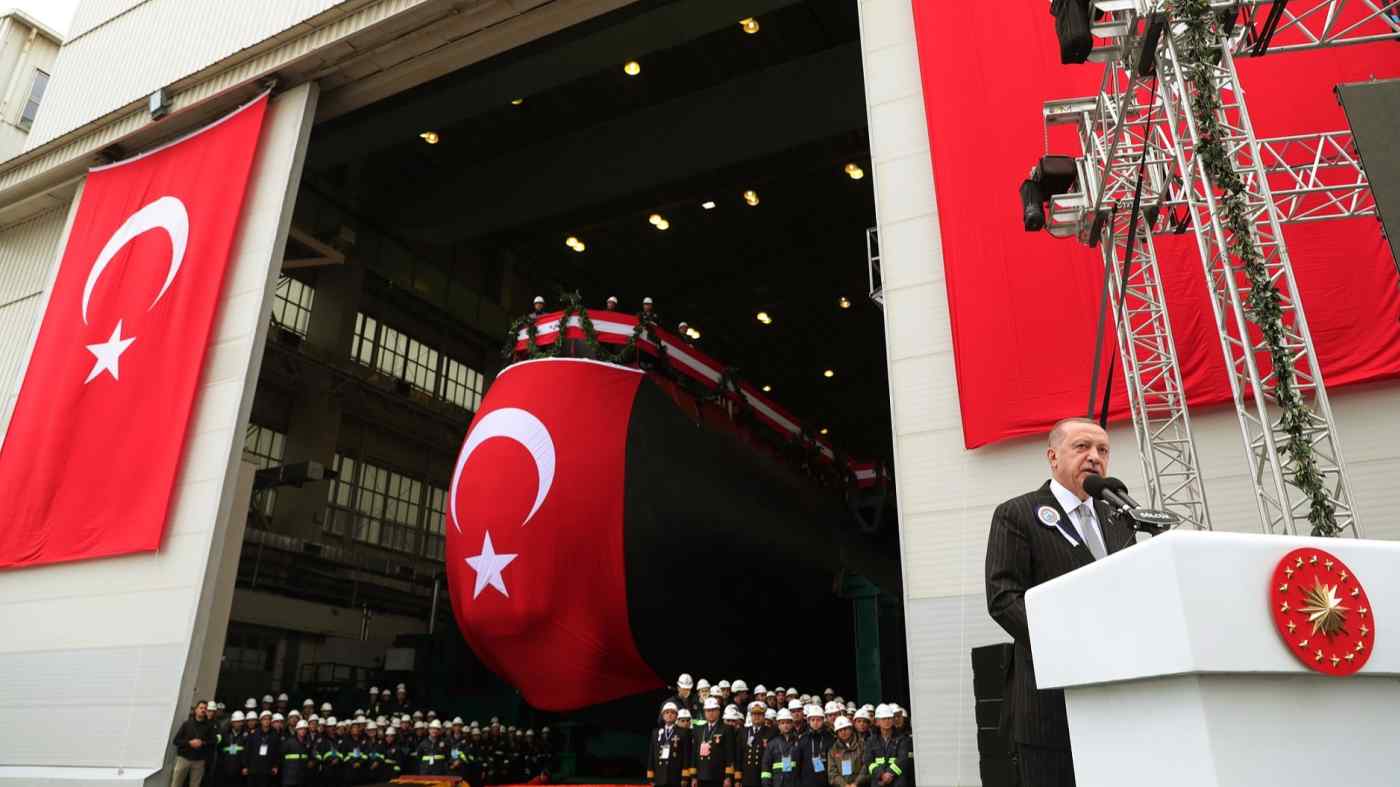 When the opening ceremony for this new maintenance and repair facility in the city of Kayseri was held last week, Erdogan was in no mood to celebrate Turkey's membership in the world's strongest military alliance.

The president recalled Turkey's humiliation at being subject to Western embargoes over its military operations in Cyprus during the 1970s despite being fellow allies in the North Atlantic Treaty Organization.


"Our so-called friends spared no efforts to undermine us during the cross-border operations we conducted to ensure our citizens' security of life," he said. "We never have and never will forget the embargoes, arbitrary practices, pressures and even threats which we faced ... just because we stood by the Turkish Cypriots."

Under Erdogan, Turkey has not been the easiest alliance member to work with. A series of decisions by Ankara has tested the limits of the pact. But as NATO begins to reorient itself in a world where China, not Russia, is the largest military competitor, having Turkey present as a fully contributing member is more essential than ever.


Yet the Turkish leader has continued to test the boundaries of the alliance.

Erdogan's decision back in 2017 to buy the Russian S-400 surface-to-air defense system brought sanctions against his country from Washington.

But as NATO prepares to devise a new Strategic Concept next year -- the U.S.-led alliance's first such document since 2010 -- Turkey's behavior is expected to be less a topic of discussion, not more, in the months ahead.

That is because NATO looks set to prioritize cohesion and unity to bolster the alliance's political strength as it prepares to take on Russia for now and China in the future. That reality has been hinted at in official NATO documents and statements, but perhaps not digested by the wider world.

American lawmakers received a dose of this realpolitik in June when Wess Mitchell, co-chair of the NATO 2030 Reflection Group and former U.S. assistant secretary of state for European and Eurasian affairs, briefed the House Foreign Affairs subcommittee on Europe, energy, the environment and cyber regarding the future of NATO.

Mitchell was one of 10 advisers NATO Secretary-General Jens Stoltenberg tasked with writing a report titled "NATO 2030: United for a New Era," which lays out analysis and recommendations for the organization in the next decade.


At the House hearing, Rep. Brian Fitzpatrick of Pennsylvania asked Mitchell how Turkey's purchase of the S-400 harms NATO. The Trump administration had imposed sanctions on Ankara in December over the 2017 arms deal.

Mitchell replied that the acquisition of a sophisticated Russian air defense system has raised political tensions between Turkey and other alliance members and could affect interoperability. But he also said that from a NATO perspective, the issue needed to be handled prudently.

"We have to keep in mind that the ultimate goal is the cohesion of the NATO alliance as a tool to deter and defend against Russia and eventually also China. That's priority number one," Mitchell told the subcommittee's ranking Republican.

Even with the best-intentioned approach, he said, "if we undermine that goal, I think we're counterproductive."

Later in the hearing, Rep. Nicole Malliotakis, R-N.Y., cited Turkish violations of Greek airspace and territorial waters as well as Turkey's open support of Hamas and asked whether the actions undermine the integrity of NATO.

"What can and should NATO do to address these violations by one of its members?" the Greek-American congresswoman asked.

Again, Mitchell replied that he opposes using NATO as a "punitive tool" against Turkey, saying "there are real perils to that approach."

"The established practice of the secretary-general offering his or her good offices to mediate between Greece and Turkey is the most important thing that NATO can do," he said.

When the alliance issued its last Strategic Concept more than a decade ago, the document made no mention of China.

Meanwhile, the NATO 2030 report, released in November, cited "China" or "Chinese" over 90 times.

The report states at the top that the world of the next 10 years "will be very different" from the Cold War era or the decades that followed.

"It will be a world of competing great powers, in which assertive authoritarian states with revisionist foreign policy agendas seek to expand their power and influence," the report said.

Tacan Ildem, a fellow NATO 2030 Reflection Group member and former Turkish diplomat, told Nikkei Asia that the group's focus was to strengthen the alliance's political dimension. This need became apparent after Russia annexed the Crimean Peninsula from Ukraine in 2014.

Regarding this political dimension, "unity, cohesion, solidarity among NATO allies is of utmost importance," Ildem said.

The alliance must undertake several major changes as it shifts focus toward China, the NATO 2030 recommendations say. As the U.S. military shifts resources to the Western Pacific and develops capabilities suited for the maritime theater of Asia, as opposed to the land combat requirements of Europe, other NATO members will need to share more of the burden to fend off challenges from Russia back at home.


On the sensitive topic of sharing military technology, the NATO 2030 report encourages "allies to commit to invest in military-technological relationships with other allies." That approach means Turkey should acquire defense systems equivalent to the S-400 from the U.S. or other NATO allies instead.

"Doing so is crucial to limit the eventuality that allies are denied procurement of key technologies and therefore go to outside sources," the report said.

Yet the ideal picture painted by the Reflection Group looks far different from the realities on the ground.

Greece, a fellow NATO member, has lobbied Germany for months, aiming to prevent Berlin from selling Turkey the designs for Reis-class submarines. The German-designed subs, which are to be built at Turkey's Golcuk Naval Shipyard in Izmit, will tip the balance of naval power in the eastern Mediterranean in Ankara's favor, the Greeks say.

Turkey has the second largest army in NATO after the U.S. and is one of the top five contributors to the alliance's missions and operations. It joined NATO in 1952, after also facing Chinese forces in the Korean War, with close to 900 casualties.

Erdogan's decision to purchase Russian S-400s is widely thought to be related to his suspicion that the U.S. was somehow involved in the July 15, 2016, bloody coup attempt that claimed more than 250 lives. Turkey prepares to commemorate the fifth anniversary of the incident this week.

Ildem, the former Turkish diplomat, said Turkey and the U.S. have mutual distrust.

"For different circles both in Washington and in other western capitals, the acquisition of S-400s could be seen as something to symbolize Turkey joining the ranks of Russia strategically, forgetting the alliance that it belongs to," he said. "However, we should be rather careful in making analysis about Turkey-Russia relations. Turkey is one country that had fought against Russia throughout its history."

Since the Crimea annexation, Russia has projected power toward the south of NATO, Ildem said.

"It created A2/AD in the Black Sea," he said, comparing Russia's military buildup to the anti-access/area denial strategy that China is forging in the South China Sea to prevent the U.S. from approaching its coast.

"Turkey’s bilateral engagement with Russia should be seen as a necessity," he said. "It does not mean that Turkey and Russia are eyeball to eyeball."

Turkey's acquisition of the S-400 system led Washington to boot Ankara from the project for the fifth-generation F-35 fighter aircraft, claiming the Russian system will compromise F-35 military secrets, a charge that Turkey denies.

Turkey has said if the F-35 is not provided, Ankara will be forced to seek alternatives. Though Erdogan has shown interest in the Russian fifth-generation fighter Sukhoi Su-57, Turkish officials have never mentioned China's J-20 stealth fighter as an alternative.

Switching from NATO aircraft to Chinese or Russian alternatives would bring immense, complex problems ranging from military doctrine, education and maintenance to the interoperability of weaponry, experts say.

Prior to acquiring the S-400s, Turkey negotiated with China for a similar multibillion-dollar missile defense system, but abandoned purchasing plans after strong opposition from the U.S. and other NATO allies.

"Any significant defense industry cooperation between Turkey and China, one of two perceived adversaries of NATO, would cause significant backlash from member states and surely bring an end to any collaboration with Western countries, complicating relations with NATO," Kurc said.

But Ildem said that Turkey prefers to acquire technology from its NATO partners.

"Turkey would, of course, prefer cooperating with its allies," he said. "Why go out of NATO, as our report talks about, to sources like Russia or China, instead of having cooperation with allies, which will also ensure the fundamental objective of having interoperability of weapon systems in its inventory? It would be advantageous to work with allies rather than countries like Russia or China in defense cooperation, because whatever system that you can acquire from the latter will be doomed to remain as a standalone system without any chance of being integrated into the NATO system." 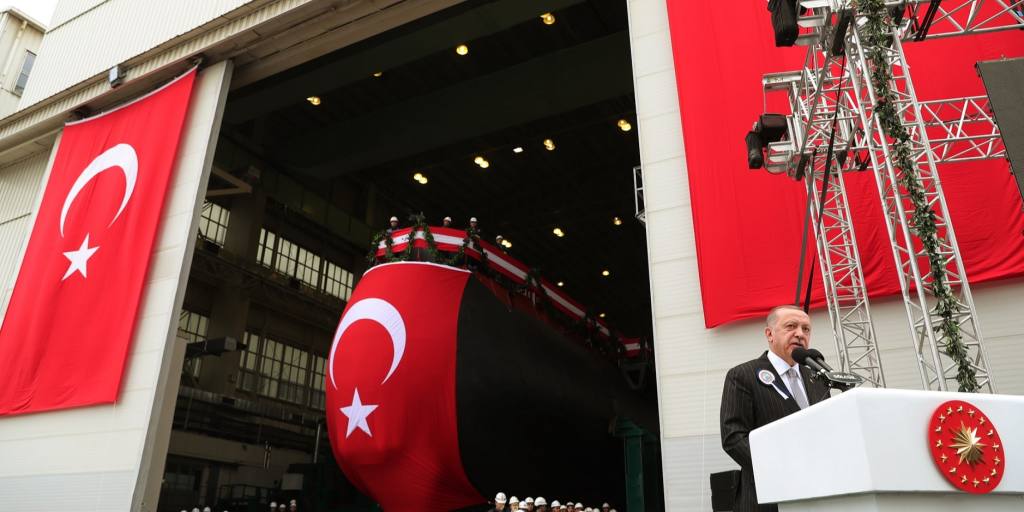