Social media propaganda, complete with hashtags, trends and concocted videos, seems to have one single aim: to boycott Muslim-owned and run businesses.

Hindutva supporters on Facebook and Twitter have been exhorting social media users of the Hindu faith to destabilise what they call the ‘halal economy’ of Indian Muslims by transferring their business to Hindu-owned and run businesses instead.


New Delhi: On October 1, the decapitated body of a 25-year-old Muslim man was found on a railway track in Karnataka’s Belagavi district. He had been killed for being in an interfaith relationship. On September 23, a mob in Mathura assaulted two Muslim men for carrying meat. On September 20 in Meerut, a Hindu woman was forced to slap her Muslim boyfriendacross his face with her slippers. Between September 6 and 10, ID Fresh, a food products company, faced a large-scale misinformation campaign on social media which claimed that the company “mixes cow bones and calf rennet” in its products, only hires Muslims and is “halal certified”.

All this has been documented, broadcast and streamed by the mainstream media. But a more insidious form of Hindutva violence against Muslims also prevails in India – economic violence. This manifests in social media propaganda, complete with hashtags, trends and concocted videos, with one single aim: to boycott Muslim-owned and run businesses. 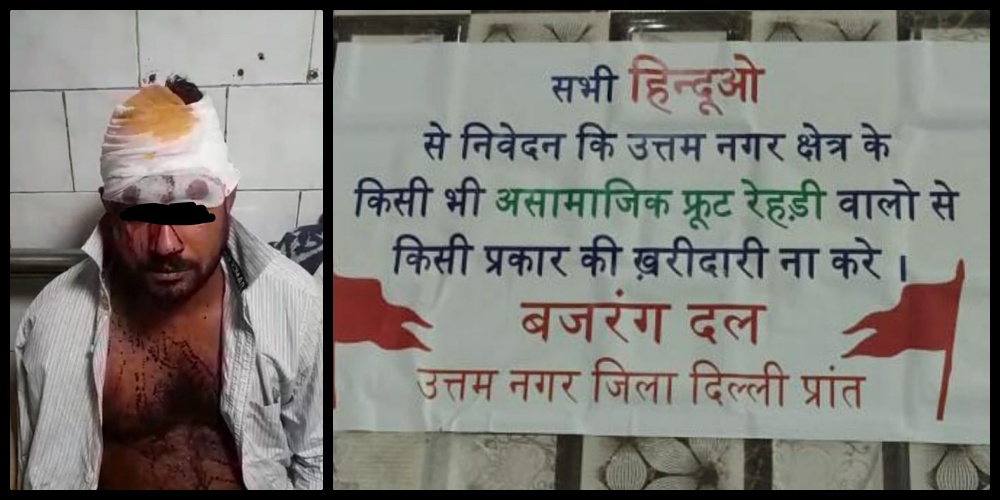 Ever since the COVID-19 pandemic began in 2020 and participants of the Tablighi Jamaat began to be vilified on social media, Hindutva supporters on Facebook and Twitter have been exhorting social media users of the Hindu faith to destabilise what they call the ‘halal economy’ of Indian Muslims by transferring their business to Hindu-owned and run businesses instead.

On August 11, 2021, when the Kranti Sena of Muzaffarnagar set out to warn women celebrating the Hindu festival of Teej against ‘mehendi jihad’, this page posted a message about the need for Hindus to become more active on social media and create a virtual influence strong enough to defend the Hindu community.

A day earlier, when a Muslim e-rickshaw driver was assaulted in Kanpur by a mob and forced to chant ‘Jai Shri Ram’, the same group urged Hindus to repeatedly share, comment and like Hindutva content on social media to outnumber ‘Leftist Muslims’ in cyberspace. The group also posts content to support Suresh Chavhanke, a firebrand news anchor who is known for his Islamophobia.

In another communally-motivated action, a Facebook group called कट्टर हिन्दू शेरों का परिवार(‘Kattar Hindu Shero Ka Parivar, meaning ‘Family of Rigid Hindu Lions’) posted a videoshowing factory workers defiling baked goods while packing them. This video was posted at the same time that the #BoycottID hashtag trended and was used to call for the boycott of Muslim workers and business owners. Although the video itself did not explicitly identify the workers in the video as Muslim, the administrators of the page referred to them as Muslims and insulted them by calling them ‘illegitimate children’ and ‘pigs’. The comment trail, similarly, was filled with anti-Muslim remarks.

Of all the social media platforms popular in India, Facebook hosts the most hate-filled anti-Muslim pages and videos that seemingly seldom violate the platform’s community standards.

This was observed long before the former Facebook employee and whistleblower Frances Haugen told US authorities that the platform was well aware that incendiary anti-Muslim narratives were being promoted on the platform in India.

On September 6, a Facebook group called आएगा तो मोदी ही – Team Namo posted a news clip promoting the behaviour of an AU bank customer who refused to open a fixed deposit because the bank’s advertisements feature the actor Aamir Khan, a Muslim.

This was posted in the same week that ID Fresh battled hashtags such as #BoycottHalal and #BoycottID.

Adding to the vilification, Jayatu Hindurashtra, a Facebook page with 110,692 followers, posted a video asking Hindus to avoid giving money to Muslim beggars unless they say ‘Jai Shri Ram’.

To further promote an anti-Muslim businesses sentiment, the Hindu Jagruti Org, which has 50,000 followers on Twitter, relayed tweets using the hashtag #HalalEconomy_NationalThreat. This included tweets that instigated Hindus to engage in the economic ostracisation of Muslims amid the surge of similar tweets that followed the ‘Boycott ID’ incident.

Adding to the economic violence, a social media page called Sanatani Hindu posted a video of a man in a temple lecturing attendees yet again on how to keep Muslim vendors away from Hindu women. The man in the video alleged that Muslim vendors ply the roads of Hindu colonies with their carts only to reconnoitre the area, after which they ‘attract’ these women who, in no time, disappear. The page also urged Hindus to ask the names of fruit and vegetable vendors before buying from them, so as to buy from Hindus only.

Even on Twitter, hashtags such as #BoycottHalal, #EconomicJihad, #SayNoToHalal, #Say_yes_to_Jhatka trend frequently. Posts that use these hashtags promote the thought that buyers of halal-certified products indirectly contribute to terrorist activities against their ‘own’ people. Several tweets also declare that halal certification should be banned as it contradicts secularism. Tweets using the #EconomicJihad hashtag claim that halal products are the route to the Islamisation of India, that the adoption of Jhatka meat will lead to the creation of a Hindu rashtra (nation) and that Hindus do not work in places where halal products are made. Meanwhile, some #SayNoToHalal tweets demand a ‘Sanatan Dharmik certification’ for food to cancel halal certification.

The tweets that use the hashtags listed above began to proliferate around the same time as the ‘Boycott ID’ hashtag, but rather than run out of steam as time passed, their promoters seem to have doubled their efforts just before the Hindu festival period of Navratri, which started last week.

As Hindus prepared for the festival, Hindutva propaganda demanded that they purchase their festival requirements from Hindus only. At the same time, a Facebook group called RSS Karyakarta (Rashtriya Swayamsevak Sangh Workers) with 2,78,800 members shared posts on boycotting vendors ‘who would use the money for jihad’.

Another hashtag that has made an appearance since Navratri began is #जिहादी_मुक्त_नवरात्रि(Jihadi Free Navratri). Social media users who tweet with this hashtag allege that the aim of Muslim organisers of Navratri events is to foster ‘love jihad’. The tweets also demand banning the entry of Muslims to Navratri events. Owing to this hashtag, the Vishwa Hindu Parishad (VHP) instigated the Indore police to book four young Muslim men for entering a Navratri event.

Tweets promoting the #जिहादी_मुक्त_नवरात्रि hashtag also share videos of meat shops being forcibly shut during the Hindu festive period. On Facebook, one Ved Nagar who identifies himself as a supporter of the Hindu Gau Raksha Dal as well as the Bharatiya Janata Party (BUP), the VHP and the RSS, uploaded videos threatening violence to those who dared to open meat shops during Navratri and instigating those of the ‘Sanatani Dharam’ to take the responsibility of ensuring that these shops remain shut. Nagar’s argument is that meat shops that stay open during the Navratri festival disrespect the feelings of Hindus. 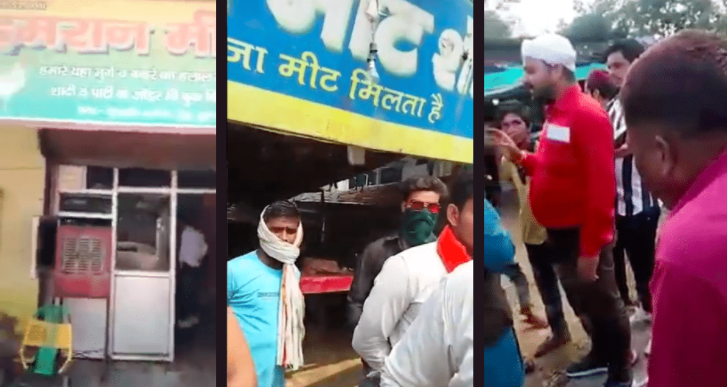 As the ‘Jihadi free Navratri’ hashtag continues to trend, the #हिन्दू_राष्ट्र_सन्कल्प_अभियान(Hindu rashtra campaign) births new iterations of Hindutva’s obsession with ‘jihad’. Recently, #JuiceJihad featured a widely-circulated video that accused Muslim juice sellers of using toxic adulterants. On August 23, during the controversy surrounding the assault of a 25-year-old Muslim bangle seller in Indore by a right-wing mob, the hashtag #banglejihad was used not only to call for the boycott of Muslim bangle sellers, but also to provoke Hindu men to beware of Muslims interacting with Hindu women based on an irresponsible tweet by News18 Madhya Pradesh that linked the bangle seller to love jihad.

Trending with #FoodJihad and #EconomicJihad was the incident of the dosa seller in Mathura whose stall was vandalised by one Devraj Pandit because it was named after a Hindu deity. A day later, the same Devraj Pandit bullied a biryani vendor into moving his cart elsewhere. The video of the biryani seller being harassed was also uploaded by Pandit on his Facebook account.

Many of the groups and individuals responsible for anti-Muslim content on social media identify themselves as supporters of organisations affiliated with the right-wing BJP, RSS and VHP. These content producers also exhibit unshakable support for Yogi Adityanath, the chief minister of Uttar Pradesh, even referring to him as ‘Baba Yogi’. Similarly, Prime Minister Narendra Modi is given god-like status by these individuals, who often replace the word ‘Mahadev’ in the Hindu chant ‘Har Har Mahadev’ with ‘Modi’.

As more of these pages and hashtags proliferate and trend, it becomes clearer with every click, share, post, like and follow that those involved in the distribution of content that vilifies Muslims not only enjoy massive acceptance by India’s ruling party, but are also glamorised by the affiliates of the BJP government as foot-soldiers of the Hindu rashtra movement.

Social media propaganda, complete with hashtags, trends and concocted videos, seems to have one single aim: to boycott Muslim-owned and run businesses.