Skipper Babar Azam hit an attractive half-century and in-form Fawad Alam batted solidly to help Pakistan fight back as the opening day of the second Test was cut short by rain in Rawalpindi on Thursday.

Babar was batting on 77 and Fawad on a solid 42 as Pakistan recovered from a precarious 22-3 to 145-3 in 58 overs, but play could not be started after the tea break.

Heavy rain lashed the stadium and covers were placed on the pitch before play was called off due to rain and a wet outfield at 4:38pm.

The home team had won the toss and batted on a flat, brownish Rawalpindi Stadium pitch, which helped spinners from the outset, but Pakistan recovered from the early loss of three wickets.
Spinner Keshav Maharaj (2-51) and pacer Anrich Nortje (1-30) had left Pakistan struggling on 63-3 at lunch but Babar and Fawad added 123 for the unbroken fourth-wicket stand to steady the innings.


Maharaj praised Babar and Fawad for their resolute batting.

“With the newish ball and moisture the ball sort of sticks in the wicket a little bit but the turn was minimised substantially after lunch and Babar and Fawad absorbed the pressure well,” said Maharaj.

Babar, who managed just seven and 30 in the first Test, returned to his stylish best, having so far punched 12 boundaries in his 16th Test half-century.

Fawad, who scored a fighting hundred in the first Test, was steady with five hits to the fence.

When it looked like Babar would hit another hundred — his third in the last three Tests at this venue — rain played spoilsport as umpires Aleem Dar and Ahsan Raza — both from Pakistan — called off the day's play after an inspection of the ground.

Play will resume 15 minutes early at 9:45am on Friday to compensate for the lost time.

Earlier, Pakistan reached 21 without loss before throwing away three wickets for one run in the space of 23 balls.

Maharaj, brought into the attack in just the ninth over, had opener Imran Butt caught behind for 15 and then trapped senior batsman Azhar Ali leg-before for nought in his next over.

Nortje then produced a sharp rising delivery to Abid Ali, whose fended push was caught smartly at short-leg by Aiden Markram.

Pakistan lead the two-match series 1-0 after winning the first Test in Karachi by seven wickets.

Pakistan retained the playing XI which won the first Test by seven wickets inside four days at Karachi last week.

"The wicket looks dry and we will try to put them under pressure by putting runs on board," Babar said at the toss. "We don't want to relax after taking the lead and will push for 2-0."

Quinton de Kock, who will step down from Test captaincy after the series, will be hoping his team would have learnt from the mistakes in the first Test.

The Proteas brought in two allrounders George Linde and Mulder to strengthen their batting lineup against the spin threat of Nauman and Shah. 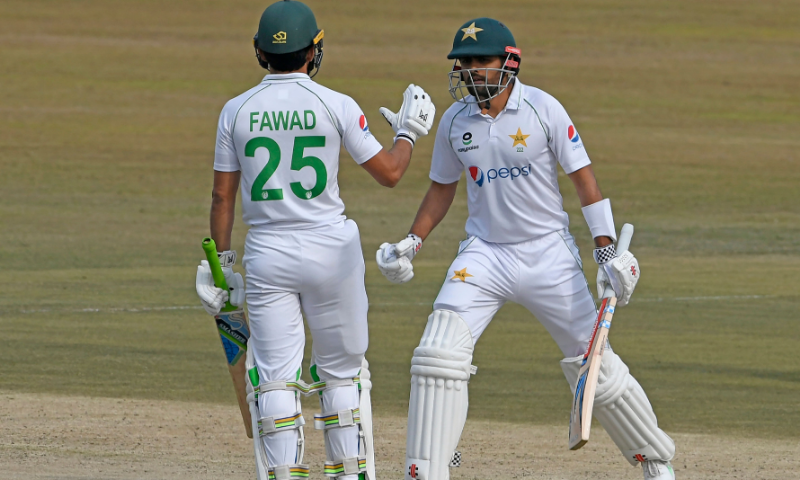