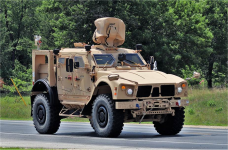 According to information published by the Defesa Aera & Naval website on July 28, 2021, Brazil will acquire American-made JLTV (Joint Light Tactical Vehicles) for infantry units of if its Naval Forces. The vehicles will be entered into service for 2022. The JLTV vehicles are in service with the United States Army as well as the U.S. Marine Corps to replace a portion of each service’s light tactical wheeled vehicle fleets as the HUMVEE 4x4 light tactical vehicle.

The JLTV is currently being produced by the American company Oshkosh Defense, headquartered in Oshkosh, WI. In August 2015, the Army awarded Oshkosh a $6.7 billion low-rate initial production (LRIP) contract to procure the initial 16,901 vehicles for the Army and Marines. In June 2019, the U.S. Assistant Secretary of the Army (Acquisitions, Logistics, and Technology) approved Army JLTV full-rate production (FRP).

The JLTV program provides the Army and Marine Corps with a general-purpose, light tactical vehicle that will deliver the optimal balance of protection, payload, and performance to enhance the effectiveness of ground combat and supporting forces.

The layout of the JLTV is standard for a modern wheeled combat vehicle with the engine at the front, crew and troops in the middle and cargo area at the rear.

The JLTV is equipped with an advanced crew protection system that offers a protection level similar to that of Mine Resistant Ambush Protected (MRAP) vehicles. The vehicle is powered a digitally-controlled Gale Banks Engineering 866T V-8 diesel developing 397 hp. at 3,000 rpm, based on the architecture of the General Motors (GM) Duramax. It can run at a maximum road speed of 120 km/h with a maximum cruising range of 480 km.

Brazil will acquire American-made JLTV (Joint Light Tactical Vehicles) for infantry units of if its Naval Forces. The vehicles will be entered into service for 2022.