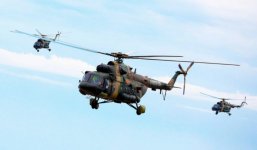 According to the company’s annual report, earlier in 2019, JSC Russian Helicopters, a Rostec subsidiary, signed a record contract for the supply of new helicopters to China. The contract covers 121 new aircraft.


A large part of ordered helicopters is intended for the needs of the People’s Liberation Army.

It is worth mentioning that the fist Chinese Mi-171SH hecliopters were spotted in the report of the Chinese TV channel Phoenix news on the activities of the Ulan-Ude Aviation Plant.