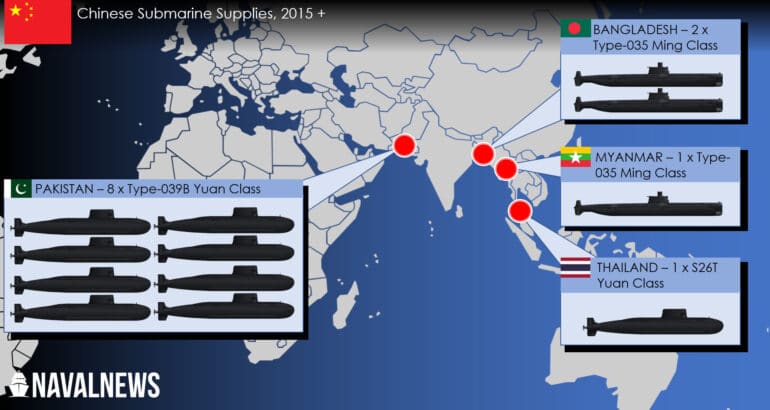 Myanmar is the latest country to acquire a submarine capability from China.

Submarine sales are a powerful weapon in the game of international power and influence. China is increasingly combining it with the Belt and Road Initiative in ways which shape the geopolitical landscape. The latest surprise submarine supply illustrates this.​

H I Sutton 29 Dec 2021
When a Chinese submarine entered the Malacca Strait on December 20, heading towards the Indian Ocean, there was speculation about where it was going. This was answered when it pulled into the Yangon River, Myanmar, on December 23. Literally the next day it was commissioned into the Myanmar Navy as UMS Minye Kyaw Htin.

The sale, or transfer, had not been announced in advance. It highlights the growing influence of China in the region and the role submarine sales play in the geopolitical arena.

And China’s impact on the world submarine market. China is now supplying 4 countries with submarines. More may follow.

Buying submarines is not like cars, where you select a model, and pick from a catalogue of features. They are not bought off the shelf, instead each aspect has to be defined. The location where they are to be built, the degree of customization, crew training, and ongoing maintenance are all part of a typical deal. And there is always a geopolitical aspect, and often government-to-government negotiations.

And it is not simply commercial. Governments can supply submarines to help create, or reinforce, alliances. Or at least expect favorable future relations going forward. This is especially true if the submarines are provided free, or at a major discount. One way to do this is by supplying older submarines from their own inventory. It can be a win-win and limits the risk if politics change in the future.

The Chinese submarine for Myanmar is more complex than most in a few ways. Although China has been Myanmar’s main defense supplier for many years, it had not been in the frame for submarines. Instead, India and Russia had. Externally, it might be seen as a stab in the back to Indian efforts.

Myanmar has been trying to establish a submarine capability for about two decades. Exactly a year earlier on December 24 2020 the Myanmar Navy commissioned its first submarine, the UMS Min Ye Theinkhathu. Significantly, that submarine had been transferred by India, China’s immediate rival in the Indian Ocean region.

Both submarines are relatively old types, and both are second-hand. The Chinese one is a Type-035 Ming Class, and the Indian one is a Russian-built KILO class boat. Despite arriving second, the Chinese boat is hardly an upgrade over the Indian supplied one. In fact, the KILO is generally considered the more capable platform, although the exact details of their equipment fit are naturally harder to pin down.

So the sudden acquisition of an older Chinese boat is not about modernizing Myanmar’s capabilities. It is instead part of a bigger picture. China is presumably expecting to bag the follow-on order or more modern boats. And solidify its geopolitical position in the Bay of Bengal in the process.


China has done something very similar in the past. In 2017 it supplied two ex-PLAN (Chinese Navy) Type-035 Ming Class submarines to Bangladesh.

For the past few decades, the submarine export market has been dominated by France and Germany. These big players are already being challenged. These include new entrants South Korea, Spain and Japan, and reemerging established players like Sweden. And of course Russia has a stake in submarine exports. Now China is joining the club and rapidly rising towards the top.

China is already supplying four nations with a total of 12 submarines. The largest, and likely most sophisticated, deal is for Pakistan. The Pakistan Navy is getting eight Type-039B Yuan Class submarines, with four being built locally. These missile-capable submarines come with AIP (Air Independent Power).

Thailand is getting another Yuan, designated S26T. Meanwhile ex-PLAN Type-035 Min Class boats, which are less capable than the Yuans, have been supplied to Bangladesh (2) and now Myanmar (1). China is known to be courting other countries with submarines, notably Nigeria. 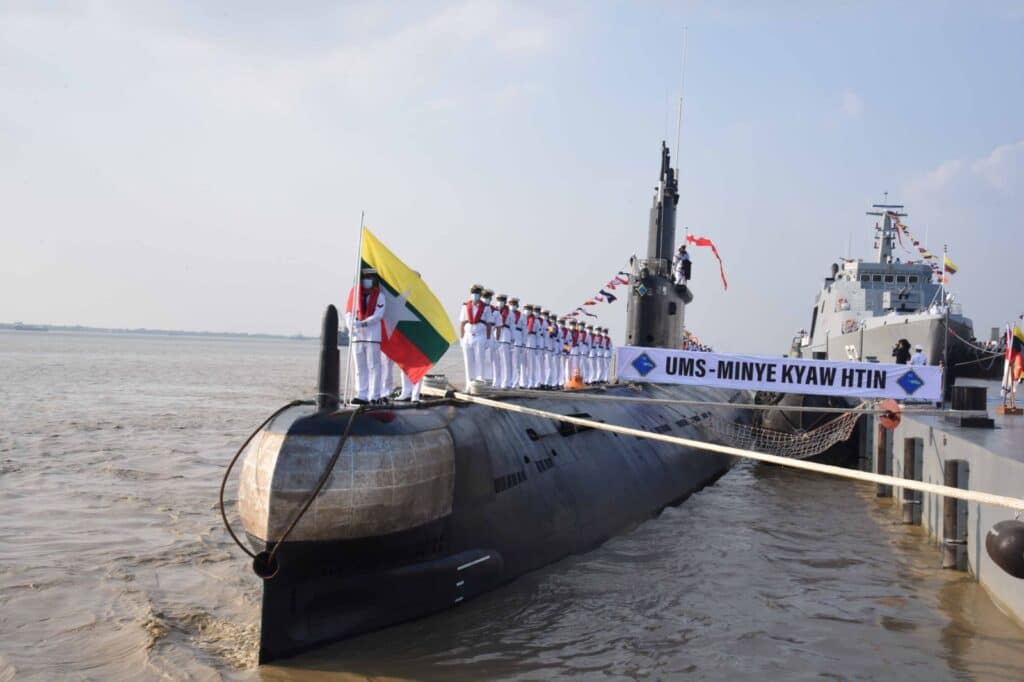 Like Russia, China is willing to supply submarines to countries which western governments may not. But unlike Russia its new-build submarines come with AIP. Thrown together with the classic Belt-and-Road incentives this may make them particularly appealing to internationally isolated governments.

Western leaning submarine builders will also be watching Chinese developments. On the one hand, there are many prospective customers who would not consider Chinese submarines. But equally, the markets undoubtedly overlap with many countries being open to both China and the West. Chinese submarine designs will increasingly be competing directly against Western types.

The game will not only be about money, but strategic influence and position. For China there is the added dimension of the Belt and Road Initiative. This is a Chinese government strategy to invest in key infrastructure developments around the world. Countries brought into this in a big way include Myanmar.

While the Belt and Road projects are infrastructure, many will see a very blurred line between them and the submarine sales. Said another way, the submarines are part of an influence game and strategic positioning. They can be leveraged in a similar way to port or shipyard projects.

In the case of Myanmar, it will be interesting to see the sales conditions. Not just the price, which is surely cheap or free, but the future restrictions it places on Myanmar. 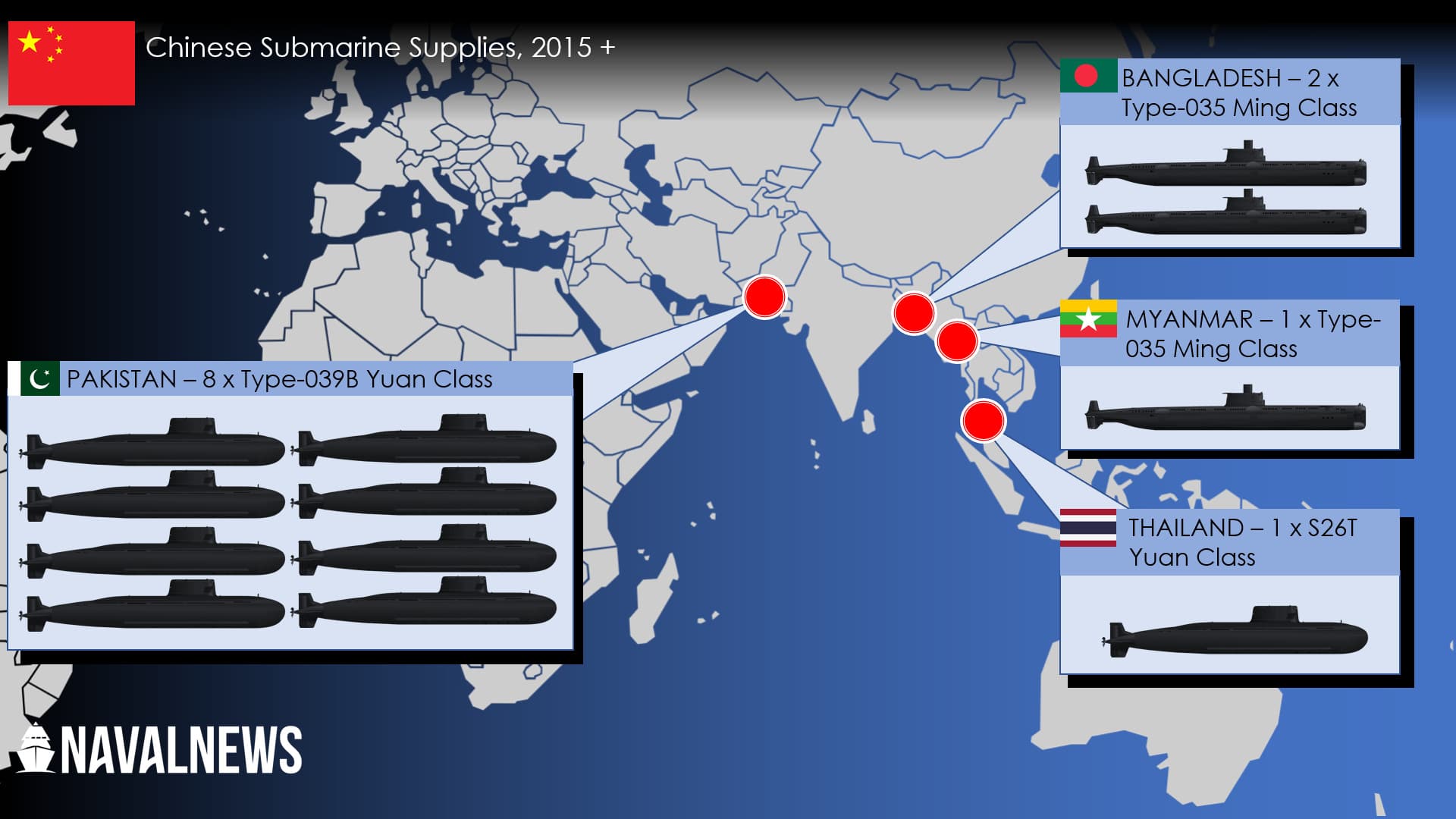 Submarine sales are a powerful weapon in the game of international power and influence. China is increasingly combining it with the Belt and Road Initiative in ways which shape the geopolitical landscape. The latest surprise submarine supply illustrates this. China has postponed the launch of its Type 003 aircraft carrier originally scheduled for today.

The People’s Liberation Army Navy (PLAN) delayed the planned launch due to logistical problems as a result of a surge in COVID-19 cases, which triggered an extended lockdown in Shanghai.

It’s unclear for how long the release will be delayed, but upon launch the Type 003 will be China’s third aircraft carrier and the first capable of launching aircraft through a hydraulic catapult and recovering the aircraft with sophisticated arrestor wiring.

China intends to produce four carriers by the end of 2022 as part of its ambition to be the most powerful and advanced blue-water navy by 2030.

China’s effort to upscale its military hardware indicates its urge to take control over the South China Sea and, eventually, Taiwan.

China views the presence of external powers like the US as an intervention in its competing regional maritime claims.

Given the severe Shanghai outbreak, expect the delayed carrier construction to finish by summer.

Amid the US Navy’s Freedom of Navigation Operations (FONOP) in the South China Sea, the carrier’s construction will directly feed China’s blue water aspirations of exercising sea control at long range. Consequently, this will increase the threat of confrontations in the South China Sea and beyond.