Far-right extremists in Germany have started to mobilise for a “hot autumn” of protests against soaring energy prices on social media, reports energy and climate newsletter Tagesspiegel Background. The Telegram channel of extreme right-wing party “Free Saxony,” which authorities classify as extremist, warns of a “climate dictatorship,” arguing the government purposefully provokes an emergency to destroy Germany’s economy instead of using Russian gas supplies, according to the article. “Soon the temperature police will storm into your homes with a thermometer,” the channel says. “Even if it’s still midsummer: Many will soon be very cold if we do not wake up and rise up.” In a similar vein, extremist campaign network “One percent” says: “This crisis is preordained, so we can prepare for a 'hot' autumn, a 'hot' winter, even if we have to freeze. This gives us time to set the right course now.”
The German government is very concerned about the social consequences of soaring energy prices and has launched several programmes to support citizens. But many experts warn that the full impact of rising prices is yet to be felt, with the country’s grid agency expecting a tripling of household gas bills from 2023. An analysis conducted earlier this month stated the energy crisis threatens to push even German middle class households into “energy poverty”, where a household’s energy bills exceed 10 percent of net income.

A survey had shown 44 percent of the population can imagine to protest against high energy prices, the article says. "If the fears are confirmed and there is a recession, more inflation and unemployment, then there will be good reason to demonstrate," Stefan Lauer, who analyses far-right extremists at the Amadeu Antonio Foundation, told the newsletter. "People who can't pay their bills will have the urge to take to the streets." He added it was still an open question which protests they will join, and warned that right-wing demonstrations will already be there, waiting for more people. Lauer said alternative demonstrations offered by democratic actors were needed to prevent a strong showing at right-wing protests. He called on labour unions to organise protests against high prices or government policies.

Germany’s Switch to Diesel From Gas Comes at a Cost​

Across Germany, executives have spent the last few months war gaming how to respond if Russian President Vladimir Putin cuts off gas supplies. And many, from tiny companies to global behemoths, have arrived at the same solution: switch to oil.

In Munich, the municipal utility has converted two gas-fired boilers to run on diesel. Further South, in the German Alps, the Berchtesgadener Land farming cooperative has sent two milk-truck drivers to learn how to handle an oil-delivery rig, just in case they need to buy. To the North, the Veltins beer brewery near Dusseldorf has stockpiled five weeks’ worth of diesel to prepare for an emergency shift away from gas.

In some cases, it’s about burning fuel-oil in boilers and steam generators previously fired with natural gas; in others, it’s about running diesel generators to avoid electricity blackouts.

Berlin is quietly encouraging the shift. Wiegand-Glas, which produces glass bottles, was able to get the paperwork needed to prepare its furnaces to run using heating oil rather than gas in days, for example. “I have promised to reduce the bureaucracy when converting systems to an absolute minimum,” Anja Siegesmund, the regional environmental minister, said.

Privately, oil traders say they are getting inquiries from German companies that either haven’t previously bought fuel-oil or diesel, or abandoned the practice many years, or even, decades ago.

Take Covestro AG, a chemicals company that produces the building blocks of plastics. For years, it has relied on natural gas. But earlier this week, it told investors during its second-quarter results presentation that it was “initiating various measures to reduce its gas requirements in Germany in the short term, such as by switching to oil-based steam generators.”

The incentive to reduce gas consumption is huge after Putin reduced supplies to Germany via the Nord Steam 1 pipeline. The Dutch TTF gas contract, a European benchmark, is trading above 205 euros ($209) per megawatt hour, 10 times its average in the decade through 2020 and equivalent to about $350 per barrel of oil. Meanwhile, Brent crude is hovering around $100 per barrel. Hans-Ulrich Engel, BASF SE’s chief financial officer, did the math earlier this month: at prevailing prices, “it may actually be cheaper to use, as an example, heating oil to produce your steam, than use very expensive natural gas,” he said. 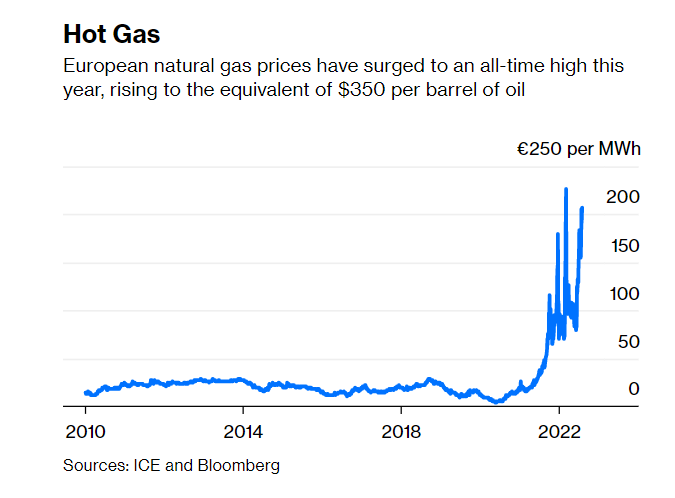 The consequences are twofold. German industry, long used to running on cheap Russian energy supplies, may be able to reduce its reliance on gas by more than previously thought without having to shut down completely. German gas demand is already running well below its five-year average for this time of year. Morgan Stanley reckons that German industrial gas consumption fell 24% in July from the same month in 2021. If the trend continues, European gas prices may not rise as much as feared, even if Putin completely shuts down exports later this year. The worst-case scenario, with TTF prices surging above 300 euros or even 400 euros, may be avoided. But the corollary may be a surge in German oil demand this winter well above anything currently estimated, potentially boosting global petroleum prices.

The size of the potential for incremental oil consumption is hotly debated, with bears and bulls offering good reasons for optimism and pessimism. Last year, oil bulls anticipated a significant demand boost from fuel-oil fired power plants that never materialized. Nonetheless, Energy Aspects Ltd., a consultant, estimates that if all of Europe’s oil-fired electricity plants operate this winter, it would add an extra 340,000 barrels per day to the continent’s demand. To put that into context, it’s larger than the 200,000 barrels per day increase in European oil demand anticipated by the International Energy Agency for 2023.


Moreover, those numbers don’t take into account the potential explosion in the use of diesel-fired generators and the use of heating oil and fuel-oil in industrial boilers and steam generators. With little hard data about how many companies have refurbished their boilers to run on oil, and how many others have purchased emergency power generators, any estimate is more conjecture than forecast. Still, some oil traders and consultants are penciling in a further 200,000 barrels a day in Germany and neighboring nations.

The gas-to-oil switch faces enormous obstacles, however. BASF, the German chemical behemoth, is paradigmatic of the difficulties. In a presentation to investors last week, the company said that preparations to substitute natural gas with, for example, fuel oil, were “progressing well,” echoing what other German companies have said in the last few weeks. But it included a big caveat in a tiny footnote: “Precondition is the sufficient availability of fuel oil.”

If companies in Europe’s biggest economy switch to oil from gas simultaneously this winter, it could potentially just trade one problem — gas shortages — for a second issue — a tighter market for diesel. 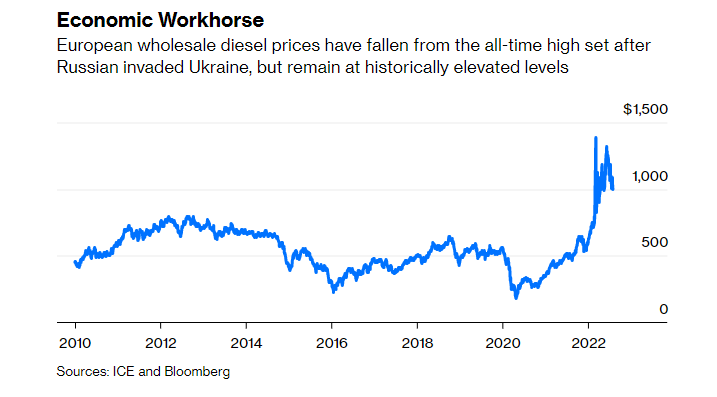 For now, European diesel has stabilized at around $1,000 per metric ton, down from a record of about $1,500 in early March, days after the Russian invasion of Ukraine. Yet the market will have to contend with the coming ban on Russian refined products, which will be fully effective by early February and will reduce diesel supply into Europe just when purchases may be peaking.

Diesel is the workhorse of the global economy. Since the beginning of the crisis, it has been the hottest refined product, even if it’s often overshadowed by US gasoline prices. As German industry prepares to wean itself off Russian gas in the coming months, diesel prices may start to dominate the headlines — for all the wrong reasons.


Bloomberg - Are you a robot? 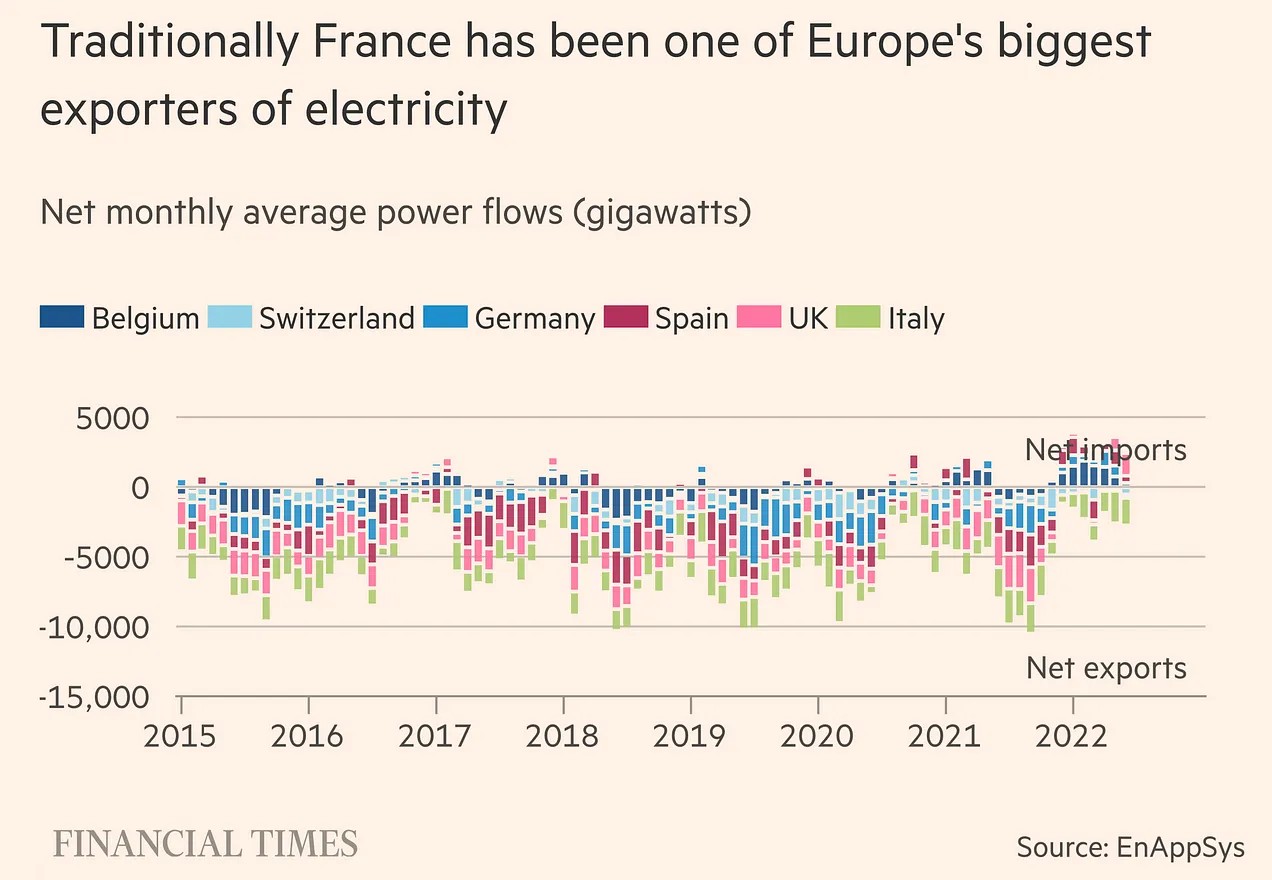 Another LNG ship will arrive to Turkey tomorrow. 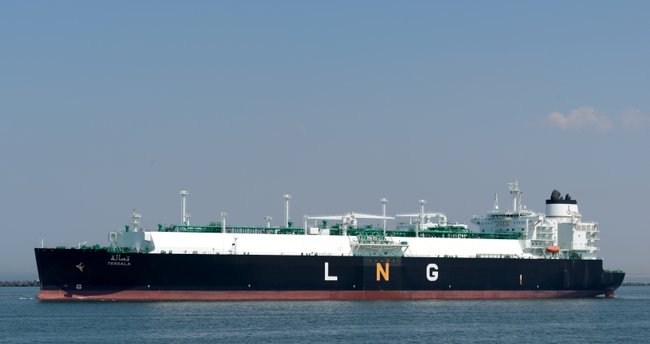 Sami1234 said:
Another LNG ship will arrive to Turkey tomorrow.

A drop in the bucket. For to supply Turkey with those ships, 1000 of them,fully loaded, must arrive to Turkey every day.

rodeo said:
A drop in the bucket. For to supply Turkey with those ships, 1000 of them,fully loaded, must arrive to Turkey every day.
Click to expand...

I don't know how much Turkey consume per month, but starting next winter every drop is important especially with the low prices that Turkey is buying from Algeria, Europe is sucking every cubic meter from the market with much higher prices, Algeria has a total of 1 billion cubic meters LNG fleet, most of it goes to Italy.
T

Even a major natural gas & LNP exporter Australia is considering to curb gas export to avert the gas supply shortfall in the domestic market. It is going to be a very cold winter for Europe. 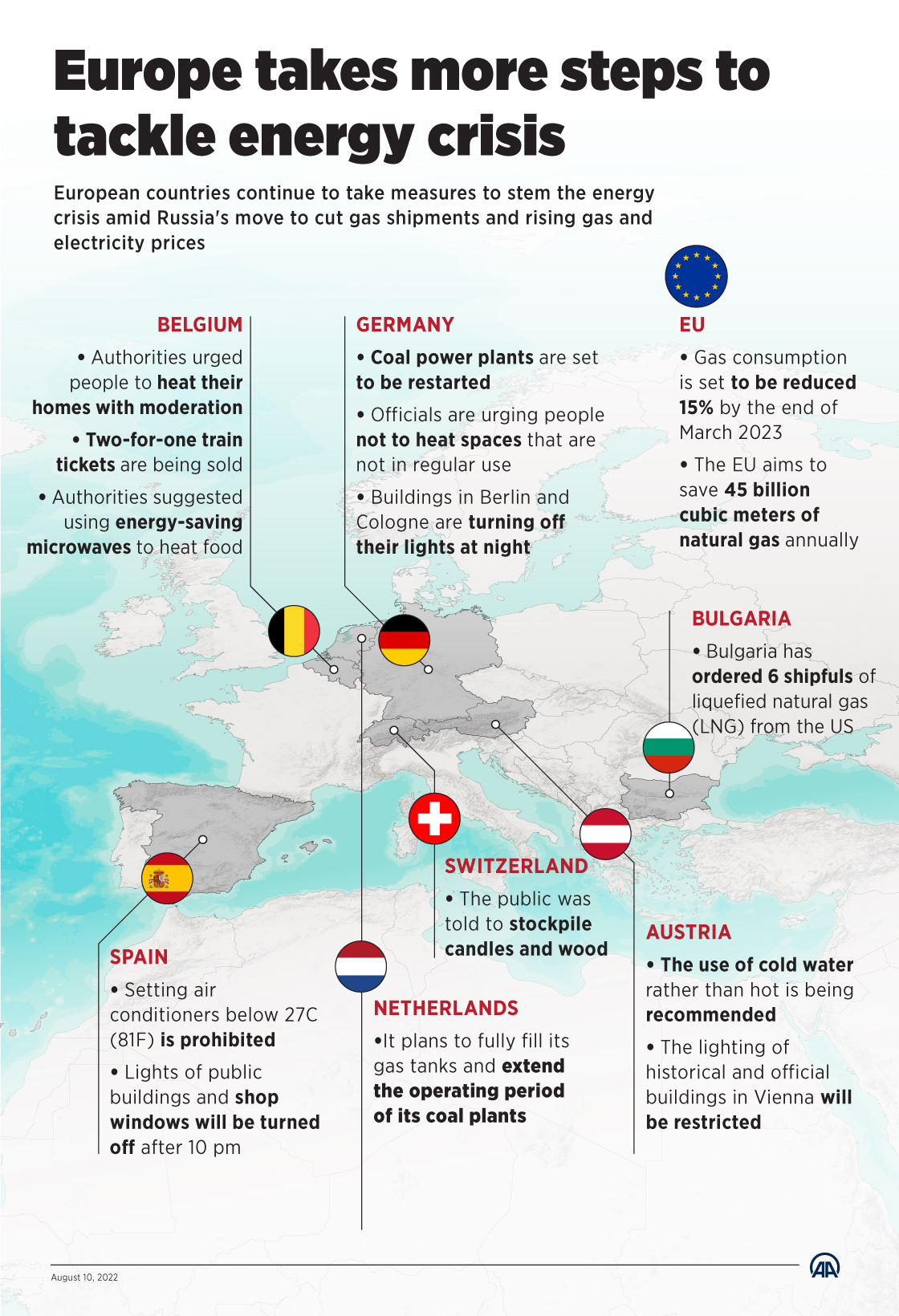 TechNamu said:
Even a major natural gas & LNP exporter Australia is considering to curb gas export to avert the gas supply shortfall in the domestic market. It is going to be a very cold winter for Europe.
Click to expand...

Stupid ass greens want to ruin it all honestly we will end up just like Germany.

All for this climate change bs.
T

Ryder said:
Stupid ass greens want to ruin it all honestly we will end up just like Germany.

All for this climate change bs.
Click to expand...

If both state & federal governments issue more license for oil and gas exploration and development, Australia won't even need to suffer any gas shortage in the domestic market. In fact, Australia could have been swimming in oil & gas money like rich Arab countries currently are by selling oil & gas at inflated prices to European & Asian markets.

Well, I believe the reasonable will prevail at the end as the gov't will be forced to choose either sticking with climate change bs or upseting the people with higher energy bills. They can't continue to pretend the emissions reduction policy doesn't hurt the poor. It is simply unsustainble.
Last edited: Wednesday at 8:18 PM

TechNamu said:
If both state & federal governments issue more license for oil and gas exploration and development, Australia won't even need to suffer any gas shortage in the domestic market. In fact, Australia could have been swimming in oil & gas money like rich Arab countries by selling them at inflated prices to European & Asian markets.

Well, I believe the reasonable will prevail at the end as the gov't will be forced to choose either sticking with climate change bs or upseting the people with higher energy bills. They can't continue to pretend the emissions reduction policy doesn't hurt the poor. It is simply unsustainble.
Click to expand...

Australia is a big country I kid you not we are swimming in so much potential.

Even we benefit from a big eez because we are an island nation.

Australia has lots of potential that needs to be used.

Electricity bills are starting to rise and for heating we use a woodfire heater. My dad loves wood fire heaters rather than ducted heating.

You save on bills but still its rising slowly. Hopefully a plan is in place to avert an energy and gas crisis.