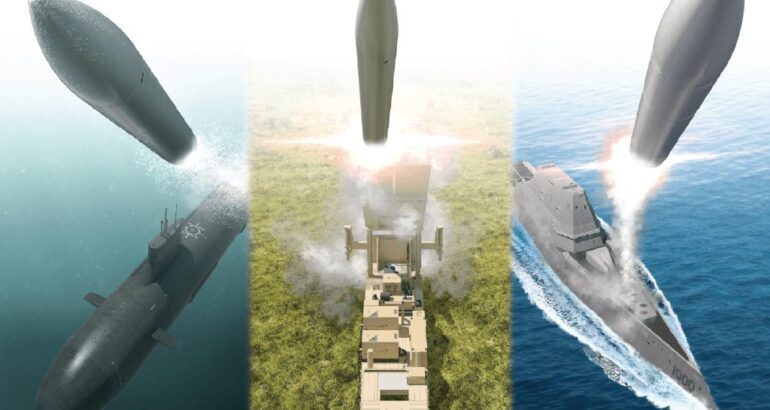 A Naval News reader has tipped us off with the first artwork of the Conventional Prompt Strike (CPS) hypersonic missile on the DDG 1000 Zumwalt-class stealth destroyers.​

Peter Ong 19 May 2022
According to the Lockheed Martin® graphic, four CPS silos are substituted for the removal of the first 155mm Advanced Gun System (AGS) turret while the second 155mm AGS is still retained.

First reported by the U.S. Naval Institute (USNI) in March 2022, this artwork follows what the U.S. Navy’s Chief of Naval Operations (CNO) Admiral Michael Gilday mentioned to USNI about not removing the complete gun hull mounting and extensively modifying the stealth destroyer’s deck and hull. While highly speculative, the Lockheed Martin artwork provides a probable CPS missile outfitting glimpse, but it still remains unclear and unknown on if one or both 155mm gun turrets will be actually removed, but it is a hint at perhaps one of the cheapest and easiest ways to outfit the DDG 1000s with the CPS hypersonic missile.

“`There’s enough space and weight margin aboard the Zumwalt-class destroyers to install two tubes for hypersonic missiles without removing the ship’s 155mm gun mounts,’ Chief of Naval Operations Adm. Mike Gilday told USNI News last month.
“By 2025, the first 16,000-ton Zumwalt-class destroyer will have at least two sets of missile tubes inserted on the port and starboard sides of the ship without having to remove the guns mounts,’ he said.
“`There’s plenty of room right now for those modules,’ Gilday told USNI News during a visit to General Dynamics Electric Boat.” 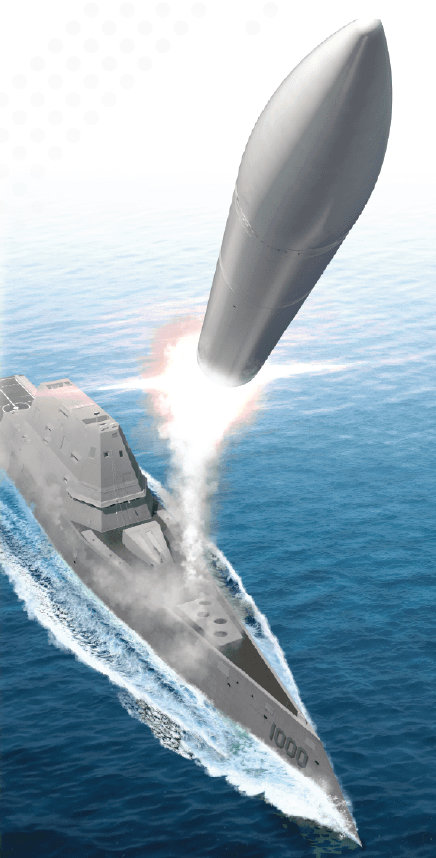 Lockheed Martin’s artwork showing the launch of a single Conventional Prompt Strike (CPS) hypersonic missile from the removed forward 155mm AGS location. Four CPS silos might take the place of one 155mm AGS location and are staggered for survivability and to fit into the gun ammunition spaces. The CPS missile can fly at speeds greater than Mach 5+ for 1,725 miles. Lockheed Martin image.​
For speculative discussion purposes, the Lockheed Martin® artwork provides support to CNO Admiral Gilday’s option to retain the 155mm AGS mounts, especially when the mounts are still affixed to the deck.

Naval News does not know who drew the Lockheed Martin graphic or the date it was created, but the artwork does coincide with CNO Gilday’s suggestion.

The U.S. Navy’s Naval Sea System Command (NAVSEA) has repeatedly told Naval News that all options were on the table before the decision to integrate the Conventional Prompt Strike (CPS) hypersonic missiles into the hulls of the Zumwalt-class destroyers. These options include finding a newer and cheaper 155mm Extended Range GPS-guided shell to replace the canceled ammunition program that had each GPS Extended Range shell cost around $800,000 each due to the decision to build just three DDG 1000s. If the second 155mm AGS is indeed retained, then the U.S. Navy still has the option of providing the U.S. Marines future shore bombardment from a custom 155mm cannon that has more range that the Navy’s current 5-inch guns, but the second AGS still cannot accept or handle U.S. Army and NATO-standard 155mm shells.

The Lockheed Martin artwork shows four CPS silos staggered in the first gun mount with the turret cover, loading system, ammunition, transfer carts, and barrel removed. The staggering is possibly due to the gun ammunition spaces still being retained inside the hull, preventing side-by-side install of the CPS missile as carried by the U.S. Army’s M870 trailer due to the tapered shape of the 155mm AGS hull mounting. Staggering CPS placement also increases survivability in case a hypersonic missile is hit, then the adjacent CPS missile might not “cook off” from the explosion. The 0.87-meter CPS hypersonic missile is larger in diameter than the Mark 41 and Mark 57 Vertical Launch Systems (VLS) and will not fit inside existing U.S. Navy VLS cells; the CPS requires its own silos. 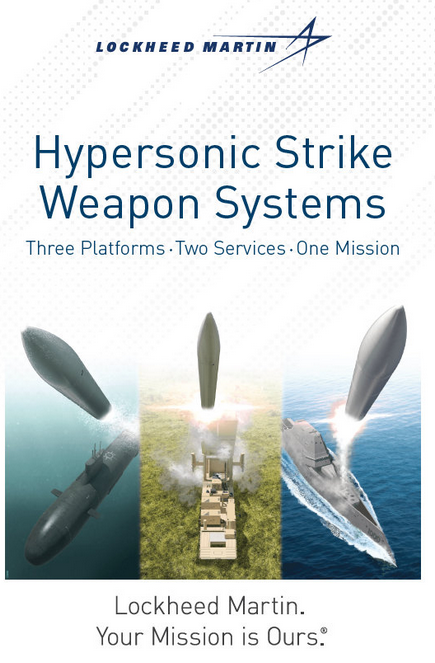 If indeed four CPS missiles are installed per Zumwalt destroyer’s first 155mm AGS mount, then with only three DDG 1000s in service (DDG 1000 Zumwalt, DDG 1001 Michael Monsoor, and DDG 1002 Lyndon B. Johnson), the U.S. Navy has the option of sailing twelve ready-to-fire hypersonic missiles into the Pacific at one time. If both155mm AGS mounts are removed, then eight CPSs might be installed per destroyer and the U.S. Navy has the option of sailing twenty-four, double the amount, of CPS hypersonic missiles into the Pacific. NAVSEA has repeatedly stated to Naval News that both gun mounts will be removed, but this goes against what Admiral Gilday has mentioned and the final decision still remains unclear.

Hypothetically, Lockheed Martin’s artwork option of just removing the forward 155mm gun mount and hollowing it out is possibly the quickest and cheapest way of getting four CPS missiles into the hulls of the Zumwalts and into the Pacific theater because doing so won’t require extensive deck replacement work (note that the forward 155mm AGS’s base is still present in the artwork). In the 25 April 2022 Naval News article, the U.S. Army has reported that they have live prototype hypersonic rounds mounted on a M870 trailer, pushing the U.S. Navy to make a decision as to the fate of the Zumwalts’ 155mm AGSs. NAVSEA informed Naval News that the remaining spaces around the CPS silos will not be filled with Mark 41 or Mark 57 VLS cells.

No matter what the decision is, to remove one or both 155mm AGS mounts, even mounting four CPS hypersonic missiles on each Zumwalt will alter the firepower balance for surface strike for the U.S. Navy, giving the stealthy Zumwalts a special and unique purpose as the only existing U.S. Navy surface warships armed with the nation’s first naval hypersonic missiles with a range of 1,725 miles (2,775 kilometers) and fly at speeds greater than Mach 5+ to hit targets with a hypersonic Glide Body (HGB) vehicle, destroying the target with massive kinetic energy alone. 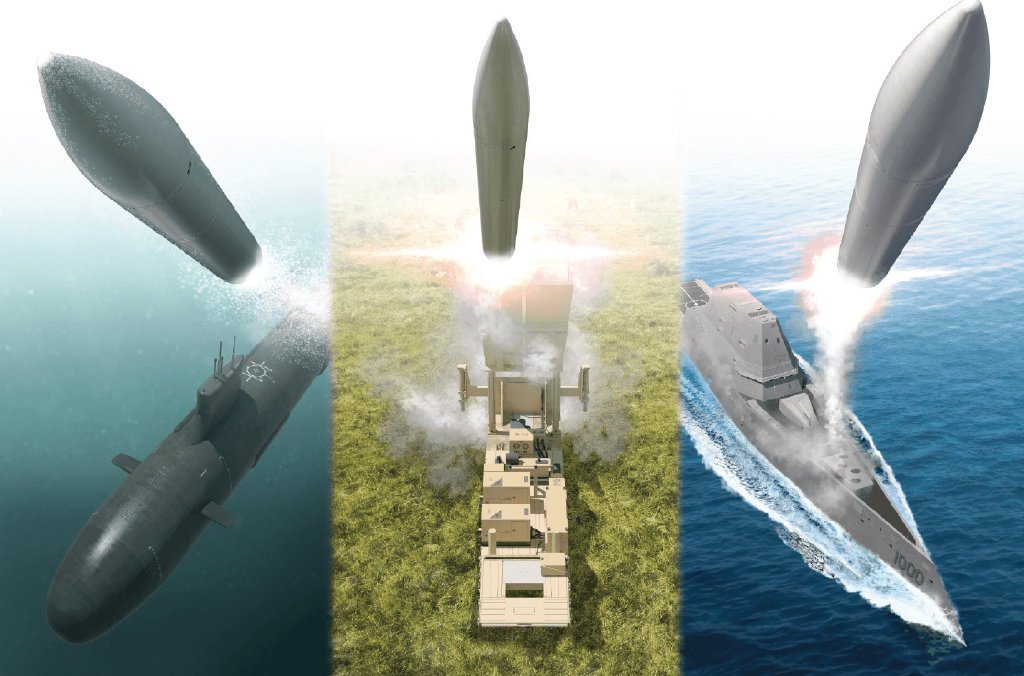 A Naval News reader has tipped us off with the first artwork of the Conventional Prompt Strike (CPS) hypersonic missile on the DDG 1000 Zumwalt-class stealth destroyers.

8 missiles at max? The US hypersonic must be larger that its Chinese yj21
R

Zumwalt class would be perfect for modern non-carrier operations of the American navy, against Russia and China, and of course they only build three of them and remove the naval guns. To replace them with to be build conventional destroyer and a French designed conventional frigate. I am very disappointed, as the Americans will have not operational and strategic change on the battle over the sea's, even with the modern weapon systems they are building, which the Zumwalt was design to use. They scrapped that program too soon, just when it was coming online and now technology and systems are catching up to the ship.
A

Lordimperator said:
8 missiles at max? The US hypersonic must be larger that its Chinese yj21
Click to expand...