beijingwalker said:
Wages go up and down, it's very natural, during the pandemic , many industries decrease and increase their wages, it's very common all around the world, China's unemployment rate is still very low in the world. 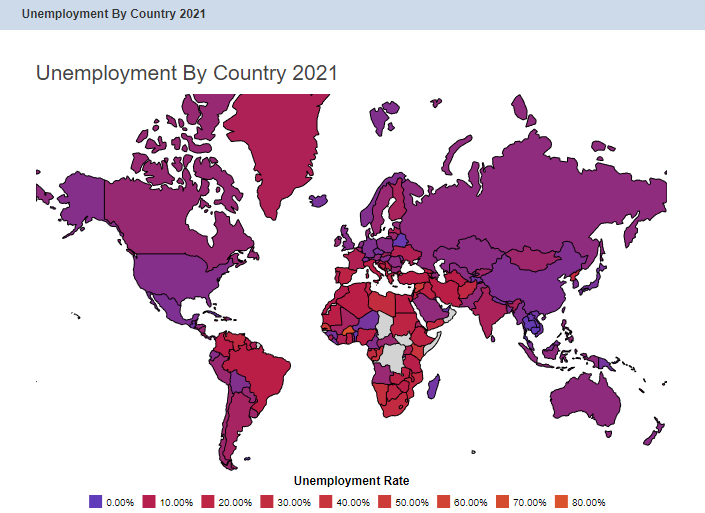 When CN's population drop to 100 million or even 50 million instead of 1,4 billion, due to CN's birth rate keep dropping fast when million Cnese realize that its hopeless to find jobs after 35 year old, then u don't have to worry abt Coal consumption anymore

A factory's or an industry's wage change means nothing to a whole country's overall wage level, China's wage in general still goes up every year, so your example of a factory or a specific company's situation means nothing, companies raise and lower their pay all the time in every country, check out the national statistics and get a bigger picture.

Average annual salary of an employee in China 2010-2020. In 2020, an employee working for a non-private company or organization in urban areas of China earned around 97,400 yuan annually on average. That year, the year-on-year growth rate of the average salary ranged at 7.6 percent nominally and 5.2 percent real. 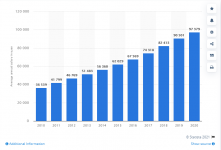 beijingwalker said:
Average annual salary of an employee in China 2010-2020. In 2020, an employee working for a non-private company or organization in urban areas of China earned around 97,400 yuan annually on average. That year, the year-on-year growth rate of the average salary ranged at 7.6 percent nominally and 5.2 percent real.

Yeah, so how many Chinese employee still got higher salary this year ?? only few millions over 800 million CN workforces ?? can they still keep those jobs till 50 year old ??

Viva_vietnamm said:
Yeah, so how many Chinese employee still got higher salary this year ?? only few millions over 800 million CN workforces ?? can they still keep those jobs till 50 year old ??
Click to expand...

No different from other countries, but unlike most countries, China's economy grew last year , especially in maunfacturing sector due to the surge of demand globally, the rest of the world was all shut down and China was the only country that production functioned normally, so many employee in this sector got big a salary boost.

beijingwalker said:
No different from other countries, but unlike most countries, China's economy grew last year , especially in maunfacturing sector due to the surge of demand globally, the rest of the world was all shut down and China was the only country that production functioned normally, so many employee in this sector got big a salary boost.
Click to expand...

" so many employee in this sector got big a salary boost ", nice...but why CN's birth rate still dropping ?? bcs "so many employee" actually less than 200 millions while the rest (600 million CNese employee) lost jobs or salaries cut half.

Actually means facts, where did you get this "fact‘’, last night in your dream?

beijingwalker said:
Actually means facts, where did you get this "fact‘’, last night in your dream?

And u just try to avoid to explain the reason why CN's birth rate still dropping ?? Even SCMP, Published: 2:00pm, 24 Oct, 2021, has to admit that its bcs of Having grown tired of working long hours in factories for little pay. 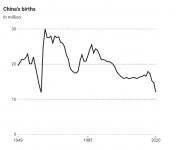 Why has lying flat resonated with ordinary Chinese?​

Similar stories about unmotivated Chinese youth have also circulated in the past. One involved a group of young migrant workers who self-mockingly called themselves the “Sanhe gods” and would roam around the Sanhe area of Shenzhen’s Longhua district. Having grown tired of working long hours in factories for little pay, they instead took occasional one-off jobs as labourers and received cash for a day’s work.

Their motto was, “With one day’s pay, you can have fun for three days.” They slept in public parks, ate instant noodles and spent time in internet bars until they ran out of money. But local authorities eventually cracked down on the “Sanhe gods”, and their story never gained the type of notoriety nor longevity that “lying flat” has.

In the internet era when countless posts feature complaints and gripes about personal struggles and the hardships of life, the concept of lying flat stands out because of its philosophical undertones that serve not as a call to action, but to inaction.

“Since there has never really been an ideological trend exalting human subjectivity in this land, I shall create it for myself,” Luo said. “Lying down is my wise-man movement.”
The ethos struck a chord with much of China’s young and disenchanted workforce that has been hit particularly hard by the nation’s economic slowdown, trade tensions with the West and the coronavirus pandemic.

This followed years of being spoon-fed the rose-tinted propaganda of Xi’s “Chinese dream” with the promise of a bright future for the nation and a “better life” for themselves. It became especially hard to swallow for the millions who have slaved away in China “996” culture of overwork – meaning shifts from 9am to 9pm, six days a week – and still cannot afford a home, much less achieve a happy work-life balance.
And an increasing number have lost the motivation to even try.
Why China’s youth are ‘lying flat’ in protest of their bleak economic prospects
14 Jun 2021

What risks does lying flat pose to China?​

From white-collar workers in China’s bustling cities to university students, an army of frustrated young people took to social media and internet message boards in recent months to declare themselves “‘lying flat youth”.

And across the country, T-shirts printed with “Do nothing lie flat youth” have become hot selling items. Authorities have been scrambling to suppress the phenomenon, fearing that it could challenge the established social and economic order.
In the long run, lying flat could not only affect Chinese consumption and growth, but also lower the birth rate that is already eating up the country’s demographic dividend and threatening its social welfare system, according to economists and social commentators.
Psychologists and doctors also warn that prolonged inactivity raises the risk of life-threatening physical and mental disorders, including heart disease and depression.

It is easy to understand the anxiety of Chinese authorities over the lying-flat attitude, said Dr Gavin Sin Hin Chiu, an independent commentator and former associate professor at Shenzhen University.
“If it becomes widespread, it will affect young people’s expectations of income growth, consumption, marriage and childbirth, which will be detrimental to China’s ability to avoid the middle-income trap, where growth stagnates and incomes stall,” he said. 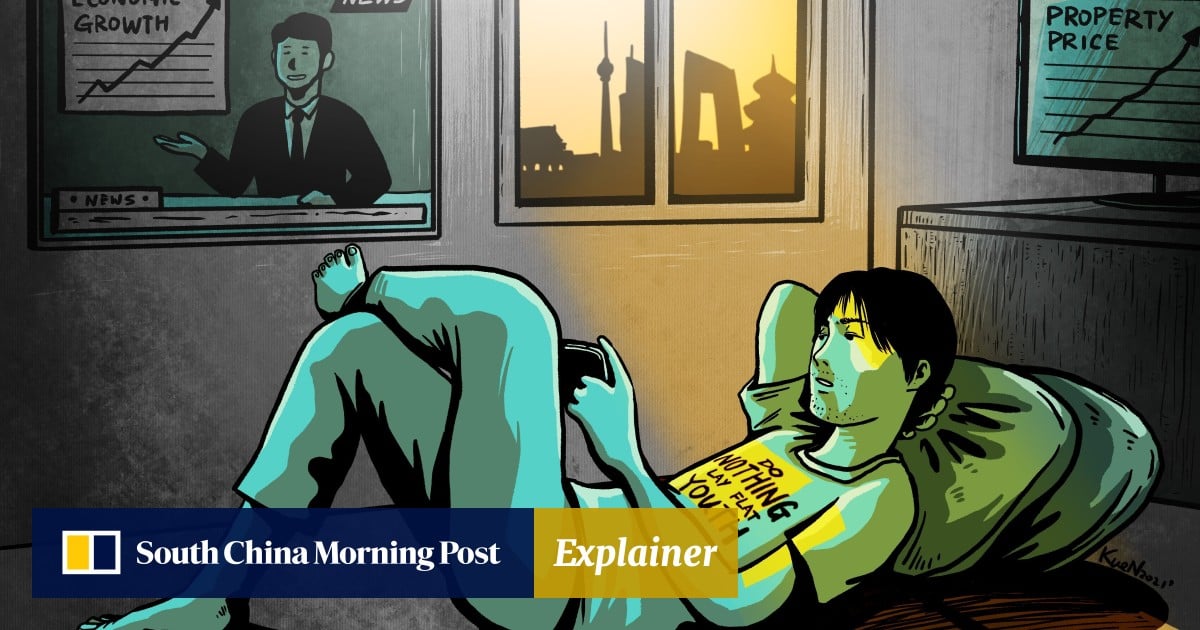 What is ‘lying flat’, and why are Chinese officials standing up to it?

Lying flat, or tang ping in Chinese, means doing the bare minimum to get by, and striving for nothing more than what is absolutely essential for survival, but this ethos poses a threat to President Xi Jinping’s “Chinese dream”.

Viva_vietnamm said:
And u just try to avoid to explain the reason why CN's birth rate still dropping ??
Click to expand...

beijingwalker said:
Do I have to explain the so obvious? Almost all countries experienced this when they developed up to certain level, the birth rate and the development level are almost always the opposite, only super poor countries have super high birth rate, China also had super high birth rate when China was super poor. You really should learn some common sense when you've got time.
Click to expand...

You sound like an old record, repeating the ridiculous nonsense with no facts and figures to back them back, a typical sigan of desperation.

Nilgiri said:
Most of India's coal imports come from: Australia, Indonesia and South Africa....US to some degree as well.

So you can say total consumption in recent years is about 1.1 billion tons of it per year....and about 1/3rd via import.
Click to expand...

Actually Indonesia is the largest exporter to India with 43 % 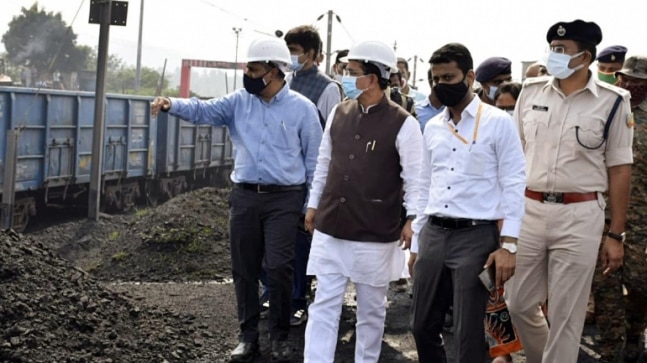 Australians think that only they have coal which is very stupid, all coal needing countries can easily switch to buy coal from other coal rich countries, coal is one of the most abundant resources on this planet.

China is the world factory supplying the whole world with everything, it comes with a hefty energy consumption tag too.
China herself is the world most coal rich country, but China consumes 54.3 percent of the world's coal, China is coal rich but not to the point of having over half of the world total coal reserve. this is why China still needs to import about 8% of total amount of her coal consumption.

What might surprise you is that barely 20 years ago, China was a net coal and oil exporter, back then China's main foreign reserve money was from selling coal to Japan, China even built a special high standard railway solely for this purpose, Daqin railway, and coal from the major coal producing region Datong can be fast transported via the rail to Qinhuangdao port, which is very close to Japan and from there it was shipped to Japan.

Some people are remniscent and nostalgic over those times when China produced more than enough food, oil, coal and everything for herself and exported them in big quantity to other countries, but the real picture is not this simple. Back then China exported raw material and imported manufactured goods, the trade was not in China's favor.
Last edited: Oct 28, 2021

Indos said:
Actually Indonesia is the largest exporter to India with 43 %

I took data from 2019 (OEC)....so amount we got from Australia afterwards seems to have dropped and INA remain the same or more.

I remember PM Vajpai visit in early 2000s when megawati was indonesian president.