The Oct-2020 test was archived here (+/- post range) for reference, many similar salient points are brought up w.r.t this new analysis by Sub-brief:

There is some discussion going on now about the level of mk54 basis/influence/reverse-engg w.r.t pre-existing DRDO systems. 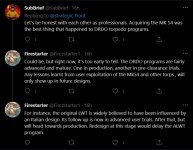 Could the Brahmos deliver a torpedo like the Otomat with MILAT?

crixus said:
Can they put multiple torpedos ( like MIRV) to cover a large area to increase the chances of a hit
Click to expand...

That is technically do-able but likely would make the system too large and cumbersome (and also more detectable during flight) and adversely affect its range envelope (which is already restricted to coastal basis ~ 650km).

If the doctrine here makes sense for it in further testing/exercises, is probably better to shoot 4 separate ones, have them take different trajectories/routes to target if needed and bulk up on the relevant sensor/datalinks/C4I to handle this and their separate final entries/sensor-locking etc as reliable and lethal as possible. i.e essentially it is "MIRV'ed" on shore in a coastal battery or in a ship in VLS later.

MIRV even in BM discipline is relegated to largest strategic missiles for these very reasons....and was also the reason in latter half of cold war, more war-gaming pressure came from further development of tactical-BMs and cruise missiles that afforded more precise use (and thus immediate stand-off threat and all variety of non-MAD doctrines) on military targets.

Philip the Arab said:
Could the Brahmos deliver a torpedo like the Otomat with MILAT?
Click to expand...

Good question, maybe it is being looked at for feasibility since the payload masses seem to work out at first glance.

The issue might be the slowing down from brahmos (its) supersonic speed profile for suitable entry of torpedo into the water and if this can be done in a way to make the delivery system (supersonic speed) worth it compared to improving other variables in such a concept.