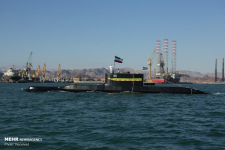 According to information published by Xinhua on March 23, 2021, Iran's Defense Ministry will equip the Islamic Revolution Guard Corps (IRGC) with light and semi-heavy indigenous submarines, Rear-Admiral Amir Rastegari, head of the Marine Industries Organization of the ministry, said. Manufacturing of the submarines will begin this year and the IRGC will be equipped with submarines as the Iranian Arm's Navy, Rastegari told official Islamic Republic News Agency.

In order to protect interests at the sea, Iran needs to develop powerful naval forces, he said.

Lauding domestic capabilities for building the defense equipment, he said that the reliance of the Iranian armed forces on foreign countries in the marine industry has reduced to 20 percent nowadays.

Iranian Fateh class submarine are fitted with 4 × 533 mm torpedo tubes and can carry up to 12 torpedoes ( 4 in the tubes and another 8 on the racks as reloads) or 24 naval mines for anti-submarine (ASW) and anti-surface ship (ASuW) warfare. Much larger 1,000-ton Bethat class submarine is still under development.

Iran will equip IRGC with light and semi-heavy indigenous submarines.