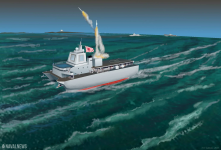 Artist's impression of a JMSDF "Aegis-equipped ship" fitted with the systems initially procured for Aegis Ashore. This design is based on the Hibiki-class and its Small Waterplane Area Twin Hull (SWATH). Image by H I Sutton. [Click to enlarge]


On April 29, 2021, the Yomiuri Shimbun, a major Japanese newspaper, reported that Japan's Ministry of Defense (MoD) is planning a multihull as one of the proposed designs for the Aegis system equipped ship.​

The Aegis System-equipped ship is designed to replace the Aegis Ashore which saw its deployment canceled in 2020. The Japanese government decided to build the ship in December of the same year, but the details of its performance, such as what kind of equipment it will be equipped with, were to be discussed later.

The multihull proposal originally attracted attention when the Japan Maritime Self-Defense Force (JMSDF) released a document on the design of Aegis system-equipped ships on April 9, which included the requirement to have “experience in the design and manufacture of modern multihulls”. The only Japanese shipbuilder with such experience is Mitsui E&S, which built JMSDF’s Hibiki-class ocean surveillance ships, and which will be integrated into Mitsubishi Heavy Industries.

According to the Yomiuri Shimbun, one of the advantages of multihulls is that they are less susceptible to the effects of waves. And they report that “the structure, which is less likely to be shaken by waves, has the advantage of being suitable for launching missiles”. However, this explanation is questionable. It is true that multihulls are resistant to wave, but this does not have much to do with the suitability of a missile for launch. This is because the existing JMSDF Aegis ships, which are monohull, have no problem at all in launching missiles. Furthermore, the Aegis System-equipped ship is an alternative to Aegis Ashore and is expected to be deployed in coastal waters for long periods of time. Therefore, there should be little need to deploy them in the open sea where the seas are rough. Therefore, there are other reasons why multihulls are being considered for Aegis system equipped ship. The multihull has the advantage of a wider deck than the monohull. Therefore, it is possible to mount large structures.

Currently, the MoD is considering to convert the radar and Vertical Launching System (VLS) contracted for Aegis Ashore to the Aegis system-equipped ship. Those systems have already been ordered and paid by the MoD. Work on the program has already started, with the first software release of the Japanese J7.B Aegis Weapon System equipped with SPY-7 radar taking place in February this year.

According to some Japanese reports, the radar contracted for Aegis Ashore, the SPY-7, is high performance and can be used both on land and at sea. However it is large in size and heavier, and in order to put it at sea, the so-called Aegis system equipped ship would have to be larger than the existing JMSDF Aegis ships. If this report is true, then the background behind the consideration of multihull for Aegis system-equipped ship may have to do with the components it will be equipped with.

In addition, a multihull design may be more expensive to build than a monohull one, and in some cases the plan may be changed.

Japan's Ministry of Defense (MoD) is planning a multihull as one of the proposed designs for the Aegis system equipped ship.