Not on agenda yet: Berlin responds to Ukraine's NATO membership aspirations 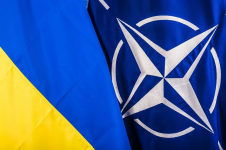 The German government has responded frostily to Ukraine's desire to obtain a Membership Action Plan (MAP) in the North Atlantic Alliance (NATO) as soon as possible. This was reported by dw.com.


According to Ulrike Demmer, a spokeswoman for the federal government, Ukraine "is a very valuable and long-term NATO partner" and the Alliance itself professes an "open door policy". However, "further steps towards membership are currently not on the agenda."

At the same time, Demmer noted that she was very concerned about the escalation of the conflict in eastern Ukraine and the movement of Russian troops in the region.


"We are watching the situation very closely, especially the relocation of Russian troops, and we call on the parties to restrain and immediately de-escalate," Demmer said.


As we reported earlier, Press secretary of the White House Jen Psaki admitted that Ukraine has sought NATO membership for a while now. She said that the U.S. government discusses these inspiration with Ukraine. Psaki said so on April 7.


"We definitely support them, we support [Ukrainians]... but this decision is up to NATO," Psaki said.


The statement was the White House's response to the question about the NATO permanent membership for Ukraine.

Not on agenda yet: Berlin responds to Ukraine's NATO membership aspirations

Well.....atleast they support them, lol

While filling Russia's pockets through North Stream 2.
Click to expand...

And using Russian tech for their submarines.

Nein2.0 said:
And using Russian tech for their submarines.
Click to expand...

I'm a little skeptical about that report, altough I can see the Germans selling tech to the Reds.