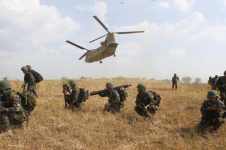 “Our stand on that is we do not honour those laws by the Chinese within the West Philippine Sea because we consider that we have the sovereign right within this waters. So we will not recognise this law of the Chinese,” Lorenzana said during an event marking the Philippines’ Mutual Defense Treaty (MDT) with the United States.


Lorenzana made the statement as he continues his visit to the United States to press for a review of the MDT and to lobby for more advanced military equipment for the Philippines in the face of Chinese territorial threat.
China, which claims historical rights over most of the areas in the South China Sea, amended its Maritime Traffic Safety Law in recent months. It took effect on September 1.

The law requires all foreign vessels sailing in the South China Sea to report their information to Chinese authorities.

A 2016 ruling at The Hague said China’s claim over most of the South China Sea has no legal basis, but Beijing has ignored the decision and has continued to expand its presence in the area, building artificial islands complete with runways and docks, igniting more tensions with neighbouring countries. 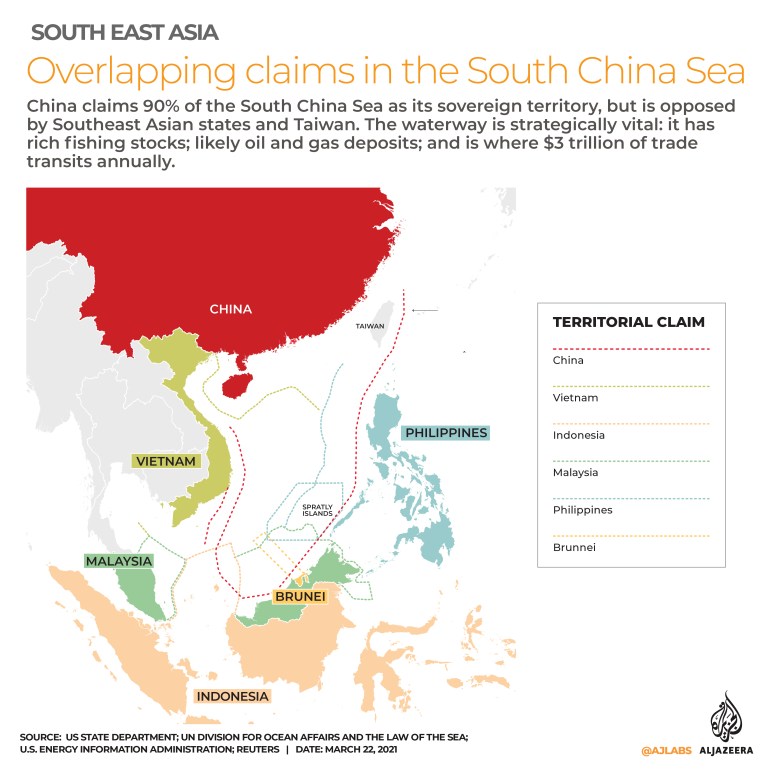 Several Southeast Asian countries, including the Philippines, have overlapping claims with China in the South China Sea.

On Monday, the Chinese state-owned publication Global Times reported that the revised maritime law has taken effect as of September 1.

It covers five types of vessels including submersibles, nuclear vessels, ships carrying radioactive materials, ships carrying bulk oil, chemicals, liquefied gas and other toxic and harmful substances, and other vessels “that might endanger China’s maritime traffic safety”, according to the Global Times.

Beijing clarified that the new law does not hinder freedom of navigation in the South China Sea.

But the US calls it a “serious threat”, and a foreign policy expert has described it as an attempt by China to force other countries to submit to its control by reporting their ships to Chinese authorities.
In January, China also passed the Coast Guard Law that for the first time explicitly allows its coastguard to fire on foreign vessels within their jurisdiction.

Amid concerns over China’s growing dominance in the South China Sea, the Philippines, a longtime ally of the US, wants Washington to increase its military commitments.

Lorenzana, the Philippine defence chief, said it is time for a comprehensive review of Manila’s alliance with the US, saying the Philippines is getting less from its relationship with Washington than even non-treaty allies.

He said there is a need to “upgrade” and “update” the alliance and to make clear the “extent of American commitments”.

“Some questions being asked in Manila are, do we still need the MDT; should we amend it,” he told Washington’s Center for Strategic and International Studies on Wednesday, referring to the 1951 pact. “What is clear is that we need a comprehensive review of our alliance.”

Lorenzana pointed out that the US treaty with Japan, its World War II enemy, was more explicit than that with Manila when it came to determining whether it applied in the Pacific maritime area, where the Philippines has come under increasing pressure from China over rival territorial claims.

He said this explained why seven out of 10 Filipinos supported President Rodrigo Duterte’s call for engagement with China rather than confrontation and more than half doubted US reliability as an ally in South China Sea disputes.

Lorenzana said US-Philippines relations would “have to evolve in recognition of new geopolitical realities, most especially the rise of China”.

He said Manila and Washington should consider revising the MDT and other defence pacts to ensure both could better respond to “grey zone threats” like state-sanctioned Chinese maritime militia forces that have been intimidating smaller states.

Previously, Duterte had also blamed the US for failing to enforce an agreement it mediated between Beijing and Manila regarding the simultaneous withdrawal of naval forces from the disputed Scarborough Shoal, which until 2012 was administered by the Philippines.

Manila has repeatedly protested what it calls the “illegal” and “threatening” presence of hundreds of Chinese “maritime militia” vessels inside its exclusive economic zone (EEZ) as defined by a 2016 ruling at The Hague.
Hundreds of Chinese vessels were spotted sailing within the Philippine EEZ on several occasions this year, prompting an angry reaction from Manila. But Duterte had also said the Philippines cannot afford to confront Beijing militarily.

In his statement from Washington, DC, Lorenzana echoed Duterte’s complaints about the US reluctance to supply the Philippines with state-of-the-art weaponry.

He said Manila was in the mid of an unprecedented military modernisation programme and needed to move beyond Vietnam War-era hardware that had been provided by Washington in the past. 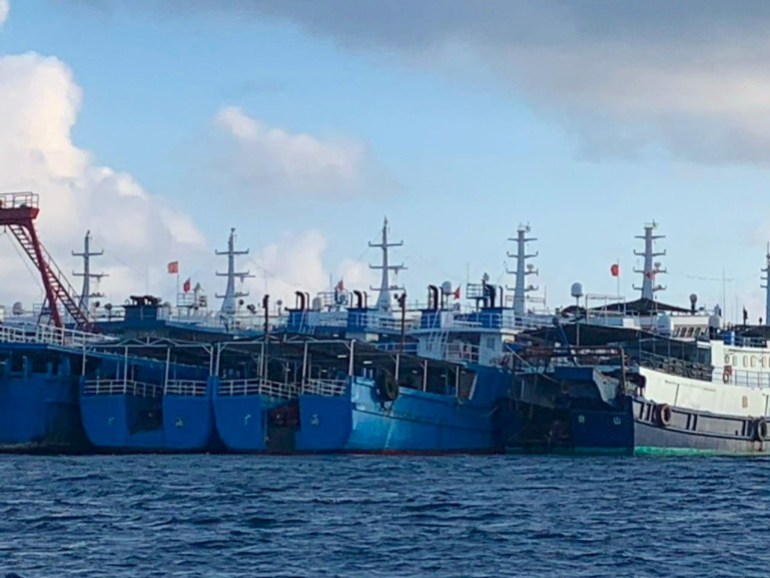 Manila has repeatedly protested against the ‘illegal’ and ‘threatening’ presence of hundreds of Chinese ‘maritime militia’ vessels inside its exclusive economic zone as defined by a 2016 ruling at The Hague.

“Non-treaty allies … have been receiving billion-dollar military aid and advanced weapons systems from the US. Perhaps, a longtime ally like the Philippines, facing major adversaries in Asia, deserves as much, if not more, assistance and commitment,” he said.

Lorenzana’s remarks came after Duterte in July restored the Visiting Forces Agreement (VFA) governing movement of US troops in and out of the country, something strategically vital for American efforts to counter China. While there are no more US bases in the Philippines, the two countries hold annual military exercises until Duterte issued his threat to end the pact last year.

Duterte had pledged to terminate the VFA after Washington denied a visa to a Philippine senator who is an ally of the president.

For Washington, having the ability to rotate troops through the VFA is important not only for the defence of the Philippines, but also strategically when it comes to countering China in the region.
In July, US Secretary of State Antony Blinken repeated a warning to China that an attack on Philippine armed forces in the South China Sea would trigger the mutual defence treaty. 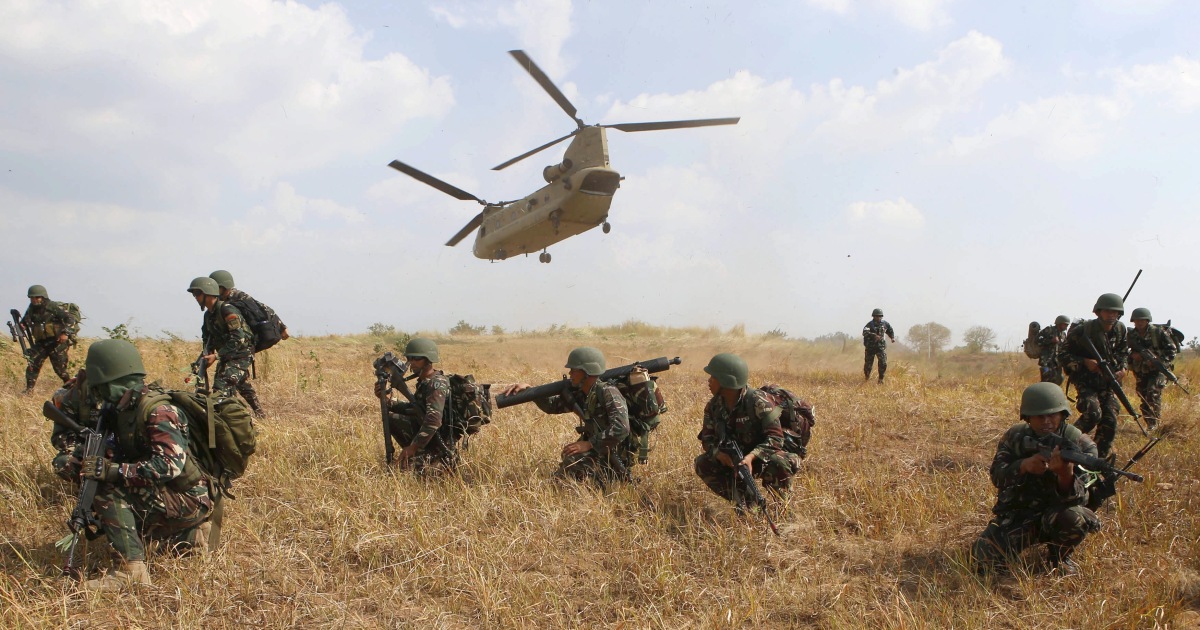