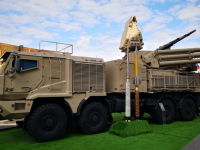 "Russia’s successes in military-technical cooperation prove that the domestic industry is capable of developing new unique products and solutions that are in demand in the market. At the same time, a qualitative renewal of the plants and design bureaus’ fixed assets, their timely retrofitting and upgrading at the expense of funds received from the implementation of state defense orders and export contracts, launches the processes of positive transformation of infrastructure in regions, from household facilities to science schools, technology parks and experimental laboratories accessible to youth," said Alexander Mikheev, Deputy Chairman of the Russian Engineering Union (REU), Director General of Rosoboronexport.

"The enterprises associated in the Russian Engineering Union are a strong growth driver of the Russian economy, which greatly contributes to the development of military-technical cooperation: their high-tech products are heavily exploited by partners from more than 100 countries, in the most challenging climatic and combat conditions," said Alexander Mikheev.

Systemic cooperation with REU enterprises is carried out in all regions of the country, enabling Rosoboronexport to continuously replenish its "library of offset projects" aimed to promptly engage domestic enterprises in drawing up tender bids for foreign buyers.