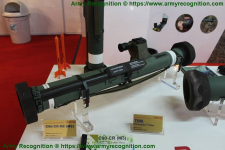 According to information published by the InfoDefensa website on April 30, 2021, the Spanish army has awarded a contract of €22.4 million to the company Instalaza for the purchase of C90 shoulder-fired and one-man operated rocket-propelled grenade launcher.

The contract includes the purchase of six different models and training systems. The Spanish company Instalaza will provide three versions of its C90-CR and three models of its C90-CS weapon systems.

The C90-CR includes a 2X optical sight and a firing mechanism, both disposable integral parts of the launching tube. A night vision device called VN38-C can be used, it does not require bore sighting and can be attached and removed from the battlefield within seconds. VN38-C includes interchangeable optics in order to be used also for surveillance purposes with 3,3X magnification.

The C90 is considered one of the lightest 90 mm caliber weapon systems in the world with a weight of 5 kg. It has an effective range of 350 m for point targets and 700 m for area targets.

The C90-CS is similar to the C90-CR but can be fired from small confined spaces. As for the C90-CS, the weapon consists of a fiberglass/plastic launcher tube with the rocket inside. and optic and sight systems are mounted in the upper part of the weapon.

The C90-CS and the C-90-CR can be fired from the shoulder and disposable after a single-use. As a single-use weapon system, once the rocket has been fired, the non-reloadable launch tube is discarded.

the Spanish army has awarded a contract of €22.4 million to the company Instalaza for the purchase of C90 shoulder-fired and one-man operated rocket-propelled grenade launcher.