There are Seven Classical Maneuvers of War: penetration of the center, envelopment of a single flank, envelopment of both flanks, attack in oblique order, feigned retreat, attack from a defensive position and the indirect approach. A commander often must employ more than one maneuver to achieve victory; he may try to penetrate the center but fail, feign a retreat and then envelop a single flank. Each has advantages and disadvantages while may be more effective in some situations and less in others. There is also One Modern Maneuver of War: offensive revolutionary/guerrilla. This maneuver has actually been around for awhile but is only now becoming a legitimate, effective means of victory. These maneuvers were first listed by David Chandler in The Art of Warfare on Land.


Penetration of the Center​
This maneuver involves concentrating superior force at the center of the opposing line in order to punch a hole and then to exploit the gap with a reserve force. This maneuver is usually attempted if flanks are protected by obstacles such as rivers. Advantages of this maneuver include the possibility of encircling parts of the opposing army, assaulting rear bases/supplies and the presence of alternative objectives to keep the opposing commander guessing. Disadvantages include the threat of being encircled by a calm commander who counters against weakened flanks and the prospect of a high casualty figure if the opposing commander makes good use of exterior lines to transfer forces to contain the attack. 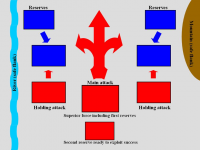 Envelopment of a Single Flank​
This maneuver involves pinning attacks on the opposing center, sometimes a flank as well, while using mobile forces to try and turn the other flank and roll up the line towards the center. This maneuver is one of the most frequently used. Advantages include the possibility of enveloping a portion of the opposing army and usually offer less risk of disaster than other maneuvers. However, disadvantages still include the risk of a counter-stroke against one’s weakened center and other flank. 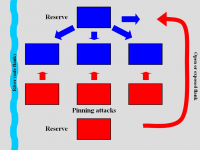 Envelopment of Both Flanks​
This maneuver involves pinning attacks on the opposing center while attacking both flanks in order to encircle the entire opposing army. This maneuver is usually attempted – and should only be attempted – if one has a superior force or exceptional tactical skill. The obvious advantage of this maneuver is complete annihilation of the opposing force while the disadvantage is the danger of a counter-stroke against strung out forces if the encirclement is not strong enough. 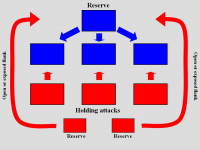 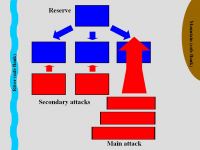 Click here to see how Frederick the Great advanced in oblique order and defeated the Austrians at Leuthen in 1757.
.
Click to see how Gustavus Adolphus is able to survive a bold oblique maneuver and strike John Tserclaes’ weakest point.
.
Click here to see all animations involving the Attack in Oblique Order maneuver.

Feigned Withdrawal​
This maneuver involves staging a retreat in order to induce the enemy to abandon its position and plunge ahead in an attack before turning to surprise the enemy with an ambush. This maneuver is useful if the enemy holds an exceptional defensive position that it must relinquish in order to be defeated. The advantage of this maneuver is the psychological impact the enemy has when being fiercely assaulted while advancing or attacking. The serious disadvantage is that a staged retreat can easily become a real one if morale and discipline are not at a high standard. 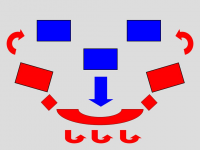 Attack from a Defensive Position​
This maneuver involves luring the enemy to vainly attack a strong, well-chosen defensive position before counterattacking against the exhausted force. Expectedly, this maneuver is used if such an impenetrable defensive position is available or if a direct offensive is not viable. The advantages of this maneuver include the economic use of resources in the defensive mode and that the switch from defense to offense can produce a decisive result. One disadvantage is that the maneuver may become too passive and either be attacked from an unexpected direction or an attack may never come. Another disadvantage is that submitting to encirclement, which is sometimes required, may lead to total annihilation of one’s force. 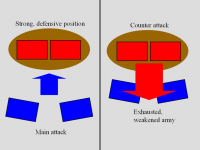 
Indirect Approach​
This maneuver involves distracting the enemy with secondary forces while using the main force to strategically envelop the enemy in rear and flank. This maneuver seeks to force the enemy to react and give battle on unfavourable terms for fear of being cut off from supplies or communications. This maneuver is usually attempted if an aggressive mobile force is available or if enemy supply and communication lines are vulnerable. Advantages of this maneuver include the total victory if the enemy loses a battle while cut off from his base and the prospect of alternative objectives once in the enemy’s rear and flank. The disadvantages of this maneuver are few because the maneuver has so much diversity although mobility and timing are vital to its success. 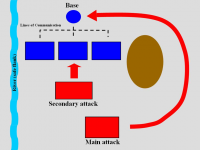 Offensive Revolutionary/Guerrilla​
This maneuver involves using superior political will to eventually defeat a superior force. This maneuver has recently become more popular because of the lack of parity between modern armies’ firepower and more effective because of the power information exerts on people and their governments.