Sexiest of all is Timurid flag no questions asked. Three stars that appeared at Tamerlanes birth that was interpreted as luck. Also red on black background? Yeah baby!

Ardabas34 said:
Sexiest of all is Timurid flag no questions asked. Three stars that appeared at Tamerlanes birth that was interpreted as luck. Also red on black background? Yeah baby!
Click to expand...

I get ptsd from the Timurids in Medieval 2 total war.

My God they fcked me so bad.

Honestly playing as the Turks in all total wars is mission impossible.

All your best units are at late period you are fighting other Muslim factions and you have the crusaders, mongols and the timurids!!

Those elephants trample anything including the gothic knights. Biggest drawback was going amok. Timurids were just too op explains the time period anyway when Timur was op himself.

Did this all by being lame.

Also the biggest insult for me is how the total war series loves copy pasting. Turks and Egypt share units Bullshit!!

Seriously how they group the Turks together and Egypt did not exist apart from being a geographical name ruled by various dynasties. 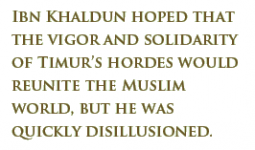 Even Ibn Khaldun felt disallusioned with a united Ummah overtime