Blast In Afghanistan Mosque: The explosion came two days after blasts tore through a high school in a predominantly Shi'ite Hazara area in western Kabul, killing at least six people and wounding 11.​ 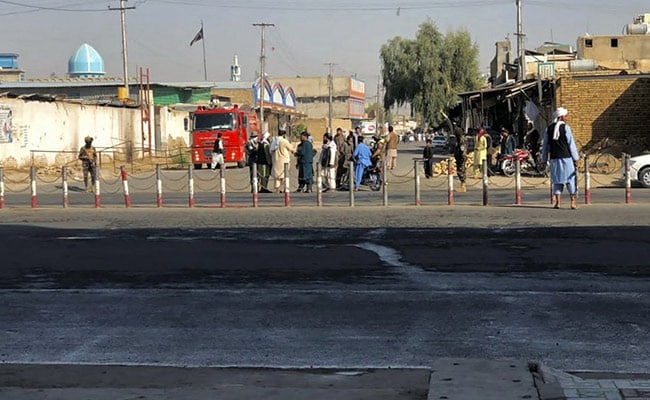 Kabul:
At least 16 people were killed by bomb blasts in two Afghan cities Thursday -- including 12 at a Shiite mosque in Mazar-i-Sharif claimed by the Islamic State (IS) group.

The number of bombings in Afghanistan has dwindled since the Taliban returned to power in August, but the jihadist and Sunni IS group has claimed several since then -- often against Shiite targets.

Grisly images of victims being carried to hospital from Seh Dokan mosque in Mazar-i-Sharif were posted on social media.

"Blood and fear are everywhere," Ahmad Zia Zindani, spokesman for the Balkh provincial public health department, told AFP, adding "people were screaming" while seeking news of their relatives at the hospital.

He said 12 people were killed in the blast and 58 wounded -- including 32 in serious condition.

"Relatives of victims were arriving at city hospitals looking for their near and dear ones. Many residents were also coming to donate blood," Zindani said.
In Kunduz, at least four people were killed and 18 wounded by a blast police spokesman Obaidullah Abedi told AFP was caused by a bicycle bomb targeting a vehicle carrying mechanics working for the Taliban.

Afghanistan's Shiite Hazara community, which makes up between 10 and 20 percent of the country's 38 million people, has long been the target of the IS, who consider them heretics.

"The soldiers of the caliphate managed to get a booby-trapped bag" inside the mosque, detonating it from afar after it was packed with worshippers, IS said in a statement.

On Tuesday, two blasts outside a school in a Shiite neighbourhood of Kabul killed at least six people and wounded 25 others.

No group claimed responsibility for that attack.

Taliban officials insist their forces have defeated IS, but analysts say the jihadist group is a key security challenge.

Since seizing power, the Taliban have regularly raided suspected IS hideouts in the eastern Nangarhar province.

In May last year at least 85 people -- mainly girl students -- were killed and about 300 wounded when three bombs exploded near their school in the Shiite dominated Dasht-e-Barchi neighbourhood of Kabul.

No group claimed responsibility for that, but in October 2020 IS admitted a suicide attack on an educational centre in the same area that killed 24 people, including students.

In May 2020, the group was blamed for a bloody attack on a maternity ward of a hospital in the same neighbourhood that killed 25 people, including new mothers.

Taliban supporters still can't fathom how their state are unable to quash an active insurgency. So blame other countries instead.