China commissioned its first maritime patrol ship with a displacement of more than 10,000 tons On October 23 . 2021, and the vessel is expected to be used in the South China Sea for missions including patrol and emergency support, an official announced on Tuesday.

The deployment of the Haixun09 will enhance the dynamic maritime traffic control and emergency support in Guangdong, guarantee the safety and openness of maritime transport lanes in the South China Sea, boost China’s capability in maritime traffic administration and safeguard China’s maritime interests, according to the report.

Capable of sailing around the globe and conducting rescue missions, the ship will allow China to better participate in international affairs, contribute to exchanges and visits between maritime authorities from countries in the South China Sea, enhance communication and mutual trust and expand consensus and cooperation, the report said.

Designed with a displacement of 10,700 tons, the Haixun09 is 165 meters long and has a speed of 25 knots, Lin said, noting that it can carry multiple types of helicopters for search and rescue operations.

As a large ship it can carry more sailors, personnel and equipment and sail in rough seas, experts said.

It is equipped with many kinds of communication methods including a maritime data center and the BeiDou Satellite Navigation System, giving it strong capabilities for dynamic awareness, monitoring, information gathering and maritime supervision.
Last edited: Dec 3, 2021

The Haixun 09, which displaces more than 10,000 tons, is remarkably ornate for a patrol ship and has some puzzling features.​ 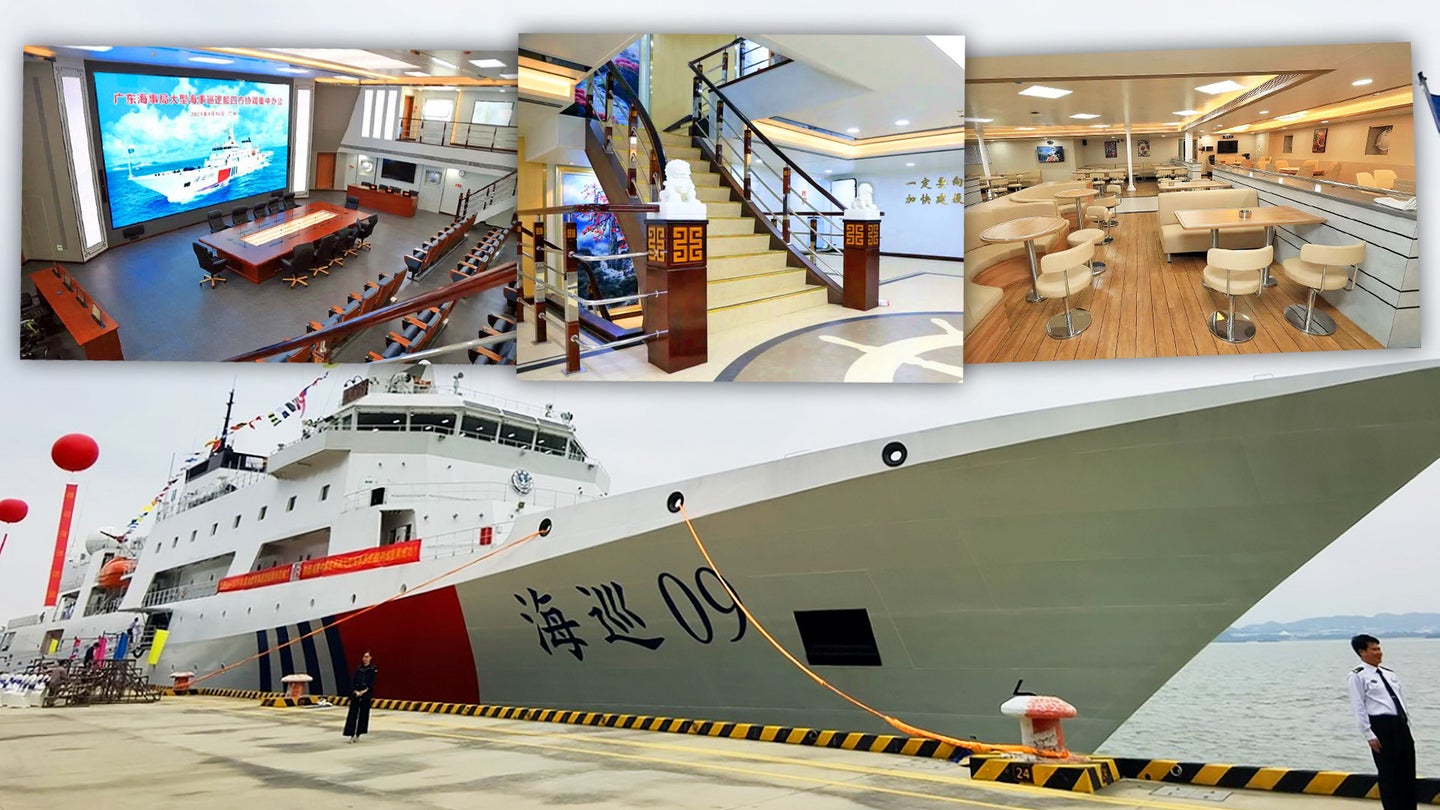 China's civilian Maritime Safety Administration recently commissioned into service what is the country's largest non-military patrol vessel, the Haixun 09. The ship, which is expected to displace around 13,000 tons with a full load, has a number of advanced features, including a highly computerized propulsion system and a robust maritime data center. Interestingly, pictures of its interior show that many spaces are unusually luxurious, being more akin to what one might expect to find on a cruise ship, or even a floating hotel, than a maritime patrol vessel.

The Haixun 09 was commissioned on Oct. 23 at a ceremony in the city of Guangzhou in southern China's Guangdong Province. The China State Shipbuilding Corporation designed the ship, which is just over 541 feet long and around 67 and a half feet at its widest, and construction began in May 2019. The vessel, which has no heavy weaponry but is equipped with water cannons, was launched in September 2020. It also has a helipad and hangar at the stern.

"Haixun will help strengthen maritime traffic control and emergency support, ensure safe and smooth shipping, and protect the country’s maritime interests," Cao Desheng, the Director of the Maritime Security Administration (MSA), said at the time of the ship's launch. "It will also be an important tool for emergency management and cooperation in the global maritime security sector. The plans also call for the expansion of the maritime patrol fleet capable of long-range operations on the high seas by leveraging technological innovation."

The ship can reportedly remain at sea for up to 90 days without needing to refuel or resupply. It is said to have a maximum unrefueled endurance of at least 10,000 nautical miles while cruising at 16 knots, with a maximum speed of around 25 knots.

Haixun 09 reportedly has what Naval News has previously described as an "intelligent engine room system" to help the crew manage both the ship's propulsion and onboard power systems. The vessel is designed to use low-sulfur fuel and has a system to help scrub its exhaust of nitrogen oxides, which can have harmful environmental effects.

Reports also tout Haixun 09's heavily computerized navigation and mission systems. These are said to include a link to China's Beidou satellite navigation network and an array of communication and information-sharing systems in the ship's maritime data center.

Interior shots that have emerged online — and look likely to have been taken either shortly before or during the commissioning ceremony — show the bridge featuring a number of large, wide-area digital displays. One photograph shows a digital map board somewhere in the ship's mission spaces. There is also an auditorium-like space that could be used as a briefing or conference area, as well as a command center, with desks fitted with computers, a main conference table, and a very large projection screen.

Those images, and others, show the ship's interior has a very civilian feel to it, with some spaces being quite well furnished, and even pretty ornate in some cases. This is not necessarily what one would expect the inside of a government law enforcement vessel to look like.

For instance, portions of the bridge and the edges of the digital map board have what looks to be faux wooden trim, a feature seen elsewhere around the ship as well. A number of rooms, including medical bays, have what appear to at least be imitation hardwood flooring, as well. 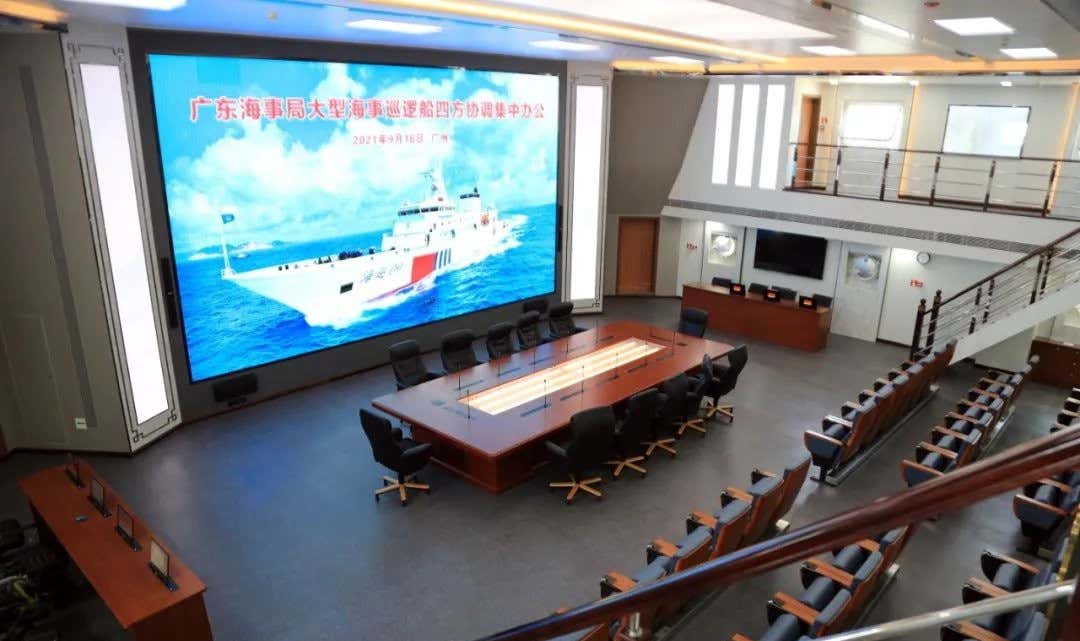 What appears to be a briefing area on board Haixun 09. 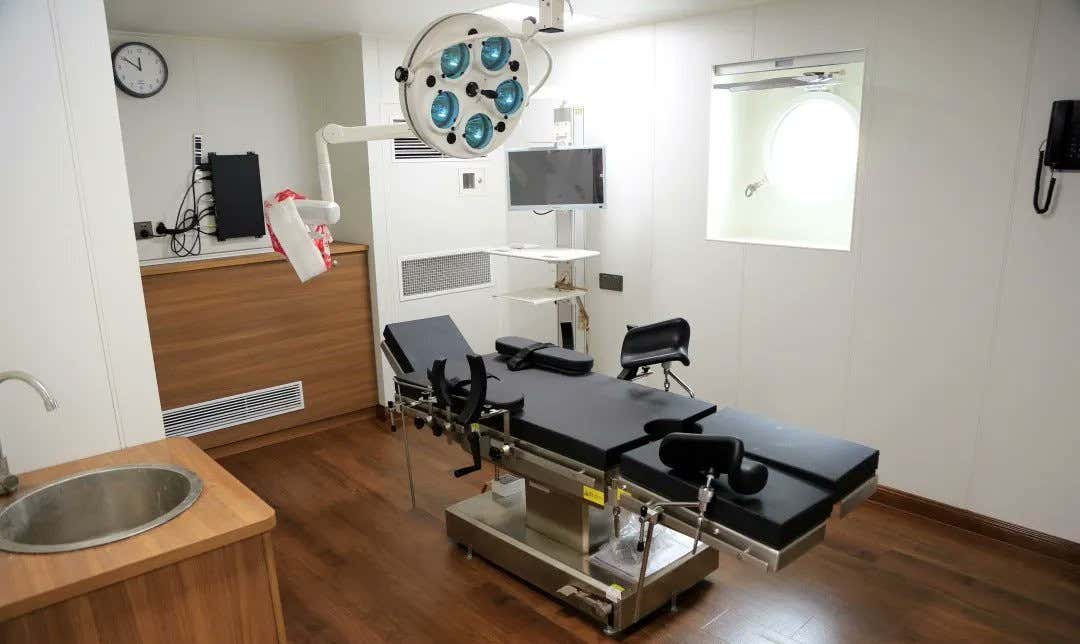 A medical bay on Haixun 09. 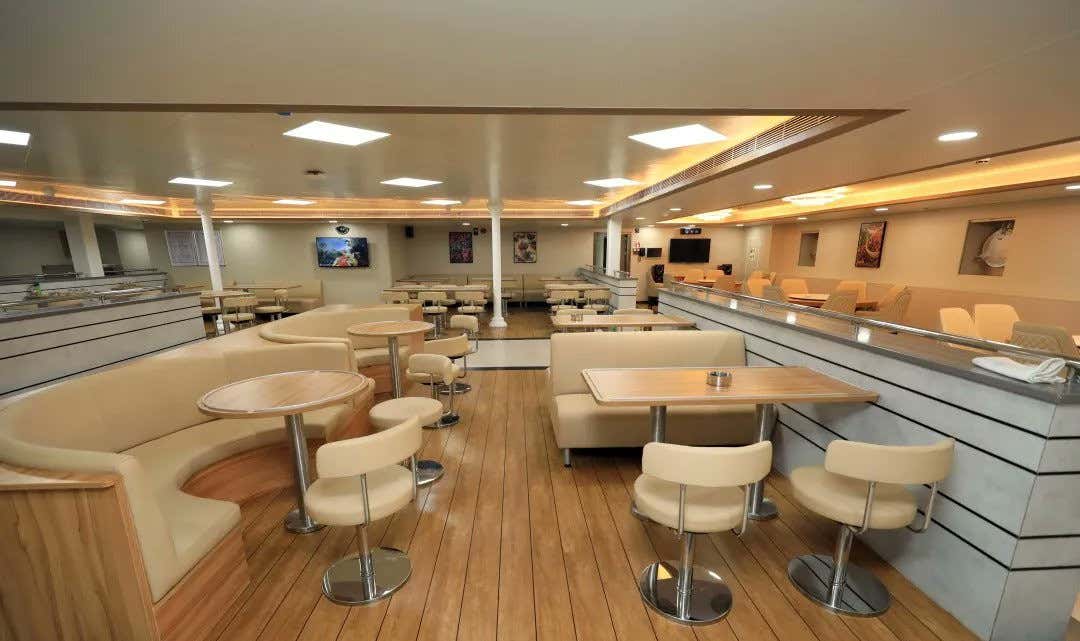 What appears to be a mess hall also has stools and booths, as well as an overall look that is all more in line with a modern restaurant than a government ship's galley. There are other civilian-styled facilities that we can see, including what looks to be a lounge, a gym, and a laundry room. 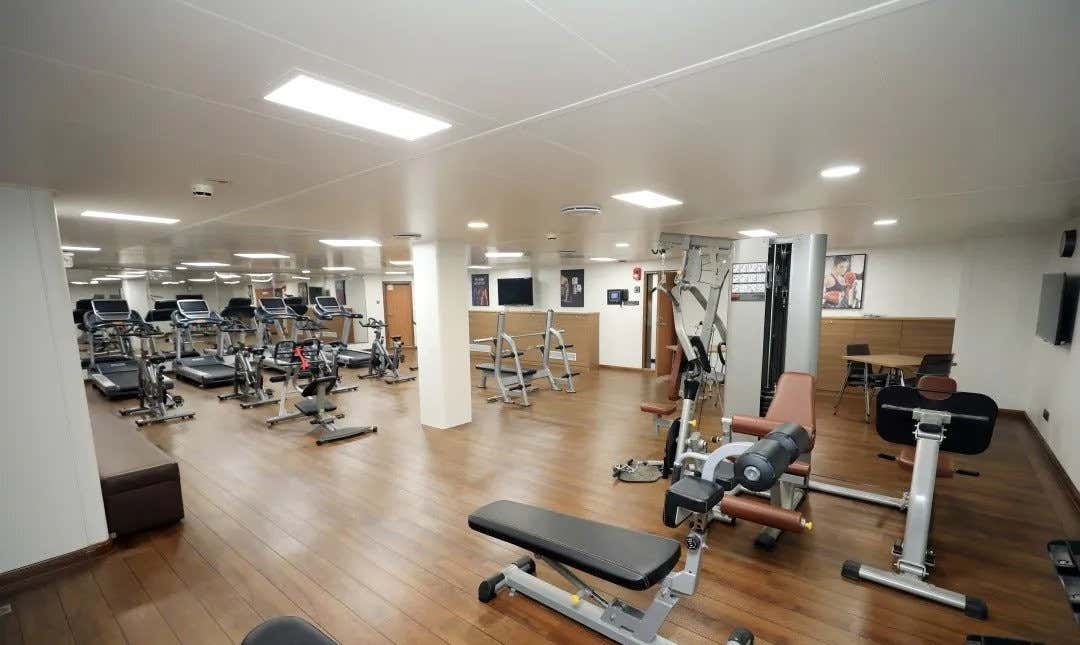 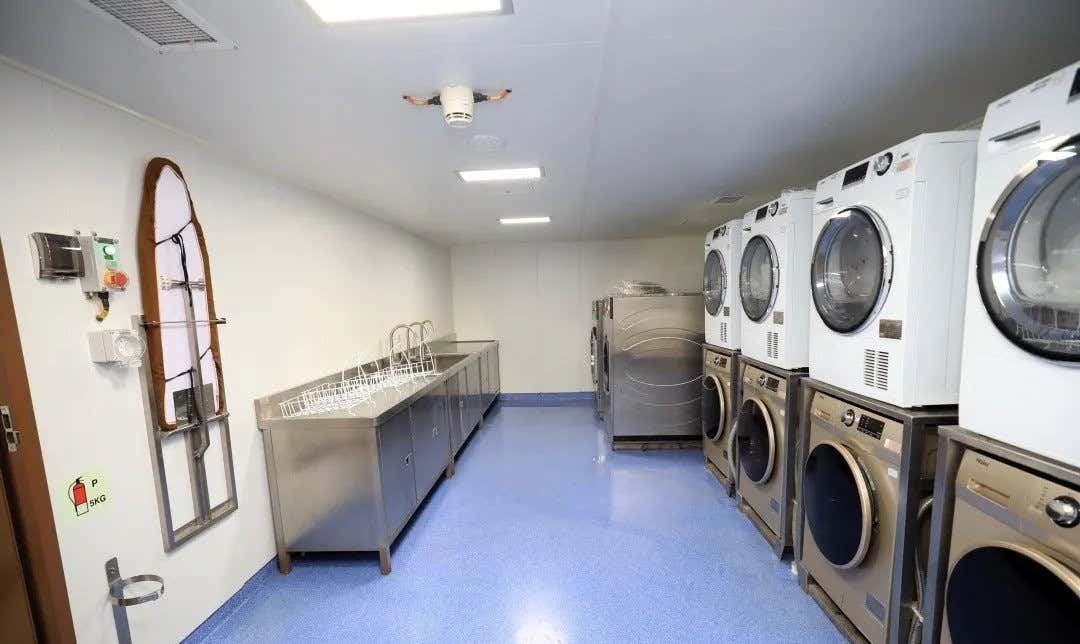 There are even fully furnished offices with plush chairs and full desks. Pictures of one of the quarters, possibly for higher-ranking individuals, show relatively spartan bunk beds, but also televisions and bathrooms with fully enclosed shower stalls. 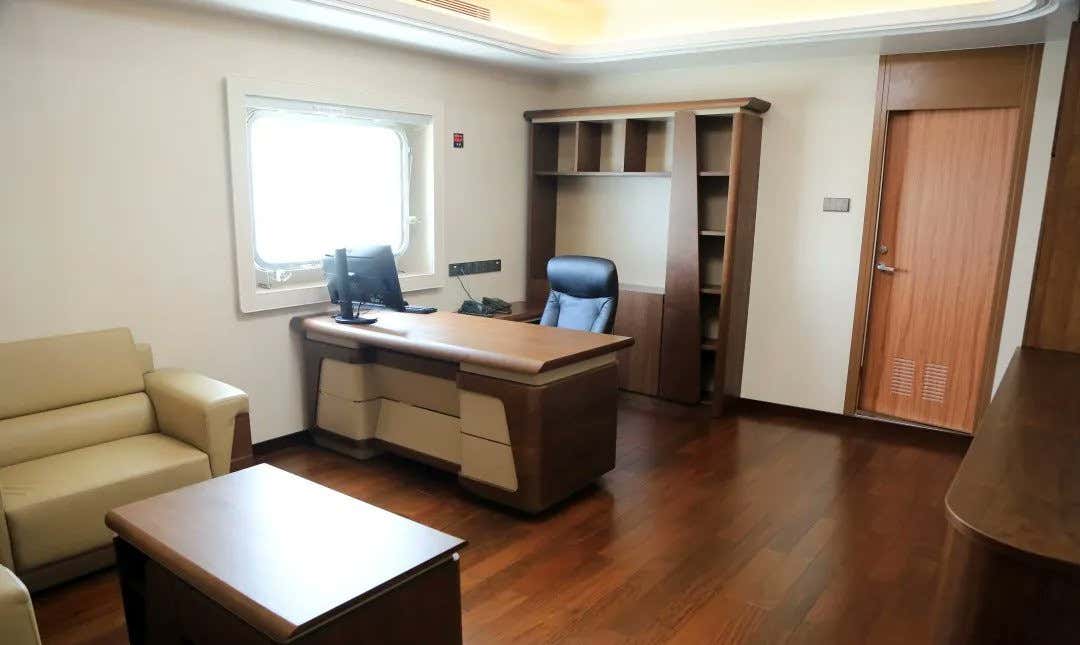 An office on the Haixun 09. 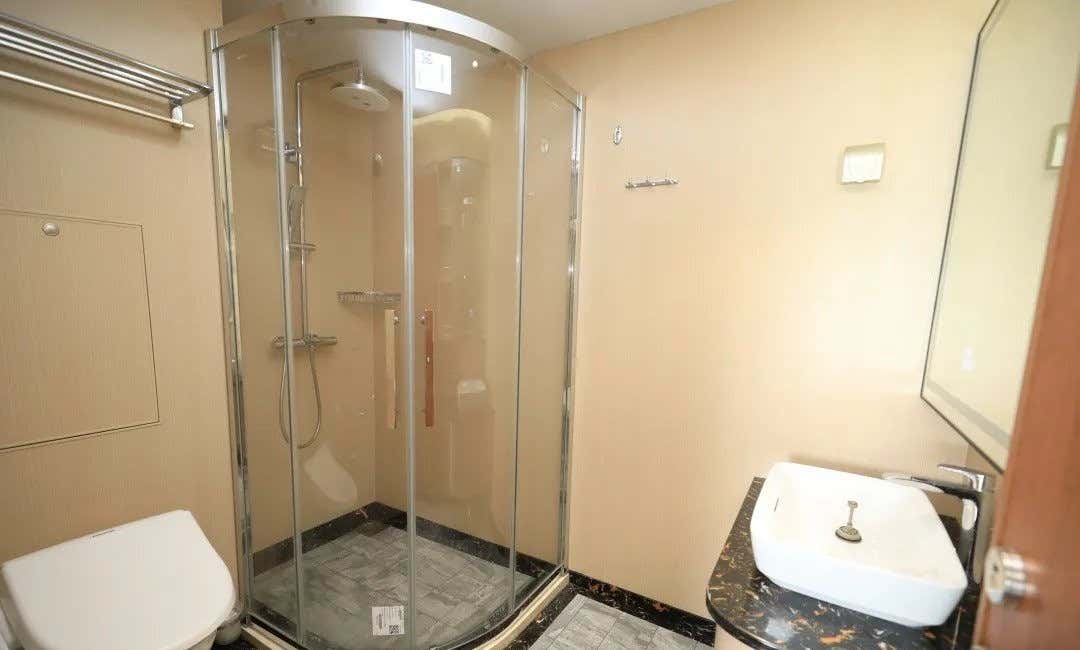 One of Haixun 09's quarters.

By far the most out-of-place area seen in the pictures online is what looks to be the ship's executive suite, which includes a conference room, reception area, and office space, all decked out with classical Chinese art and other features. This includes a stairwell with traditional guardian lions at the bottom ends of the banisters on at least one landing 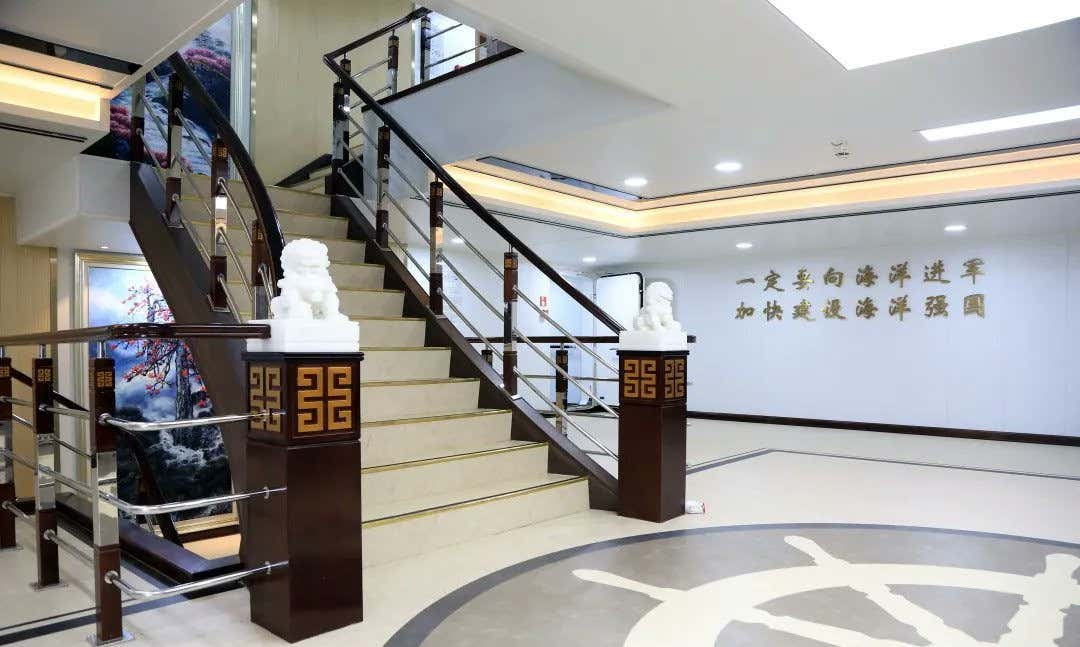 An unusually ornate stairwell. Guardian lions are seen in white on top of the ends of the banisters. 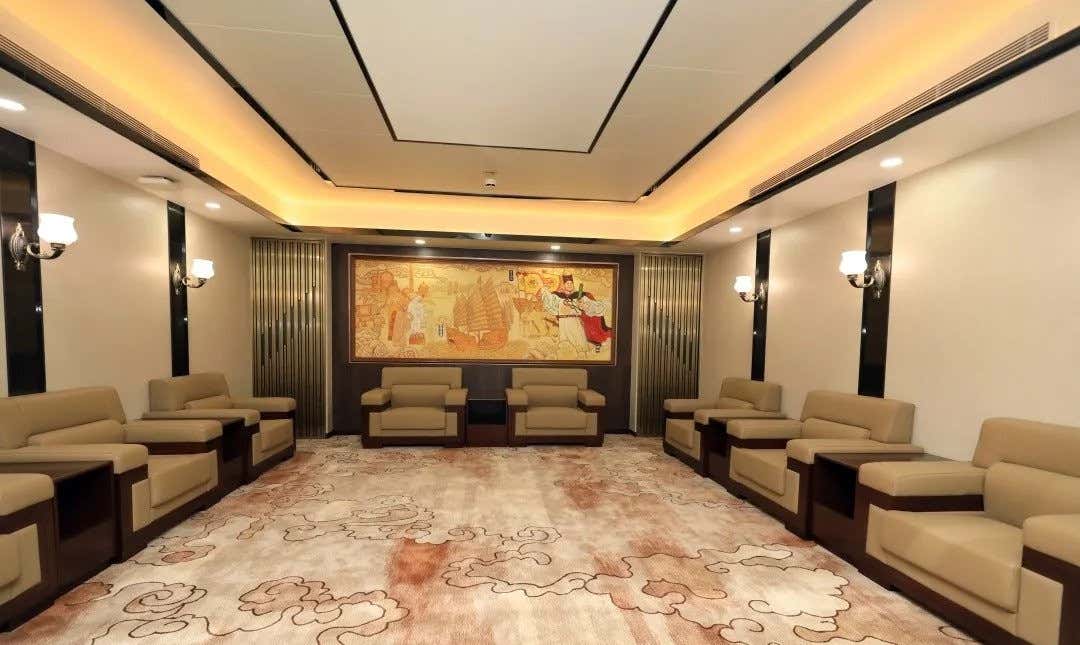 A meeting area with traditional Chinese art on the wall, as well as a rug with a traditional motif. 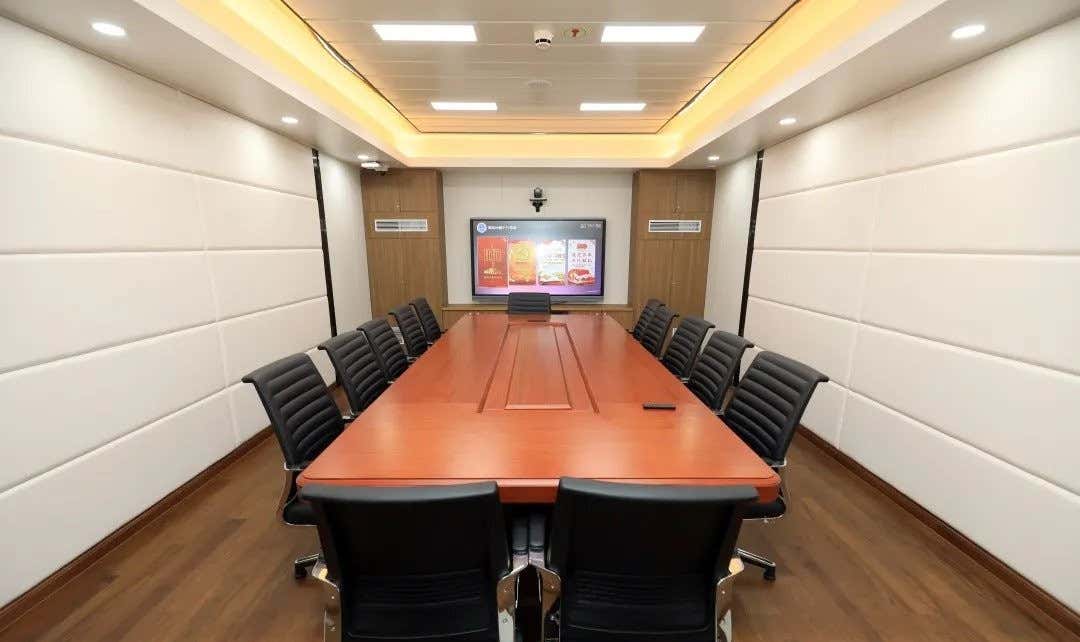 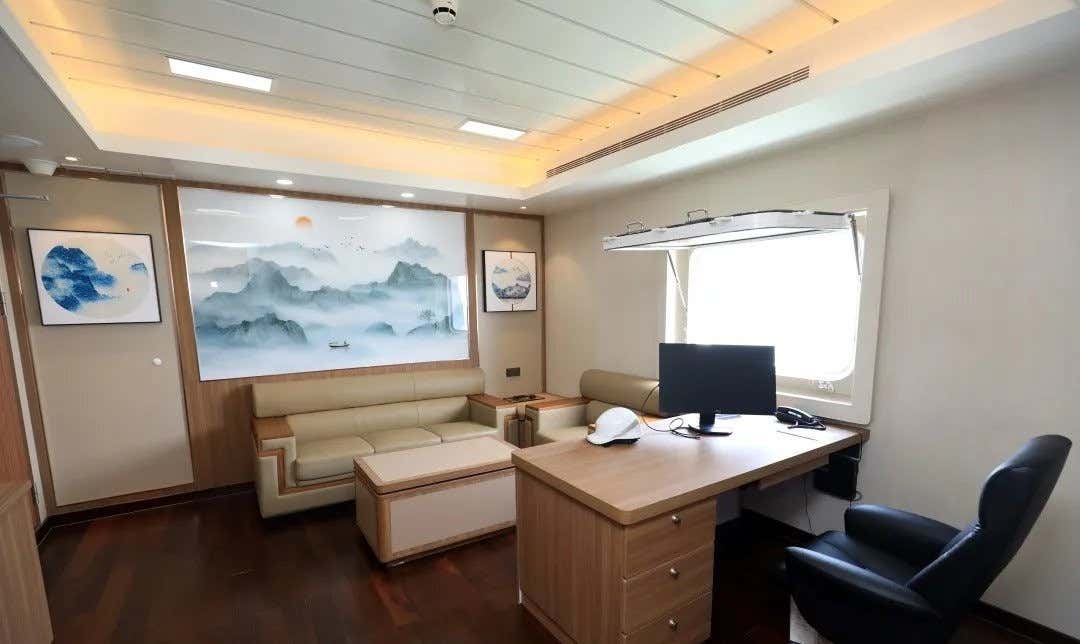 What exactly the reasons might have been for these design choices in the interior of the ship are unclear. The MSA's need for a ship of this size, to begin with, is also not entirely clear.

The MSA, which came into being in 1998 through a merger of the existing China Ship Inspection Bureau and the China Port Supervision Bureau, reportedly has around 1,300 vessels in total. However, with the commissioning of the Haixun 09, it still only has four with displacements greater than 3,000 tons, all of which it acquired in the past two decades.

The most obvious use for a ship of Haixun 09's size and reported capabilities is to help assert China's expansive blue-water maritime territorial claims, especially in the hotly disputed South China Sea. Some of MSA's other larger ships have conducted patrols in the South China Sea in the past.

At the same time, the Haixun 09 is configured in line with the MSA's primary missions of maritime search and rescue, pollution control, monitoring maritime traffic in shipping lanes, and conducting offshore safety inspections. As already noted, it is not armed with heavy weaponry.

This has raised some questions, even from Chinese state media, about its exact utility in helping to enforce the country's territorial claims and otherwise advance its national interests. Beyond more assertive enforcement actions, especially with its interior, the ship could be used as a flagship of sorts in a soft power role, including in the aftermath of disasters or other humanitarian crises, as well as more general international engagements. Some of the MSA's larger ships have conducted similar missions in the past. For example, the 3,000-ton displacement Haixun 31 visited Hawaii as part of an engagement with the U.S. Coast Guard in 2013 and took part in the search for Malaysia Airlines Flight 370 in 2014.

The more luxurious interior spaces inside the Haixun 09 could be especially useful when making port visits, as they would be ideal for photo ops while hosting local dignitaries. The ostensibly civilian nature of the ship would be more fitting for engagements in places where the government in Beijing is seeking to expand its political and economic influence, rather than simply show military force, especially as part of its controversial Belt-and-Road Initiative.

All of this would be similar in some ways to how China has operated its Peace Ark hospital ship, which also has a very modern, civilian-style interior look, despite belonging to the People's Liberation Army Navy.

Collin Koh, a research fellow at Singapore’s Nanyang Technological University's Institute Defence and Strategic Studies, told the South China Morning Post, or SCMP, that much of the modernization and expansion of MSA's fleets has been driven in no small part by a rivalry with the China Coast Guard, rather than operational requirements.

China's current Coast Guard was created in 2013 by merging four previously separate organizations, notably not including the MSA. Since then, it has also been acquiring cutters with displacements of over 10,000 tons as it has taken on a more aggressive role in asserting Chinese territorial claims. In 2018, the China Coast Guard also was placed under military control, with MSA remaining under civilian control.

Still “overall, this will lend to the effect of helping China assert its control in the area, including enforcing navigational rules vis-à-vis foreign vessels,” Koh told SCMP.

It seems likely that the MSA's plans for employing the Haixun 09, with its oddly cruise-ship-like interior, will become much more apparent in the coming months. 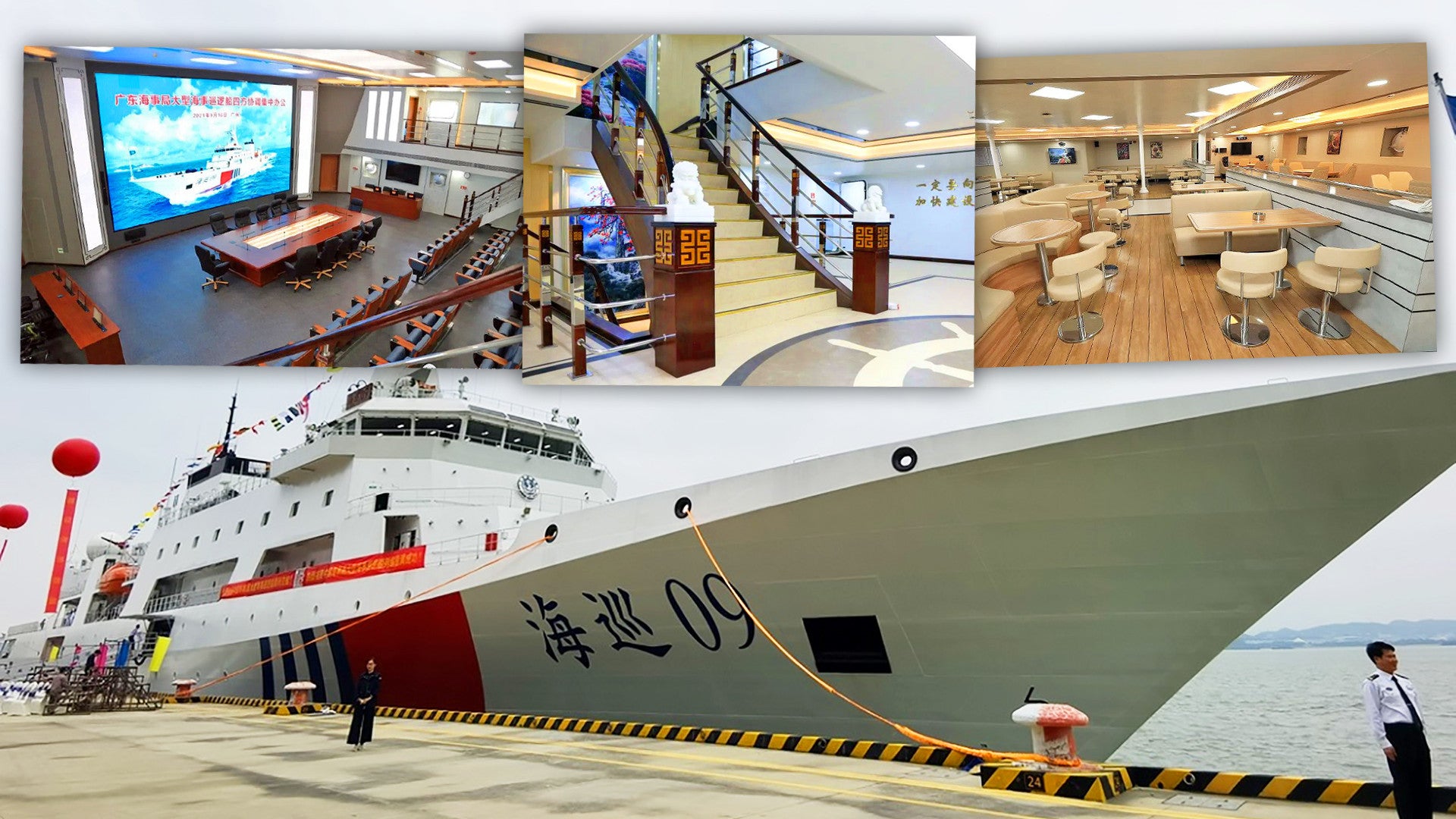 The Haixun 09, which displaces more than 10,000 tons, is remarkably ornate for a patrol ship and has some puzzling features.