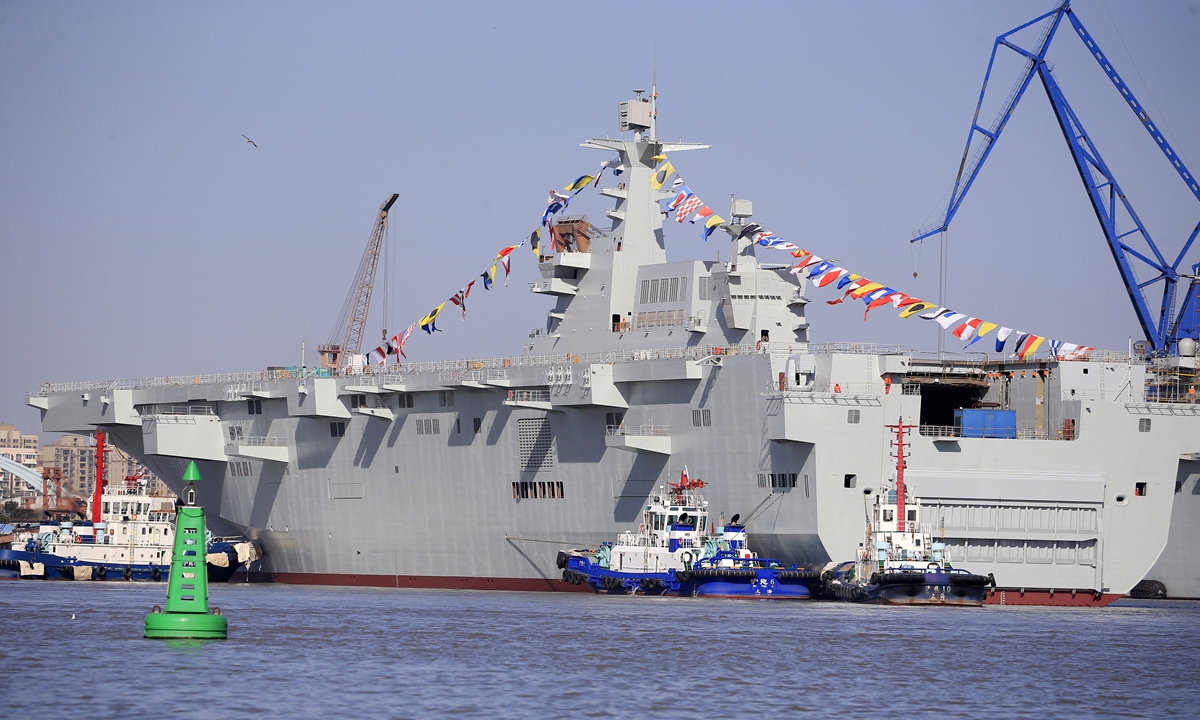 China's third Type 075 amphibious assault ship was launched from the Hudong-Zhonghua Shipyard in Shanghai on January 29, 2021. Many military enthusiasts gathered to witness the launch, and were amazed with the second and third Type 075s now both moored by the Huangpu River bank for further outfitting work. Photo: Yang Hui/GT


The Chinese People's Liberation Army (PLA) Navy's third Type 075 amphibious assault ship recently embarked on what appears to have been its maiden voyage, media reports said on Sunday. Analysts said on Monday that the sea trial indicates smooth progress in the development of the vessel.

This coincided with a navigational restriction notice released by the Maritime Safety Administration of Shanghai on Wednesday, which said that a ship would leave the Hudong Zhonghua Shipyard on Thursday for a sea trial, without giving details about the ship.

Commercial satellite imagery taken on Friday shows that the Type 075 was no longer in the shipyard on that day, hk01.com reported.

The ship was launched on January 29 this year at the Hudong Zhonghua Shipyard.

This means the construction of the third Type 075 is going smoothly and is generally in line with the experience gained from the first ship's development, a Beijing-based military expert told the Global Times on Monday, requesting anonymity.

The first sea trial could feature tests of the ship's basic functions, like the propulsion, navigation and communication systems, the expert said.

If everything goes well according to the basic pattern of ship construction, the third Type 075 could enter service with the PLA Navy next year after several more sea trials, the expert predicted.

Named the Hainan, the first Type 075 eventually entered service on April 23 this year, about 19 months after its launch.

The second Type 075, which was launched on April 22, 2020, was spotted in a recent voyage in October, hk01.com reported at the time, predicting that the ship will be commissioned soon.

The fast, smooth and concentrated construction of the three Type 075s demonstrates that China's shipbuilding industry has cleared technical difficulties in building this kind of vessel at a time when the country has urgent strategic and tactical need for them, analysts said.

Also functioning as a helicopter carrier, the Type 075 has a large, flat flight deck to carry helicopters in addition to carrying air-cushioned landing craft, battle tanks and armored vehicles on its hangar deck in multidimensional amphibious landing missions, according to media reports.

The amphibious assault ships are expected to help safeguard China's national sovereignty and territorial integrity in the island of Taiwan and the South China Sea, as well as overseas interests, observers said, noting that development of the Type 075 serves as a deterrent to Taiwan secessionists. 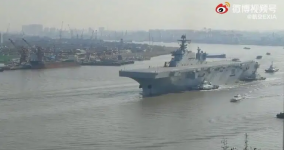 A video shared by a local ship spotter on Bilibili (Chinese video platform) on November 25, shows the landing helicopter deck being towed by tug boats and leaving Shanghai harbour to commence its sea trials.

https://twitter.com/i/web/status/1463900220647882753
The Hudong Zhonghua Shipyard in Shanghai already built the first two vessels in the class. The first Type 075 for the PLAN was launched in September 2019 and started sea trials in August 2020 while the second one was launched in April 2020 and started its sea trials in December 2020. This represents an impressive rate of one LHD launched every 6 months.


A total of eight LHDs are said to be on order for the PLAN. At the moment the same yard is also building the Type 054 A/P frigates for the Pakistan Navy and, it appears, a Type 071E LPD for Thailand.


The first Type 075 LHD, Hainan (pennant number 31), was commissioned with the PLAN during a grand ceremony on 23 April 2021 at the naval base in Sanya (Hainan island) in presence of Chinese president Xi Jinping. The second ship of the class, Guangxi (pennant number 32) should be commissioned by the end of 2021 or early 2022. It was recently spotted arriving at a military port in the East China Sea.

The Chinese Navy officially started development work on the Type 075 in 2011. The project called for a helicopter carrier displacing more than 40,000 tonnes. Its aim is likely to increase the “vertical” amphibious assault capability with the very mountainous East Coast of Taiwan in mind.

A total of eight LHDs are said to be on order for the PLAN while a larger version is rumored to be planned (sometimes referred as Type 076).