TAIYUAN, China/TAIPEI (Reuters) - About 2,000 Chinese employees of an iPhone assembly company fought a pitched battle into the early hours of Monday, forcing the huge electronics plant where they work to be shut down. 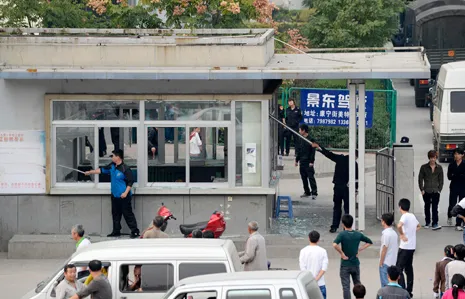 Workers clean up glass shards from the broken windows of a security room near paramilitary police vehicles parked near an entrance of a Foxconn Tech-Industry Park in Taiyuan, Shanxi province, September 24, 2012. REUTERS/Stringer
Authorities in the northern city of Taiyuan sent 5,000 police to restore order after what the plant’s Taiwanese owners Foxconn Technology Group said was a personal dispute in a dormitory that erupted into a mass brawl.

However, some employees and people posting messages online accused factory guards of provoking the trouble by beating up workers at the factory, which employs about 79,000 people and is owned by the world’s largest contract maker of electronic goods.

“The plant is closed today for investigation,” Foxconn spokesman Louis Woo told Reuters. It was not clear how long the plant would be shut while police and company officials investigate the violence, but an employee contacted by telephone said the closure could last two or three days.

Foxconn cited police as saying that 40 people were taken to hospital and a number were arrested, while the state-run Xinhua news agency reported three people were in serious condition.

The unrest is the latest in a string of incidents at plants run by Foxconn, the trading name of Hon Hai Precision Industry Co whose shares fell 1 percent on Monday in a broader market that rose 0.2 percent.

On Monday evening, paramilitary police with riot shields, helmets and batons guarded one entrance of the massive factory complex, while an announcement over loudspeakers said there had been a criminal incident the night before and urged people to respect the law.

The windows of at least three gates’ guard posts had been smashed, piles of glass littering the ground around them, and the railings of some gates lie flat on the ground, having been bent over.

Foxconn, which assembles Apple’s iPhones as well as making components for other global electronics firms, has faced accusations of poor conditions and mistreatment of workers at its operations in China, where it employs about 1 million people.

The company says it has been spending heavily in recent months to improve working conditions and to raise wages.

Foxconn said in a statement the incident escalated from what it called a personal dispute between several employees at around 11 p.m. on Sunday in the privately-managed dormitory, and was brought under control by police at around 3 a.m.


“The cause of this dispute is under investigation by local authorities and we are working closely with them in this process, but it appears not to have been work-related,” Foxconn said. Hon Hai said about 2,000 workers were involved.

Comments posted online, however, suggested security guards may have been to blame. In a posting on the Chinese Twitter-like microblog site Sina Weibo, user “Jo-Liang” said that four or five security guards beat a worker almost to death.

Another user, “Fan de Sa Hai”, quoted a friend from Taiyuan as saying guards beat up two workers from Henan province and in response, other workers set bed quilts on fire and tossed them out of dormitory windows.

Xinhua quoted a senior official with the Taiyuan city government as saying investigators initially determined the fight broke out as workers from Shandong Province clashed with workers from Henan. The agency earlier quoted Taiyuan City’s public security bureau as saying about 5,000 police had tackled the violence.


Calls to the Taiyuan police were not immediately answered, while an official at the plant declined to comment when reached by telephone.

“Clearly there is deep-seated frustration and anger among the employees and no outlet, apart from violence, for that frustration to be released,” Geoff Crothall, communication director at China Labour Bulletin, a labour rights group in Hong Kong, said in a statement.

“There is no dialogue and no means of resolving disputes, no matter how minor. So it is not surprising when such disputes escalate into violence.”

Foxconn does not confirm which of its plants supply Apple, but an employee told Reuters that the Taiyuan plant is among those that assemble and make parts for Apple’s iPhone 5.

In June, about 100 workers went on a rampage at a Foxconn plant in Chengdu, in southwestern China. 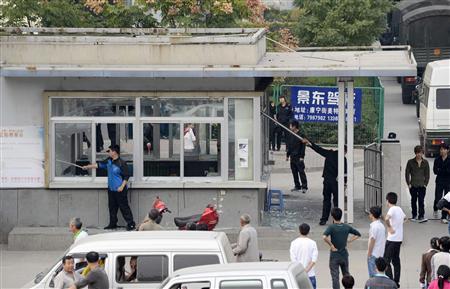 About 2,000 Chinese employees of an iPhone assembly company fought a pitched battle into the early hours of Monday, forcing the huge electronics plant where they work to be shut down.

I don't get it a Taiwanese company establishing a crownjewel like investment in China for Iphone production.