The commissioning ceremony for the medium-range surface vessel was held via video conferencing on 30 September.

Kanaklata Barua is the final in a series of five FPV newbuilds built by local shipbuilder Garden Reach Shipbuilders & Engineers (GRSE) within the national “Make in India” strategy. It was delivered to the coast guard on 9 June.

Featuring a length of about 50 metres and a width of 7.5 metres, the FPVs belonging to this class have a displacement of 308 tonnes, according to GRSE.

The vessels are designed for a maximum speed of 34 knots with an endurance of more than 1,500 nautical miles. Each unit is equipped with three main engines.

The commissioning held on 30 September coincided with the appointment of Krishnaswamy Natarajan as the 23rd Director General of the Indian Coast Guard. 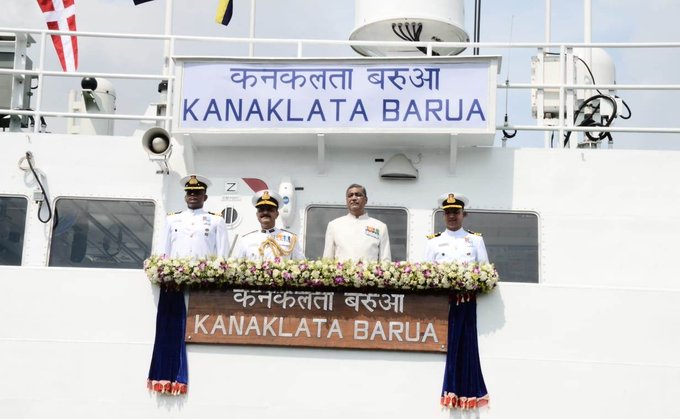 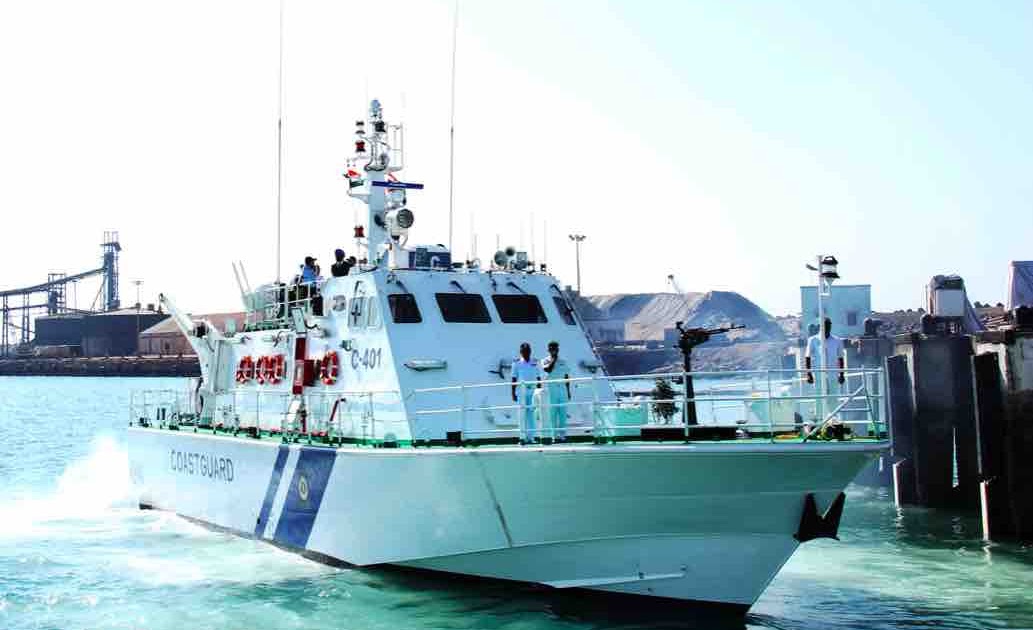 L&T completes order for 54 interceptor boats ahead of time, eyes naval orders ahead

In an emphatic statement of warship building capability in the private sector, Larsen & Toubro’s Hazira shipyard handed over the last vessel in an order of 54 fast interceptor craft to the Coast Guard on Sunday – ahead of time and within the budget.

The FICs delivered to the Coast Guard are 90-tonne vessels that can patrol the coastline at a scorching speed of 45 knots (83 kilometres per hour). L&T has built the 54 vessels for just under Rs 1,500 crore.

L&T is now contending strongly for a number of naval contracts.

The biggest of these, which will indicate how serious the defence ministry is about bringing in the private sector into defence production, is for building six New Generation Missile Vessels (NGMVs) for an estimated Rs 13,600 crore. Multiple shipyards submitted bids in February in response to the navy’s Request for Proposals (RfP).

Earlier this month, L&T and other shipyards submitted bids for building three Cadet Training Vessels – a contract worth an estimated Rs 2,700 crore.

In June, several shipyards, including L&T, submitted bids for a contract, worth about Rs 700 crore, for two Multi-Purpose Vessels (MPVs) for the navy.

Another order in the pipeline, for which bids were submitted in October 2019, is for eight Fast Patrol Vessels, valued at about Rs 750 crore.

Private sector shipyards complain, however, that they are competing for crumbs. Major orders, each worth thousands of crores, for building corvettes, frigates, destroyers and aircraft carriers are awarded to the public sector shipyards “on nomination”, without competitive bidding. 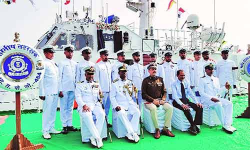 An indigenously built interceptor boat was handed over to the Indian Coast Guard (ICG) at an event at Hazira in Surat district on Tuesday. The vessel will operate from Gujarat under the control of the Commander Coast Guard Region (North-West) of the ICG, a Defence release said. Built by Larsen and Toubro at its Hazira plant, the interceptor boat C-454 was commissioned by Surat Police Commissioner Ajay Tomar in presence of Commander Coast Guard Region (NW) Inspector General Rakesh Pal, and other officials.

“ICG is important for the security of our country. I feel that the quality of this boat is up to the mark and will also increase the strength of the coast guard,” Tomar, who was the chief guest on the occasion, said. Tomar added the interceptor boat will ensure maritime security of Gujarat’s 1,600-km coastline. Inspector General Rakesh Pal said the interceptor boat has state-of-the-art elements in terms of engine, navigation system or weaponry system and was “another feather in the cap of the state of Gujarat”.

“After getting an intelligence input, the boat can swiftly and immediately reach to the location. The alloy used in this ship is 2.5 times lighter, as a result of which the speed increases with short time and it can run deep into the sea. Its capacity is it can run 24 hours without outsider logistic support. At the time of need, we can use this boat to reach to the international boundary,” he said.


There are a total of 16 interceptor boats with the ICG in Gujarat. “It will also get two more ships in March and June next year and this will add more in terms of the security of our country. The sea in India is the prominent gateway to the world. The maritime trade and commerce had played an important role in the growth of Gujarat. Various new threats had emerged at the Indian coast, making coastal security a critical responsibility in addition to our mandated roles such as search and rescue, pollution response etc. Our capacity building in all spheres is essentially focused on making our seas safer and conducive activities in law enforcement and maritime commerce,” Commander Inspector General Pal said.

Mohammed Danish, the Assistant Commanding Officer of the newly commissioned vessel, said, “The boat has two riffles and single pistol, 12.7 mm heavy machine gun (Prahari) on board as main armament. It can run at the speed of 45 knots (or 85 kilometres per hour). This boat (over 27 metres long) is made for interdiction (chase and catch) and for search and rescue. The ship is equipped with two twin diesel engines, twin water jet propulsion and has the endurance of 500 nautical miles at 25 knots of speed.” 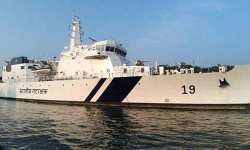 The Indian Coast Guard ship 'Sujeet', the second in the series of 105 metres off-shore patrol vessels, was commissioned in Goa on Tuesday.

The vessel will enhance the Indian Coast Guard's operational capability to discharge multifarious maritime tasks, a spokesman of the Coast Guard said.

It was commissioned at the Goa Shipyard Limited (GSL) in Vasco town by Secretary (defence production) Raj Kumar in the presence of Indian Coast Guard Director General Krishnaswamy Natarajan and others.


The 105 metres OPV (off-shore patrol vessel) has been designed and built indigenously by the GSL, and is fitted with advanced technology, navigation and communication equipment, sensors and machinery, the spokesman said.

It is designed to carry one twin engine helicopter and four high speed boats, including two inflatable boats, for boarding operations, search and rescue, law enforcement and maritime patrol, he said.

The ship, on joining the Coast Guard, will be based at Goa, he said.

"The ship will be deployed extensively for EEZ (exclusive economic zone) surveillance and other duties as enshrined in the Coast Guard charter," he said.

"Presently, the Indian Coast Guard has a fleet of 155 ships and 62 aircraft," he said, adding that 35 more ships are at various stages of construction at different Indian shipyards.

Besides, 16 advance light helicopters are under production at the HAL, Bengaluru, which will provide an added strength to the surveillance capabilities of the Indian Coast Guard to deal with the ever-dynamic maritime challenges, he added.

mk III ALH making its way into CG vessels too: 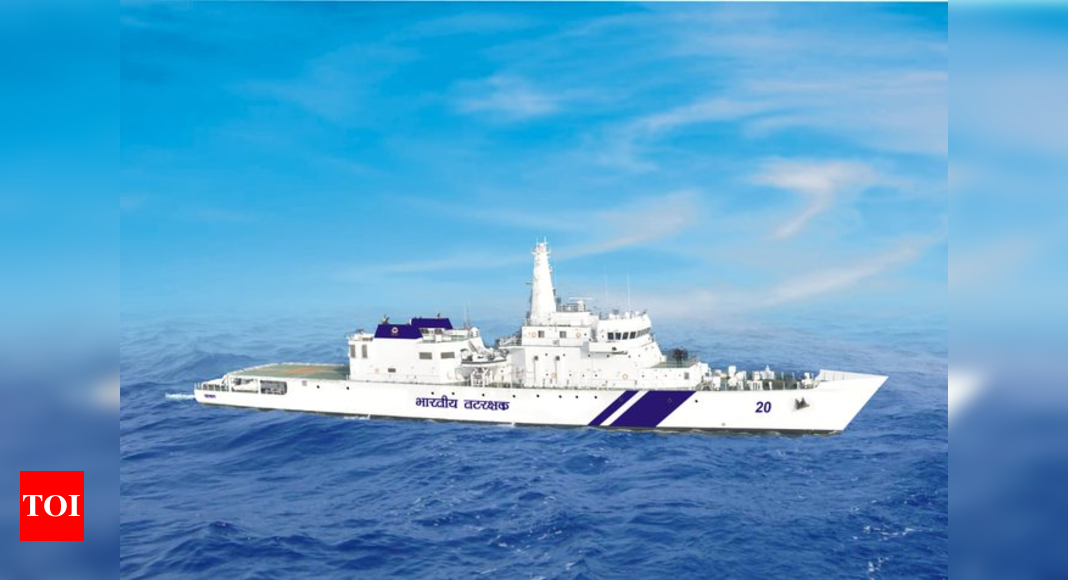