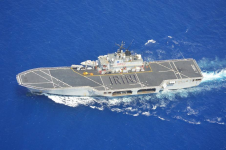 On April 1, 2021, the Italian Navy San Giorgio amphibious assault ship has replaced the Greek Ship Aegean as the new flagship for the operation EUNAVFOR MED IRINI. Operation IRINI (named after the Greek word for “peace”) was launched on 31 March 2020, following a decision by the Council of the European Union. IRINI’s mandate has been recently extended for two years, until March 2023.

The main task of the EUNAVFOR MED IRINI operation is the implementation of the arms embargo on Libya under the relevant UN Security Council resolutions. The Operation has also secondary tasks including monitoring illegal oil trafficking from Libya, contributing to countering human trafficking and smuggling activities (through air monitoring), and contributing to the training of the Libyan Coast Guard and Navy. This latter task at the moment is frozen pending an agreement with the new Libyan government.

Operation IRINI has just completed its first year of activity. Recently, the EU Council has extended the mandate for two years.

In one year of activity, Operation IRINI has investigated more than 2,400 ships and has monitored 200 suspect flights. The Operation has conducted 100 consensual visits onboard merchant vessels (called Friendly Approaches) and nine inspections. It has seized one illegal cargo, after the first ever EU diversion operation, preventing illegal export of fuel for military purposes.

The Operation monitors 16 Libyan ports and oil facilities,25 airports, and landing strips. Operation IRINI has shared more than 22 classified reports with the UN Panel of Experts on Libya covering violations or possible violations of the arms embargo related to both sides of the conflict in Libya.

The San Giorgio class is an amphibious assault ship and helicopter carrier in service with the Italian Navy. The ship is able can carry a battalion of troops and up to 36 armored vehicles. The stern floodable dock can accommodate three landing craft. Three San Giorgio Class amphibious transport dock ships are in service with the Italian Navy that were built by Italian shipyard Fincantieri.