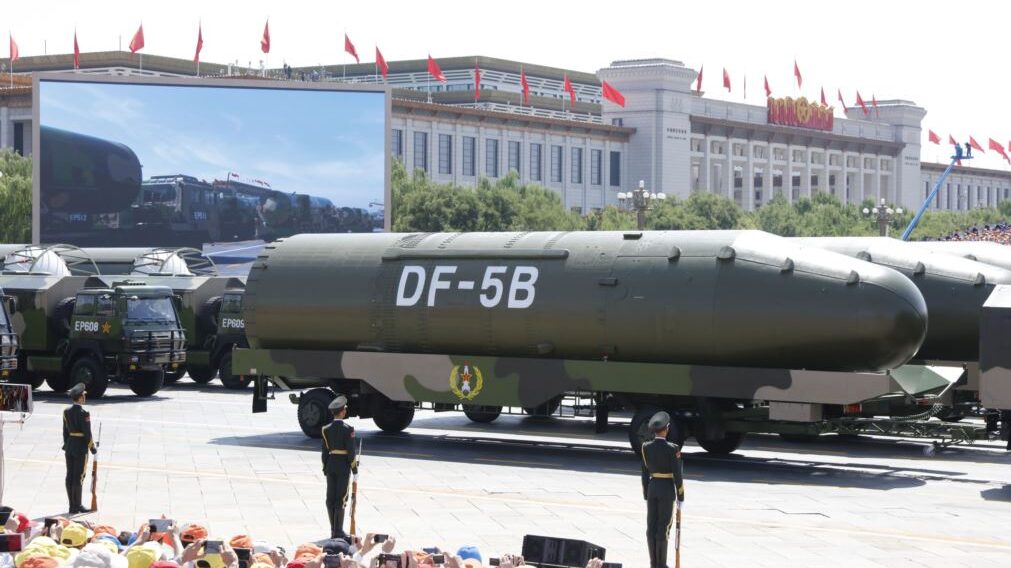 The Taiwan visit by US House Speaker Nancy Pelosi sparked what appeared to be the threat of the use of nuclear delivery systems to help China signal the seriousness of its reaction to the visit.

But what the signaling actually demonstrates, two experts say, is that China is highly unlikely to ever engage in first-use of nuclear weapons and its signaling is opaque, creating greater uncertainty about just what China wants observers to think.

Given that China strictly tracks and censors what can appear on the web, on its face this would seem to indicate that China was signaling at least that it possessed nuclear capable weapons. Add the timing, and it would seem reasonable to conclude that China was subtly threatening their use, or at least reminding observers of the fact that they could be used.

The SCMP said the videos also “showed other Dongfeng nuclear-capable missiles – including the road-mobile DF-27, DF-16 and DF-15B – moving through city streets. All Dongfeng-series missiles are capable of delivering nuclear warheads, while the DF-5B ICBM has a range of up to 15,000km (9,321 miles), enabling it to hit North America.”
Two China experts agreed that China appeared to be using nuclear weapons to signal the world about Pelosi’s visit to Taiwan, though exactly what message the People’s Republic was sending was uncertain.

“Back in 2005, LTG Xiong Guangkai, head of PLA 2nd Department (i.e., military intel) made famous comments about Taiwan and Los Angeles,” Dean Cheng, a top expert on the Chinese military at the Heritage Foundation in Washington, said in an email. “The common American interpretation (then) was that Xiong was threatening to nuke the US if it intervened over Taiwan. In fact, if you look at what Xiong said, it was that in the 1950s, the US could threaten China with nuclear escalation in the context of Taiwan (1956/1958 Taiwan straits crises), but now that China has nuclear weapons, the United States would have to tread more carefully.

“Similarly, China’s nuclear no-first-use policy has evolved to become more of a ‘no-first-use against non-nuclear states.’ Even then, as Chinese writings suggest, there are situations where China might still respond to a conventional attack with nuclear weapons (e.g., in the event of an attack on China’s nuclear power plants).”

The whole situation, Cheng said, is a reminder that China’s “views of nuclear use are often deliberately obfuscatory and cloudy,” and largely not understood by the US.

A second analyst, who commented only on background, said that China may well have concluded that Russia’s threats worked as deterrents and that China could do something similar to protect its interests regarding Taiwan.

“It seems one of the lessons learned for Beijing might well be that there is a need to beef up their nuclear capabilities as a means of deterring the US in a Taiwan contingency,” the analyst said in an email. But, “This is something the analyst community has to dig into a bit more to understand how effective of a deterrent it actually is,” the expert wrote.

Strategic Ambiguity As A Feature:​

Ambiguity marks China’s management of its nuclear forces and how it discusses them and uses them to deter, Cheng said. Unlike the US and Russia, he said “the Chinese believe ambiguity and doubt PROMOTE deterrence.”

To contrast the two approaches, here is how the US managed its most recent test of a Minuteman III nuclear delivery system.

In a regular press briefing on Sept. 6 at the Pentagon, the new Pentagon spokesman, Brig. Gen. Pat Ryder, said this:

“There will be an operational test launch of an Air Force Global Strike Command unarmed Minuteman III intercontinental ballistic missile early tomorrow morning, September 7, from Vandenberg Space Force Base in California. This launch is a routine test which was scheduled far in advance, and consistent with previous tests, this ICBM launch will validate and verify effectiveness and readiness of the system. In accordance with standard procedures, the United States has transmitted a prelaunch notification pursuant to the Hague Code of Conduct, and notified the Russian government in advance pursuant to treaty obligations.”

That follows a long tradition of the US making clear to Russia, China and the rest of the world that a test is going to occur. Notably, the Biden administration has previously announced that it delayed ICBM tests to avoid the risk of misunderstanding given current events — first delaying a test in March in the wake of Russia’s invasion of Ukraine, and then delaying again at the start of August as tensions soared around Pelosi’s visit.
“As China engages in destabilizing military exercises around Taiwan, the United States is demonstrating instead the behavior of a responsible nuclear power by reducing the risks of miscalculation and misperception,” National Security Council spokesman John Kirby said in August about the decision to delay the test. “We do not believe it is in our interest, Taiwan’s interest, the region’s interests, to allow tensions to escalate further, which is why a long planned Minuteman III ICBM test scheduled for this week has been rescheduled for the near future.”

On top of all that, China apparently intends to greatly expand the size of its nuclear forces, which have traditionally been kept quite small compared to the US and Russia.

The recent publicity surrounding the construction of more than 200 new Chinese nuclear missile silos has driven home the scale of China’s nuclear modernization — which clearly has been planned for some time, given how long it takes to build fields of silos — which will give China new capabilities in terms of both strike and deterrence.

In contrast to the opacity around how it handles its nuclear weapons, Beijing’s management of its conventional deterrence message during the Pelosi visit was much clearer, with repeated warnings from a raft of Chinese spokespeople and military experts that the US and other forces should act as Beijing wants regarding Taiwan.

But In terms of nuclear deterrence, Cheng says China has been drawing lessons from Russian President Vladimir Putin’s threats to use nuclear weapons to deter the West, and that is driving Beijing to signal about Taiwan — however vague those signals might be. And he noted that China, even before Ukraine, had decided to build many more nuclear silos as part of what is clearly a major nuclear modernization effort.

“For example, because Russia has nukes, the West (NATO) does not openly support Ukraine, beyond provision of weapons, BUT is prepared to wage long-term economic warfare. What does this imply for the PRC? Presumably that the West, led by the US, would counter a Chinese move on the South China Sea or Taiwan with sanctions, but might refrain from directly fighting against Chinese forces. HOWEVER, Biden’s repeated claims that the US WOULD intervene and defend Taiwan then leaves the Chinese confused. So, to keep the second aspect limited (and ideally not occur at all), they remind the West that China has nuclear weapons.