Fawad Alam’s fourth Test hundred and second on the trot helped Pakistan end day two of the first Test against Zimbabwe with a lead of close to 200 runs.

On Friday, Pakistan started the day’s play with 103 runs on the board and without the loss of any wickets. But opener Abid Ali gave away his wicket early in the day with only 12 runs added to the overnight score.

As soon as Pakistan reduced the deficit, Pakistan lost Azhar Ali and skipper Babar Azam followed the batsman to the dressing room by throwing his wicket. It was Azam's first duck in Test cricket.

Alam then came to the crease with Pakistan at 182/3 and it looked as if the men-in green would throw away the advantage they had taken a few balls ago.

However, Alam and Butt then paired up and brought the score to 224 before the opener edged the ball to the wicketkeeper. Butt fell just nine runs short of his maiden Test century.

Seeing the wickets tumble Alam made sure that he stayed at the crease and secured one end for Pakistan. He was helped by wicketkeeper Mohammad Rizwan and the two made a partnership of 107 runs and put Pakistan in a commanding position.

Rizwan was later dismissed for 45 after chopping the ball onto his stumps. Faheem Ashraf was the next man in but left without scoring any runs.

Despite the wickets falling at the other end, Alam continued with his batting and scored his fourth Test century with a four in the 115th over.

Some late hitting by Hasan Ali at the end of the day also helped Pakistan reach 374 with a loss of six wickets and a lead of 198 runs.

Alam will now be hoping that he can continue his stay at the crease, when he returns to the pitch on day 3, and help Pakistan develop a formidable lead against the chevrons.

On the other hand, the home team's bowlers toiled all day and their failure to pick up wickets helped Pakistan develop a good lead.

For the chevrons, Donald Tripano was the pick of the bowlers as he ended his day with 3 for 89 in 23 overs. He will now be hoping that when picks the bowl again tomorrow he takes the rest of the wickets quickly and also get his first five-for in Tests. 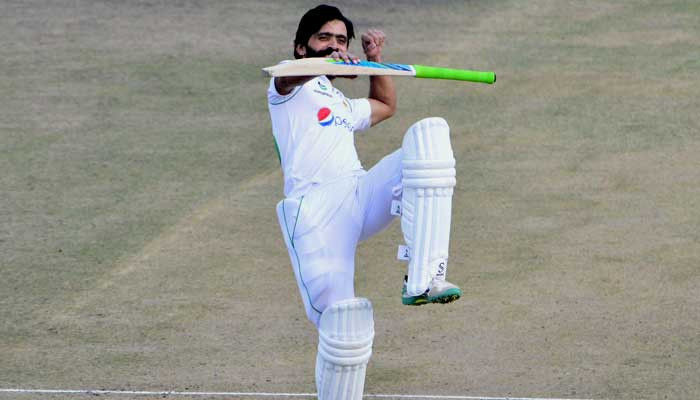