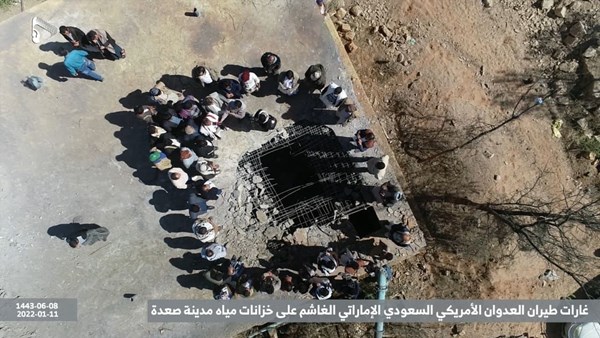 The Yemeni Ministry of Water and Environment calls on the United Nations and the international community to take action against the Saudi atrocities.

The Yemeni Ministry of Water and Environment calls on the United Nations and the international community to take action against the Saudi atrocities.

Today, Wednesday, the Yemeni Ministry of Water and Environment in Sanaa condemned the attack of the Saudi-led coalition warplanes that targeted the Tlummus field tanks in the city of Saada, which supplies the Governorate with potable water.
In a statement, the Ministry of Water considered that "the systematic targeting of water projects by the coalition of aggression in the city of Saada, northern Yemen, with three raids is a full-fledged crime that contradicts international and humanitarian norms, charters, and laws."


The statement indicated that "the warplanes of the coalition of aggression targeted two water tanks, with a capacity of 280 and 300 units respectively," resulting in their destruction, thus affecting the nearby water network. Moreover, "five nearby water wells were also affected directly, which led to cutting water off the residents of Saada,” the statement added.
The statement also confirmed that "135,000 people who benefit from the Tlummus reservoirs were directly affected by the cessation of water pumping," noting that "citizens were forced to buy water at high prices, due to the lack of oil derivatives."
The Ministry, in its statement, called on the United Nations and the international community to assume their responsibility and put pressure on the countries of the coalition of aggression to stop the targeting of infrastructure and the destruction of water projects.


In the past 24 hours, the Saudi-led coalition warplanes carried out 10 raids and hit the communications networks in Al-Abdin, south of the city of Saada, and Bani Mo’in in the Razeh border district in the western countryside of Saada.
The Saudi-led coalition warplanes also carried out 17 raids on the eastern Al-Balaq area in Wadi Ubaidah District, southeast of Marib City, and 10 raids on Harib District, east of the governorate.
You must log in or register to reply here.
Share:
Facebook Twitter Reddit Pinterest Tumblr WhatsApp Email Share Link