Taliban jab Pakistan over India defeat, with a throwback ‘surrender’ pic from 1971

https://twitter.com/i/web/status/1609755114327212037
Afghanistan's Taliban mocked Pakistan saying that Islamabad would face the same "shameful" fate if it launched a military attack on them while sharing a picture of the country's military surrender to Indian forces in 1971. Taliban leader Ahmad Yasir in a Twitter post asked Islamabad to avoid "disgrace" following Pakistan's interior minister Rana Sanaullah remark hinting at a possible military operation against the Tehreek-e-Taliban Pakistan (TTP) hideouts in Afghanistan.

“Interior Minister of Pakistan! Excellent Sir! Afghanistan, Syria and Pakistan are not Turkey to target the Kurds in Syria. This is Afghanistan, the graveyard of proud empires. Do not think of a military attack on us, otherwise, there will be a shameful repetition of the military agreement with India," Ahmad Yasir tweeted.

With the tweet, Ahmad Yasir shared a picture from December 16, 1971, where Pakistan army's lieutenant general Amir Abdullah Khan Niazi, the chief martial law administrator of East Pakistan (now Bangladesh), can be seen while signing the ‘Instrument of Surrender’ in Dhaka.

Earlier, Pakistan's interior minister Rana Sanaullah said that Islamabad has the legal authority to act against "insurgents’ hideouts" in Afghanistan if Islamabad is threatened by such groups.

"When these problems arise, we first ask Afghanistan, our Islamic brother nation, to eliminate these hideouts and handover these individuals to us, but if that doesn't happen, what you mentioned is possible," Rana Sanaullah had then said.

Taliban also said that they would not allow anyone to attack Afghanistan with its spokesperson Zabiullah Mujahid saying that Afghanistan wants to have good relations with Pakistan but its officials should use caution when they are making comments.

"No country has the right to attack another nation's territory. There is no legislation in the world that permits such a transgression. If anyone has any worries, they should share them with the Islamic Emirate since it has the sufficient forces and can take action,” Zabiullah Mujahid said. 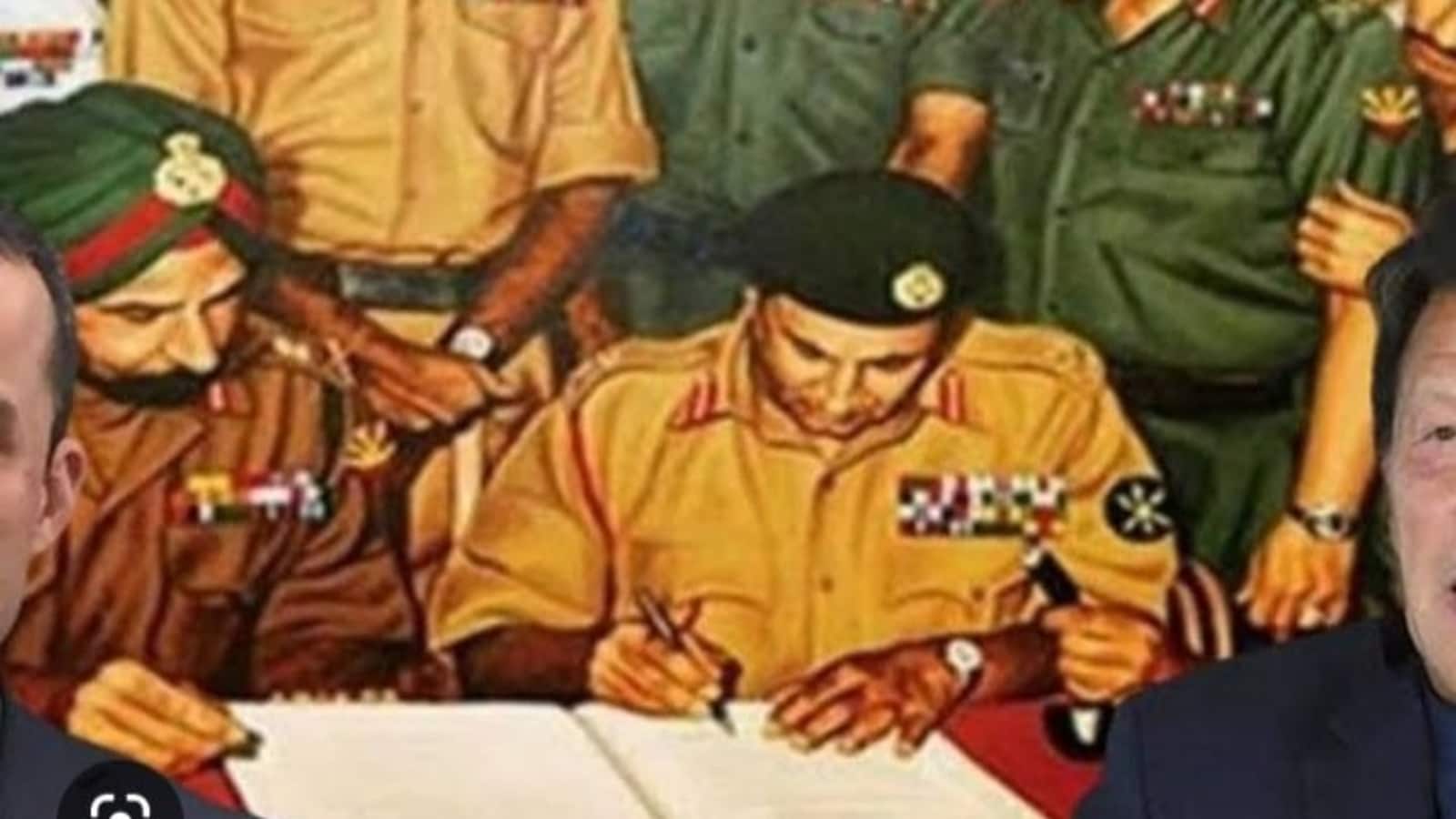 Taliban jab Pak over India defeat, with a throwback ‘surrender’ pic from 1971

Unbelievable what Pakistan has done to herself. My heart is aching.

Kedikesenfare said:
Unbelievable what Pakistan has done to herself. My heart is aching.
Click to expand...

Only way to bring social and economic development in Pakistan is to kick the military out of politics, and to start a long term massive countrywide modern education campaign.
Otherwise, the only nuclear armed Muslim country in the world will become officially a failed state pretty soon, maybe as soon as the next decade.

Afif said:
Only way to bring social and economic development in Pakistan is to kick the military out of politics, and to start a long term massive countrywide modern education campaign.
Otherwise, the only nuclear armed Muslim country in the world will become officially a failed state pretty soon, maybe as soon as the next decade.
Click to expand...

It is already a failed nation all thanks to Pakistan Army. They are such a curse bro I tell you

Pakistan's "prescription for disaster" against itself

a) Ignoring the ideas of the founding leader. When he died, Pakistani's first job was to destroy the secular foundations established by Jinnah. Whoever betrays his ancestor, he will be cursed.

c) To allow the establishment, organization and foreign financial support of mad-rasas that produce "bipedal drones" in the country.

d) Entering wars with India that they cannot win.

f) To radicalize Afghanistan through the mad-rasas in their countries.

What is happening now is that the Taliban, who harbor ethnic hatred but mask it using religion, are planning to spread their twisted ideology throughout Pakistan.

Yeah, but no. Taliban can't force a 1971 style capitulation on Pakistan. Conventionally I don't see Taliban as a match for Pakistan's. But maybe Talibs leaders wants you to believe the otherwise.

why are so called islamist jihadis shilling for communist pkk kurds who hate islam?
K

Agha Sher said:
well, Turkiye has a lot of problem too. Many more than Afghanistan right now. Why don’t we let Russia and USA take turns on Turkiye and obliterate it?

twisted and moronic logic you have.
Click to expand...

I feel you and understand your pain. I don't know a single Turk who harbours hatred for the Afghani people but the decisions lately taken by the Taliban are unforgivable. Even Islamists in the Middle East are shaking with their heads. The situation is out of control and the constant attacks on Pakistani border posts are unwarranted.
K

Momentum said:
Then why are there so many of you in Türkiye then?
If you think that Türkiye has the same problems as the failed Nation called Afghanistan, then there is no point in talking with you.
Click to expand...

He's just hurt and you would be too in his position. Having said that, I'd exchange Kılıçdaroğlu against 10 million Ağa Şers in a heartbeat. lol

NO INSULT TO ANY COUNTRY,NO MATTER THE SITUATION!

rif.ahm said:
t is already a failed nation all thanks to Pakistan Army. They are such a curse bro I tell you
Click to expand...