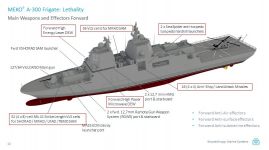 On September 29-30, a representative from Thyssenkrupp Marine Systems (TKMS) provided data on the MEKO A-300PL class frigates that the company is proposing to the Polish Navy as part of the Miecznik program at a conference hosted by the Polish defence media outlet Defence 24.

According to the information and infographics provided by the firm, MEKO A-300 class frigates will be strongly equipped and fully functional assets capable of fighting in three operating environments: the air, the surface, and the subsurface.

“The MEKO A-300 project was specifically developed to secure actions in high-risk air, surface, and subsurface conditions, such as those present on NATO’s eastern flank in the Baltic Sea region,”
Click to expand...

Survivability (resistance to adversary operations), detection reduction by all available technical observation systems (stealth technology), lethality (ability to hit specific targets), and adaptability to diverse missions were presented as the four key strengths of the MEKO A-300. 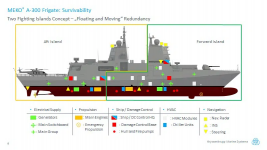 To improve firefighting and NBC protection, the ship is divided into two primary zones (front and aft islands, a feature already adopted in the F125 class frigate of the German Navy). Furthermore, the ship’s weaponry and sensors are split into two islands in order to keep the ship fighting while also coping with fire or damage.

The frigate’s missile, gun, and torpedo weapons are specifically zoned. Aside from the ECD antenna system, the sensors were further divided by placing two navigation radars on the front mast and one on the back mast, for example. The Combat Information Center (CIC) has also been doubled. The primary CIC is usually found in the forward section, while a backup (smaller) CIC has been located near the stern (behind the task deck under the hangar).

The ship will be constructed with stealth technologies to lower radar cross-section and thermal signature in comparison to similarly-sized frigates. 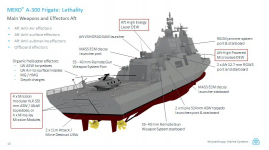 The MEKO A-300 frigates will be armed with two VLS systems, according to the infographics: a Mk 41 VLS 4×8 cells in the forward section loaded with SHORAD/MRAD/LRAD/TBMD missiles, and a 36-cell VLS between masts launching MRAD. Behind the forward VLS will be a SAM launcher (similar to RAM launchers) with a capacity of 16 short-range SAMs. The new frigates appear to be outfitted with a multi-layered air defence system that includes a range of SAMs. As a result, the MEKO A-300 frigate can engage sixteen air targets simultaneously with at least two missiles.

Four quad launchers will be mounted between two masts and will be used to launch anti-ship or land-attack missiles against surface and land targets. Two triple 324 mm torpedo launchers will be deployed on the starboard and port sides to engage subsurface targets.

The main gun will be a 127/64 mm Vulcano. Along with the RAM point defence missile system (PDMS), the ships will receive two High Energy Laser (HEL) systems (front and rear), which will most likely be used to counter low-slow flyers like drones. The ships will be armed with two 35/40 mm cannons and two 12.7 mm remote weapon systems. 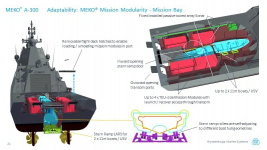 Mission Modules are one of the most significant components of the MEKO A-300 frigates. The stern slip on the module provides for the very quick release and retrieval of at least two flat-bottomed motorboats up to 11 m in length. This technology provides the use of boarding and inspection units, sea commandos, and other types of unmanned surface vessels.

These modules can also be outfitted with towed array sonar for anti-submarine warfare. 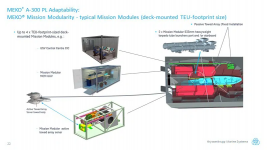 As part of the Miecznik (Swordfish) initiative, Poland has formed a consortium comprising of the Polish Armaments Group and the PGZ Naval Shipyard to purchase three frigate-sized coastal defence boats for the navy. According to the schedule, qualification testing on the single prototype frigate is planned to be completed by June 2028. The second frigate will be delivered to the Polish Navy in 2033, followed by the third ship in 2034. It was announced in early August that three shipbuilders, TKMS of Germany, Babcock of the UK and Navantia of Spain have been shortlisted by the Polish Government to prepare a concept design and feasibility study as part of Project MIECZNIK.

TKMS was previously proposing the MEKO A-300 design to Greece for the future frigate program of the Hellenic Navy. This bid however appears to have been unsuccessful following the announcement of an MOU between the Greek Government and French shipbuilder Naval Group for 3 FDI frigates. 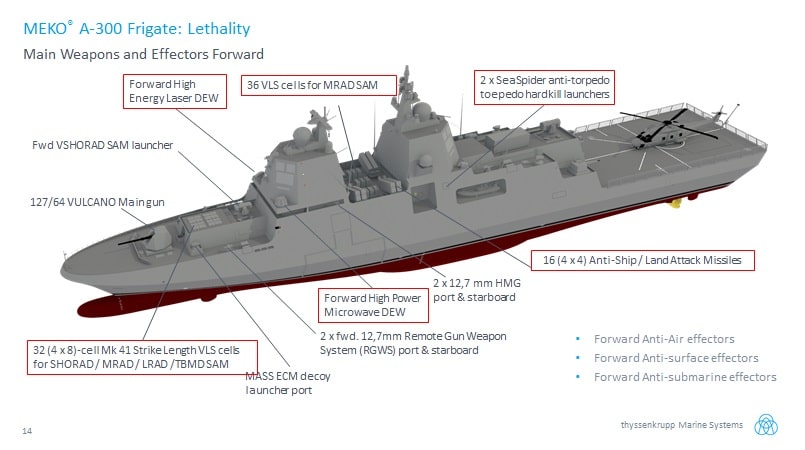