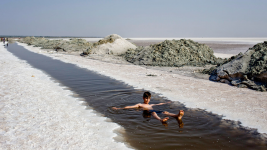 Twenty years ago, geochemist Arash Sharifi began to drill sediment cores in Iran’s Lake Urmia—then the largest lake in the Middle East—to probe its recent climate history. “I was shocked at how little was known about the lake,” recalls Sharifi, now at Beta Analytic Inc. in Miami. He became entranced by the “very unique chemistry” of its hypersaline waters. He also grew alarmed: Dams on feeder rivers and a proliferation of illegal wells had made the lake, a favorite haunt of flamingos and migratory birds, “vulnerable to hydrological collapse,” he wrote in an internal government report.

That dark vision came to pass: By 2013, Lake Urmia’s surface area, once 6100 square kilometers, or about the size of Delaware, had shrunk by 90%, a plight reminiscent of that of the larger Aral Sea in Central Asia. To save the dying lake, Iranian President Hassan Rouhani launched a restoration initiative that has so far cost $1 billion. Now, Lake Urmia has a stronger pulse: Water levels have risen, and last summer flamingos were spotted in large numbers for the first time in years.

But the rebound could be fleeting. The higher water appears to be almost entirely the result of a few years of unusually strong rains, a recent study concludes, but that pattern is already giving way to drier conditions. And Iran’s June presidential election is expected to usher in a leader less committed to the lake’s restoration than Rouhani, who can’t run for reelection under the nation’s constitution. “We’re at a tipping point,” says Somayeh Sima, a water resources specialist at Tarbiat Modares University in Tehran, Iran. Even pausing restoration work for a year or two, she says, “would be dangerous for the lake.”

The shallow lake was at its most expansive in recent decades in the late 1990s, when it stretched nearly 140 kilometers long and 50 kilometers wide, and its volume exceeded 30 billion cubic meters. But a 5-year dry spell that began in 1998 was coupled with increasing water diversion for irrigation. “We call it anthropogenic drought,” says Amir AghaKouchak, a hydrologist at the University of California (UC), Irvine, who first visited Urmia as a student in 1998. By 2013, Urmia’s volume had fallen by a factor of 60, to 500 million cubic meters, exposing salt flats that fueled salt-ridden dust storms.

Under Rouhani’s government, which took office in 2013, providing water for drinking, irrigation, and industrial uses has remained paramount. But in 2018 the Cabinet mandated that managers start to allocate some water to wetlands. The government also launched the Urmia Lake Restoration Program (ULRP), which has endeavored, with mixed success, to wean nearby farmers off thirstier crops like sugar beets and adopt more efficient irrigation practices. ULRP managers have also played whack-a-mole with illegal wells, pouring concrete into some as others pop up. 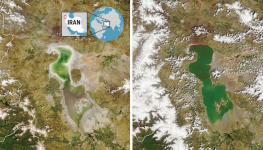 Lake Urmia had shrunk calamitously by 2014 (left), then roared back in 2019—but its health is still precarious.
(PHOTOS) LAUREN DAUPHIN/NASA; (MAP) K. FRANKLIN/SCIENCE

More controversially, ULRP has emphasized big engineering works, including a dam, tunnel, and canals that divert as much as 600 million cubic meters of water a year from the Little Zab River to Urmia’s south arm. (Like Utah’s Great Salt Lake, Urmia is bisected by a causeway.) Together with treated wastewater funneled into the lake, the inputs may have helped inundate lakebed that had dried out several years ago, maintaining the isolation of two islands that are home to the rare Persian fallow deer and Armenian sheep. (At the lake’s nadir, predators could walk across dry lakebed from the mainland to the islands.) However, part of the Little Zab watershed is in Iraq, in territory controlled by Kurdish communities with their own water needs.

As upstream communities tap the water, AghaKouchak believes, the flow into the lake is “bound to suffer in the future.”
In the past few years, such worries receded as ample precipitation helped boost lake levels by about 1.5 meters. “Nature has been kind,” says Soroosh Sorooshian, a water expert at UC Irvine. The rains benefited water bodies across the broader region, including Lake Van in Turkey and a pair of reservoirs in Iraq, a team led by Behzad Ataie-Ashtiani, a civil engineer at Sharif University of Technology, reported this month in the Journal of Great Lakes Research. But historically, droughts have followed rainy periods in the region, and this year has so far been much drier. Those vagaries make it hard to judge whether the restoration program is succeeding.

It’s also not clear that ULRP can undo damage already done by the lake’s shrinkage. The project aims to raise Urmia’s levels by an additional 3 meters, which planners say would reduce the lake’s salinity from its present supersaturated state—about 350 grams of salt per liter of water—to between 240 and 285 grams per liter. At that level, brine shrimp—now present in vanishingly low numbers in the lake—could return at great enough densities, ULRP managers hope, to nourish flamingos and other wildlife. (The recent flamingo sightings suggest the birds can subsist on other critters as well.)

But some experts doubt the target lake level will be sufficient to dilute meters-thick salt deposits, accumulated when now-submerged swaths of lakebed dried out several years ago. Still, Sima notes, any increase in lake levels is likely to benefit ecosystems and people.

Such technical debates could become moot depending on the outcome of the June election. With Iran’s economy crippled by Western sanctions, the country’s next president, widely expected to be a hardliner, will be hard pressed to steer scant resources to environmental protection. “Nobody wants to see the lake die,” Ataie-Ashtiani says. “But the situation is very fragile.”