The same research team previously applied their design strategy to develop a patented tunable filter to replace the much larger YIG-tuned filters. 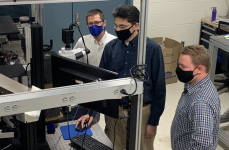 WRIGHT-PATTERSON AFB, Ohio – The continuing quest to reduce size, weight, and power (SWaP) in electronic systems often is a challenge when it comes to certain passive components RF and microwave components such as attenuators and filters, which typically are constructed from materials that do not lend themselves to miniaturization. Jack Brown at Microwaves & RF reports.


19 April 2021 -- Researchers at the U.S. Air Force Research Laboratory (AFRL) at Wright-Patterson Air Force Base have discovered how to produce an often-used high-frequency passive component -- the RF isolator -- in a size akin to that of semiconductor devices. RF isolators are vital for minimizing unwanted signal reflections in systems operating at microwave and millimeter-wave frequencies.


Researchers developed an RF and microwave isolator about one-sixth the size of miniature RF isolators based on currently available magnetic materials, such as yttrium-indium-garnet (YIG), which also consume relatively high amounts of power.

The researchers used a layer of piezoelectric material with a thin film of permanently magnetized material to achieve high isolation from chip-sized passive components. The AFRL team is pursuing the research with Sandia National Laboratories in quest of a circulator based on the same material.