In Singapore, the word kiasu is ubiquitous. In the Hokkien dialect, the traditional lingua franca of many ethnic Chinese in Southeast Asia, it means “afraid to lose” and describes the fear of missing opportunities. In the realm of foreign policy, Singapore is the paragon of kiasu-ness: As a highly networked trading hub connecting East and West, the island strives to keep opportunities open in all directions. To that end, it seeks to balance its relations and avoid having to take sides between China and the United States.
In recent years, however, China has been subjecting Singapore to greater pressure. It is pushing the island to make a choice between the two great powers and is working hard to influence Singaporeans to take a more accommodating position toward Beijing.

The basis for such Chinese pressure is evident in a June Pew Research Center report detailing global views of China and the United States. The survey of 17 advanced economies found that a median of only 27 percent of respondents has a favorable view of China. Singaporeans, however, bucked the trend: About 64 percent had a favorable view of China, the highest among all countries surveyed. That compares to only 10 percent of Japanese, 21 percent of Australians, and 22 percent of South Koreans.
Similarly, 49 percent of Singaporeans value close economic ties to China (against 33 percent who say that about the United States). Across the 17 economies, on average only 21 percent of respondents valued economic ties with China, versus 64 percent who valued such ties with the United States.

Singaporeans’ perceptions of Chinese President Xi Jinping also cut against the grain: 70 percent expressed confidence in the Chinese leader. On average across the 17 economies, a whopping 77 percent said they had no confidence in Xi. Largely reflective of my personal experience, Pew also noted that older Singaporeans have more positive views of China and prefer closer economic ties than their younger compatriots. Unsurprisingly, Chinese Singaporeans—who make up about three-quarters of the island’s population—have a more favorable view of China than their ethnic Malay and Indian compatriots.

The gaps in Singapore’s diverse and multicultural society cut across other lines as well. On China, there appears to be a difference in perception between the general population polled by Pew and the country’s thought leaders and policymakers. In the 2021 State of Southeast Asia Survey, the ISEAS-Yusof Ishak Institute in Singapore polled respondents from the 10 countries of the Association of Southeast Asian Nations (ASEAN), with a focus on scholars, businesspeople, government officials, and journalists. Among this elite group, perceptions of China were significantly more critical. Fifty-seven percent of Singaporean respondents said they had little or no confidence that China will “do the right thing” to contribute to global peace, security, and prosperity. (The corresponding figure across all ASEAN countries was even more critical of China, however, at 63 percent.)

Americans who see Singapore as a friend of the United States might find the Pew report disappointing. Apart from Greece, Singapore was the only country in the survey where views of China among the general population were more favorable than views of the United States. That’s despite traditionally very strong relations. According to a senior U.S. official, Singapore is a nonallied partner that, for all intents and purposes, acts like an ally. Not only is the United States the largest source of foreign investment in Singapore, but the 2004 Singaporean-U.S. free trade agreement was also the first bilateral trade pact that Washington signed with any Asian country. The web of interactions between the Singaporean and U.S. militaries is so dense that Tim Huxley, the author of Defending the Lion City: The Armed Forces of Singapore, once wisecracked that while the relationship is not a formal “marriage” between allies, it is a situation of “friends with benefits.”

Increasing tensions between Beijing and Washington, however, mean that the island is effectively torn between two lovers. As Bilahari Kausikan, a retired Singaporean diplomat, put it: There is no “sweet spot” to keep both the Chinese and Americans “happy.”

That hasn’t kept the Singaporean government from trying. For each move toward the United States, it has made a similar move toward China. Take the 2019 extension of a 1990 Singaporean-U.S. memorandum of understanding that facilitates U.S. military access to the island’s air and naval bases and provides logistics support to U.S. personnel, aircraft, and naval vessels. Less than a month after the memorandum was extended, Singapore and China updated their defense agreement, which includes provisions for joint military training, a regular ministerial dialogue, a visiting forces agreement, and a bilateral hotline.

Singapore’s model of equal-opportunity relations is prevalent in Southeast Asia, if not the wider Indo-Pacific. No ASEAN member state wants to have to choose between China and the United States. But that balance is getting increasingly difficult to achieve. As one U.S. Navy admiral told me, Singapore is walking down an increasingly precarious tightrope between the two great powers.

Both superpowers are trying to pull in their own direction. Washington’s “Free and Open Indo-Pacific” strategy—with its principles of freedom of navigation, respect for international law, and maritime security—would theoretically be welcomed by a trading power like Singapore. But it is an open secret that this strategy targets China.

In 2003, Singapore reportedly turned down a U.S. offer to become a major non-NATO ally. And so, while Washington would want Singapore to publicly support the “Free and Open Indo-Pacific” (and the Quadrilateral Security Dialogue, known as the Quad, that includes Australia, India, Japan, and the United States), this is unlikely to happen. From the point of view of most ASEAN countries, publicly supporting the U.S.-led Indo-Pacific strategy and joining the Quad would be tantamount to waving a red flag at the Chinese bull.

China is pressuring Singapore on multiple fronts as well. In 2016, nine Singapore Armed Forces infantry carrier vehicles were detained in Hong Kong after they had participated in military exercises in Taiwan. Also that year, a Chinese major general said Beijing should take retaliatory action against Singapore for internationalizing the disputes in the South China Sea. The major general said Singapore had played a key role in putting the maritime dispute between China and its neighbors at the top of the agenda at the 2015 Shangri-La Dialogue in Singapore. According to the Global Times, Singapore had also attempted to put forward a South China Sea-related item at the 2016 Non-Aligned Movement summit in Venezuela. (This was disputed by Singapore.)

In July 2018, Kausikan, the retired diplomat, was reprimanded by China’s ambassador to Singapore for giving “an unfavourable impression of China on others.” Shortly before, Kausikan had warned in a speech that Chinese influence operations were targeting Singaporeans in order to sway them toward China’s positions. Kausikan said that China uses tactics ranging from public diplomacy to illegal covert operations to sway decision-makers. He also warned that Beijing is trying to force “false choices” between China and the United States on Singapore. Kausikan accused China of trying “to impose a Chinese identity on Singapore” and called for resistance against Beijing’s operations on the island.

In 2017, Singapore expelled Huang Jing, a Chinese American academic, on suspicion of working for a foreign power. (The Singaporean authorities did not explicitly name the power, but it is widely assumed to have been China.) This June, a Singaporean man, Dickson Yeo, was detained for two years under the Internal Security Act for being a threat to Singapore after first having been arrested in December. The Internal Security Department said that Yeo had acted as paid agent of a foreign state. Yeo had already served a 14-month jail term in the United States, where he was convicted of spying for China. Yeo, who was pursuing a doctorate at the Lee Kuan Yew School of Public Policy in Singapore, was supervised by Huang.

One of Singapore’s biggest challenges going forward is a fundamental misunderstanding in Beijing of what it means to be Singaporean. As Chinese power becomes more ascendant in Asia, mainland Chinese would expect Singaporeans—in particular, members of the Chinese Singaporean majority—not only to be drawn to them but also to think like them. In my discussions with mainland Chinese scholars, I have often run into the expectation that my “Chineseness” should equate to an affinity to Beijing’s way of seeing the world.

This is pure hokum. Lee Kuan Yew, Singapore’s founding father, said that mainland Chinese and their Singaporean cousins may share the same ethnicity and language. But he wrote that it’s impossible for Chinese Singaporeans to “really feel part of them.” The mental software is too different. “Your major premises are in your mind,” Lee wisely observed. Such nuanced arguments are usually given short shrift by mainland Chinese. And neither Beijing nor Washington is likely to let up the pressure. China could soon ask for more formal access to Singaporean facilities by Chinese warships. In a Taiwan Strait crisis, Washington might ask Singapore to provide port access and supplies to U.S. warships heading toward Taiwan from the Persian Gulf. This will present Singapore with a China-sized dilemma.

As a Western diplomat told me recently, Singapore’s situation is getting tougher. With pressure coming from both directions, it will become increasingly tricky to avoid choosing sides.

William Choong is a senior fellow at the ISEAS-Yusof Ishak Institute and the managing editor of Fulcrum, the institute’s commentary website focused on greater Southeast Asia. Twitter: @willschoong 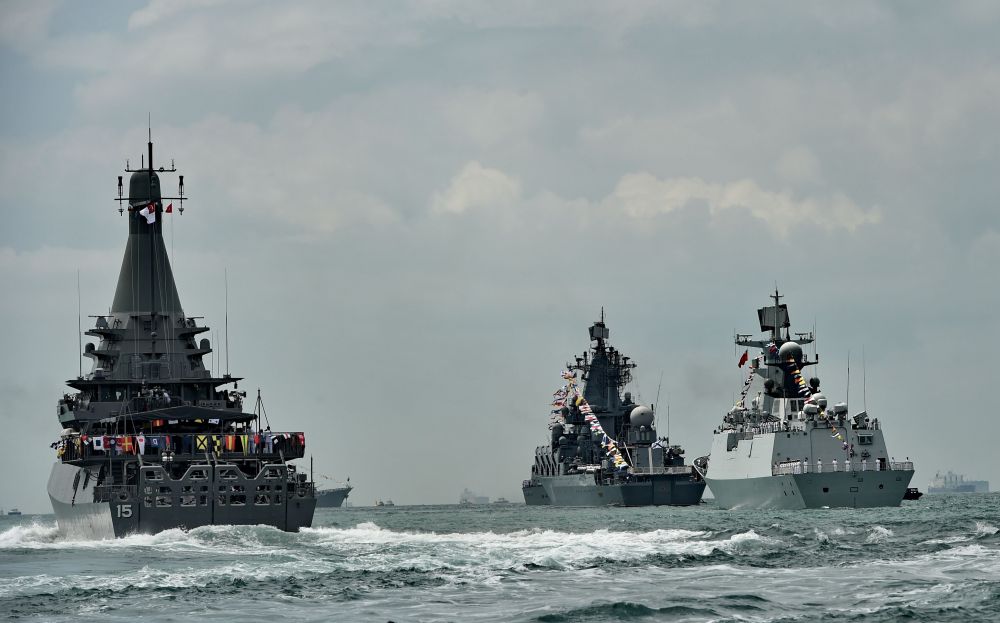 There is no sweet spot to keep both Beijing and Washington happy, but that hasn’t kept Singapore from trying.

-Singapore has already ruled out Huawei.