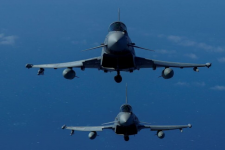 MILAN (Reuters) - Tempest and Future Combat Air System (FCAS), two European programmes designed to build new fighter jets, will eventually merge, Italy's Air Force Chief of Staff said on Tuesday.
At a time when European Union members weigh closer cooperation on defence without weakening the ties that some countries have with NATO, General Luca Goretti said that Rome could act as a bridge between NATO and Europe.

Italy joined the Tempest programme because it felt it could play a bigger role than in the FCAS programme, he added.
Goretti said that with the two programmes currently in their "conceptual phase" it was normal that, in this initial period, each country assessed options on technology.
"But it is natural that these two realities will merge into one, because investing huge financial resources in two equivalent programmes is unthinkable," Goretti told members of parliamentary defence committees.

Before they use full capability F35 it will be decomissioned .