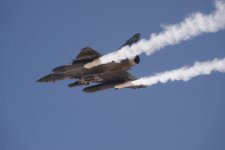 A French Air Force Mirage 2000D fighter jet has crashed in northern Mali on Tuesday due to a technical problem.

The Dassault Mirage 2000D, belonging to the 3rd Fighter Wing of the French Air Force, had taken off from the projected airbase (BAP) of Niamey, in Niger. The crash occurred in Hombori region.

According to armed forces spokesman Colonel Pascal Ianni, the two pilots involved were safe. One of them was reportedly injured and transported to Gao military base.


“Terrorist groups are not the cause of the problem”, Ianni said.

An investigation will be initiated to clarify the cause of this incident.