Navy Here Is Our First Look At The USMC’s NMESIS: NSM Being Launched From An Unmanned JLTV 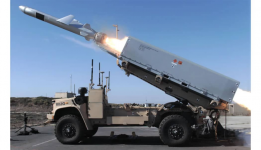 The inaugural test proved the system’s ability to fire a Naval Strike Missile, or NSM, from a U.S. Marine Corps ground launcher and score a direct hit against a surface target at sea.

NSM is a multi-mission cruise missile designed to destroy heavily defended maritime and land targets; it is the U.S. Navy’s over-the-horizon weapon system for littoral combat ships and future frigate

“Our Naval Strike Missile is a vital weapon for denying enemies the use of key maritime terrain. This test further demonstrates our partnership for advancing the Marine Corps’ modernization priorities of enabling sea control and denial operations.”

The Marines will use NMESIS to support the U.S. Navy from the shore against enemy ships. NMESIS is comprised of the Raytheon Missiles & Defense-made NSM and a Remotely Operated Ground Unit for Expeditionary (ROGUE) Fires vehicle, produced by Oshkosh Defense.

NSM is the latest product from a partnership Raytheon Missiles & Defense has with Norway and its defense leader Kongsberg Defence & Aerospace. The companies have teamed to bring more than half of NSM production to the U.S. The missile is already in service with Norway’s navy and Poland’s coastal defense squadrons.
-End-

Naval News comments:
The test mentioned by Raytheon today is likely the same “November 2020 live fire event “ which we first mentioned back in February. A USMC PAO told Naval News at the time that “it was successful in validating certain technologies and capabilities. The only other comment I would add is that the Marine Corps is investing in technologies to ensure we maintain our competitive edge. Ground Based Anti-ship Missile redefines the battlespace for our adversaries and ensures that we maintain our competitive edge.”“

As we reported previously, the USMC selection of Naval Strike Missiles from Raytheon was first announced in May 2019. The image released today confirms that the USMC uses an unmanned variant of the Joint Light Tactical Vehicle (JLTV) known as “ROGUE Fires”, as the NSM launch platform. The same vehicles is used for rockets: 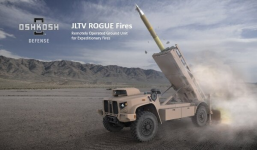 Oshkosh defense image showing an unmanned JLTV firing a rocket. The same platform will likely be used by the USMC to launch NSM anti-ship missiles. The launcher capacity appears to be 2x NSM per vehicle. This solution is set to enhance the USMC’s anti-ship capability in support of sea control and sea denial missions.

With the NMESIS and ROGUE Fires, the US Marine Corps is looking at stepping up its Anti-Access / Area Denial (A2/AD) solutions, fielding a number of unmanned launchers which can be easily forward deployed on islands, with the Indo-Pacific zone in minde. The NMESIS (land based) coastal defense batteries, with the Naval Strike Missiles, will add more punch to the US Navy’s anti-ship capabilities.

Here is our first look at the USMC's NMESIS: NSM being launched from an unmanned JLTV - Naval News