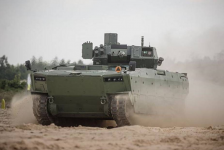 At the training ground in Nowa Dęba, Huta Stalowa Wola unveiled a prototype of the Borsuk (Badger) infantry fighting vehicle, Michał Zieliński reports in Polska Zbrojna. The Borsuk IFV was presented as part of the "Dragon '21" exercise, the first maneuvers of the Polish Arm in 2021y. The Borsuk is being developed as part of the "New floating infantry fighting vehicle" project carried out by a consortium led by Huta Stalowa Wola.

In 2014, the project was co-financed by the National Center for Research and Development. As announced, the serial production of Borsuk is to start at the turn of 2023 and 2024. ‘’We are currently talking about the details’’, emphasized Rajmund T. Andrzejczak, Chief of the General Staff of the Polish Army. He noted that the army absolutely needed a new amphibious infantry fighting vehicle. On the water, the Borsuk is propelled by water jets mounted at the rear of the chassis. The Borsuk can carry a total of 6 military personnel including driver and commander. The vehicle has great ballistic protection and firepower. 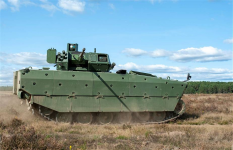 The Borsuk infantry fighting vehicle project has been under development since 2014. On October 25, 2020, Army Recognition reported that the Polish defense industry had conducted field and firing tests in September 2020 with the new Polish-made Borsuk fitted with a 30mm cannon turret. The Borsuk is a new generation of tracked IFV (Infantry Fighting Vehicle) fully developed and designed by the Polish company Huta Stalowa Wola SA (HSW). It was unveiled in September 2017 during MSPO International Defense Exhibition in Poland.

The preliminary tests are currently underway, including swimming and shooting tests. ‘’This will last until the end of 2021, while the entire next year we will conduct qualification tests. The next stage will be contract negotiations and the first implementation, which can be expected already in 2024’’, said Bartłomiej Zając, president of Huta Stalowa Wola. The Borsuk is being developed as part of the "New floating infantry fighting vehicle" project co-financed by the National Center for Research and Development. As announced, the serial production of Borsuk is expected to start at the turn of 2023 and 2024.

One of the most interesting design solutions of Borsuk is the ZSSW-30 turret (30 mm remotely controlled turret system). This Polish-made unmanned turret is fully controlled and aimed by a gunner from inside the hull. It is armed with a 30mm Bushmaster automatic cannon and a 7.62mm coaxial machine gun mounted to the right side of the main armament. There are four smoke grenade dischargers located on the right side at the front of the turret. The second armament of the vehicle includes two launchers for the Israeli-made Rafael Spike anti-tank guided missile mounted to the right side of the turret. The turret can be traversed through a full 360º with elevation from -9° to +60°. The cannon has a rate of fire of 200 rounds per minute.

‘’This turret is identical to what has been verified and checked in the qualifying tests. We are sure of the quality of this solution’’, emphasized Bartłomiej Zając. The ZSSW-30 turret is equipped with two independent sights enabling work in the hunter-killer and killer-killer missions: ‘’With one device, the gunner destroys the target, with the other, the commander watches the area around the wagon. If he notices a new target, he points it to the gunner using the hunter-killer mode and the turret automatically positions itself in that direction’’, explains Marcin Milikowski from the HSW design department. Killer-killer mode is activated in situations where the commander does not have time to provide information about the target. ‘’Then he quickly takes command and shoots. It takes literally only fractions of a second’’, explains Marcin Milikowski.

At the training ground in Nowa Dęba, Huta Stalowa Wola unveiled a prototype of the Borsuk (Badger) infantry fighting vehicle, Michał Zieliński reports in Polska Zbrojna. The Borsuk IFV was presented as part of the "Dragon '21" exercise, the first maneuvers of the Polish Army. 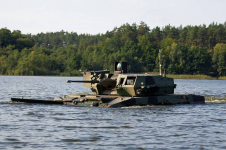