Mohamed Al-Menfi, head of Libya’s Presidency Council, affirmed to President Abdel-Fattah El-Sisi his keenness to intensify coordination with Egypt to hold Libyan elections on time and ensure a better future for citizens. 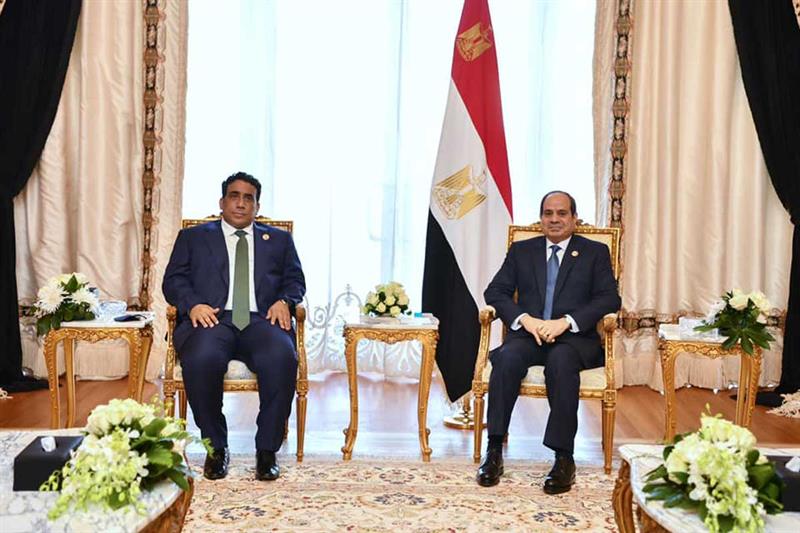 Al-Menfi met El-Sisi on Tuesday on the sidelines of the 21st Summit of the Common Market for Eastern and Southern Africa’s (COMESA) Heads of State and Government, which kicked off on Tuesday at Egypt’s New Administrative Capital (NAC).

The international community has highlighted the need for holding the long-awaited parliamentary and presidential elections in Libya as scheduled on 24 December.

As many as 98 hopefuls have applied to run for the Libyan presidency, Libya’s High Electoral Commission announced on Tuesday, a day after a deadline for receiving applications.

During the meeting, El-Sisi reiterated Egypt’s full support to the political path to settle the Libyan crisis and voiced keenness to intensify coordination with the Libyan side in this regard during the coming period, Presidential Spokesman Bassam Rady said in a statement.

Egypt’s main goal is to achieve peace and security for the Libyan brothers and to activate the free will of the Libyan people, El-Sisi said.

The Libyan state’s higher interest comes first, El-Sisi affirmed, noting that this interest stems from the principles of protecting the unity of the Libyan territories, restoring security and stability, and ending foreign interference.

El-Sisi hailed Al-Menfi’s participation in the Paris conference on Libya.

Al-Menfi’s participation has conveyed positive messages regarding the Libyan Presidency Council’s support to the democratic process and commitment to implement the national roadmap despite relevant local challenges, the statement read.

Al-Menfi stressed Libya’s appreciation of Egypt’s vital role at the official and popular levels to restore security and stability in Libya.

El-Sisi as well as other regional and world leaders took part in the Paris conference organised by the United Nations earlier this month to underscore the need for holding the vote on time.

Holding the elections in Libya will enable the Libyan people "to express their free will" and derail the efforts of those "seeking narrow goals," El-Sisi said during a speech in the conference.

He urged all actors inside and outside Libya to "rise to the occasion" and "act responsibly and rationally” in a way that helps Libya get through its crisis and end its people’s suffering.

Two weeks before the conference, Cairo had hosted a new round of UN-sponsored talks of Libya’s 5+5 Joint Military Committee (JMC), with the attendance of then-UN special envoy for Libya Ján Kubiš.

The commission agreed with representatives of Libya's neighbouring countries to coordinate on the exit of foreign troops from Libya.