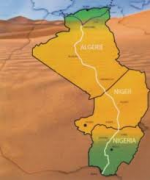 The CEO of the Algerian public oil group, Sonatrach, Toufik Hakkar, indicated, Monday in Algiers, that the feasibility study of the trans-Saharan gas pipeline project (TSGP), connecting Nigeria to Europe through Algeria and Niger , is completed and submitted to companies from the two African countries.

Speaking at the National Radio Channel I Forum, Mr. Hakkar specified that this feasibility is linked, in particular to the demand on gas and especially to the market study in view of the fall in the price of gas, emphasizing that the price of the latter has dropped from $ 10 per caloric 10 years ago to less than a dollar in 2020.

This could, according to him, "influence the decision-making to launch such an investment", hence the process of launching a market study to determine the demand for gas before deciding on the advisability of committing in this project.

According to the CEO of Sonatrach, who carried out the feasibility study, the technical study of the project is "tied up and the route of the gas pipeline defined".

The Minister of Energy and Mines, Mohamed Arkab, had recently indicated that Algeria attached "particular interest" to the "rapid" realization of the TSGP project aimed at connecting Nigerian natural gas fields to Europe via the Algerian gas pipeline network.
"We pay particular attention to the rapid realization of this important project which will give new impetus to the relations between our two countries, in terms of technical cooperation and capacity building", underlined Mr. Arkab.

The project will induce, according to him, significant socio-economic benefits in the transit countries, while respecting the protection of the environment and sustainable development. To this end, the Minister reiterated the Algerian side's wish to see Nigeria ratify the intergovernmental agreement relating to the TSGP project signed in 2009 in Abuja. The project is part of the program of the New Partnership for Africa's Development (NEPAD). APS
You must log in or register to reply here.
Share:
Facebook Twitter Reddit Pinterest Tumblr WhatsApp Email Share Link