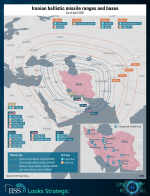 Iran’s ballistic missile systems, supplemented by cruise missiles and UAVs, are intended not only for deterrence, but for battle, including by Iran’s regional partners. In a new report, the IISS provides a detailed assessment of Iran’s missiles, and the manner and purposes for which it has been proliferating them.
Nuclear issues are the exclusive focus of the negotiations on the restoration of the 2015 Joint Comprehensive Plan of Action, which have taken place in Vienna. The Western powers are keen, however, to engage in follow-on talks to address Iran’s missiles and activities in the region. To inform the public policy debate on the latter matters, the IISS has produced a fact-rich technical assessment of Iran’s current missile and uninhabited aerial vehicle (UAV) capabilities and its proliferation of these technologies to Iran’s regional partners.

Drawing exclusively from open sources, including Persian-language material, the IISS report details Iran’s roughly 20 different ballistic missiles (the exact number depends on how variants are counted), as well as cruise missiles and UAVs. For now, all of Iran’s ballistic missiles apparently adhere to a self-imposed range limit of 2,000 kilometres. Iran’s priority is to improve precision, notable in several missile systems:
Iran’s long-term missile-development priorities will focus on missiles powered by solid propellants, which overcome the operational and performance limitations of its liquid-propellant systems. For the foreseeable future, Iran is also likely to continue to give priority to improving precision over extending the range of its missile forces beyond 2,000km. This emphasis on precision combined with the move towards solid propellants comes together most clearly in the Fateh family of short-range ballistic missiles. The remarkable rolling out of three new Fateh variants – Zolfaghar, Dezful, and Haj Qasem – in just the past four years is indicative of a significant developmental emphasis.
Iran’s space programme is not a mere cover for development of intercontinental ballistic missiles, notwithstanding mutually applicable technologies and capabilities. Solid-fuel space-launch vehicles of the type that have been recently introduced have more carry-over potential, however, than the liquid-fuel launchers that Iran earlier relied upon. For example, an Iranian spokesman claimed that the Zoljanah, revealed on 1 February 2021, was capable of being launched from mobile launchers, indicating the potential dual-use nature of the system.

The report also tracks the evolution of Iran’s missile doctrine, which over the past decade has changed from relying solely on punishing would-be attackers by striking cities and other high-value targets, to also prioritising improved precision to be able to deny potential foes their military objectives.
Iran is expanding its capacity to strike across the region through the continuing development and introduction of armed UAVs and cruise missiles. For example, in September 2019, the 700km-range 351/Quds-1 missile was used to strike the Saudi Aramco Khurais oil-field facility; the attack was claimed by Yemeni Houthi rebels but likely planned and executed by Iran.

Beginning with the Chinese supply of Silkworm systems in the mid-1980s, Iran has also deployed an array of short-, medium-, and long-range anti-ship missiles. Iran has provided the 35km-range Nasr and 120km-range Noor to Hizbullah, and more recently to the Houthis.

Like its ballistic missiles, support for regional actors has become a prime pillar of Iran’s military posture. Iran’s proliferation activity has focused on the Syrian regime and non-state actors in Gaza, Iraq, Lebanon, Syria and Yemen. Even though its support for some of these actors goes back to the early 1980s, it is only in the last two decades that Tehran has begun to supply them with more strategic-weapons systems, including heavy-artillery rockets and ballistic missiles, as well as their production technology. This proliferation benefits Iran in several ways: as force multipliers, as an extension of Iran’s deterrence capabilities, as a way to field test systems and tactics, and as a way to execute attacks with a degree of deniability. Iran uses four complementary strategies to provide its non-state actor allies with UAVs, artillery rockets and ballistic missiles: direct transfers, upgrades to existing missiles and rockets, the transfer of production capabilities, and provision via third parties.

Iran’s missile proliferation efforts have profoundly destabilising consequences for the region, by providing powerful force multipliers for unaccountable non-state actors. This development raises questions in terms of command and control, as well as attribution. What exact degree of operational control Iran asserts over its various partners can be difficult to discern. The fact that Iran, usually known for carefully calibrating its actions, is willing to supply these systems and have them used in combat by allies seems to demonstrate a greater willingness to take risks, as well as a more offensive outlook for Iran’s missile programme in general.

Iran’s ballistic missile systems, supplemented by cruise missiles and UAVs, are intended not only for deterrence, but for battle, including by Iran’s regional partners. In a new report, the IISS provides a detailed assessment of Iran’s missiles, and the manner and purposes for which it has been...