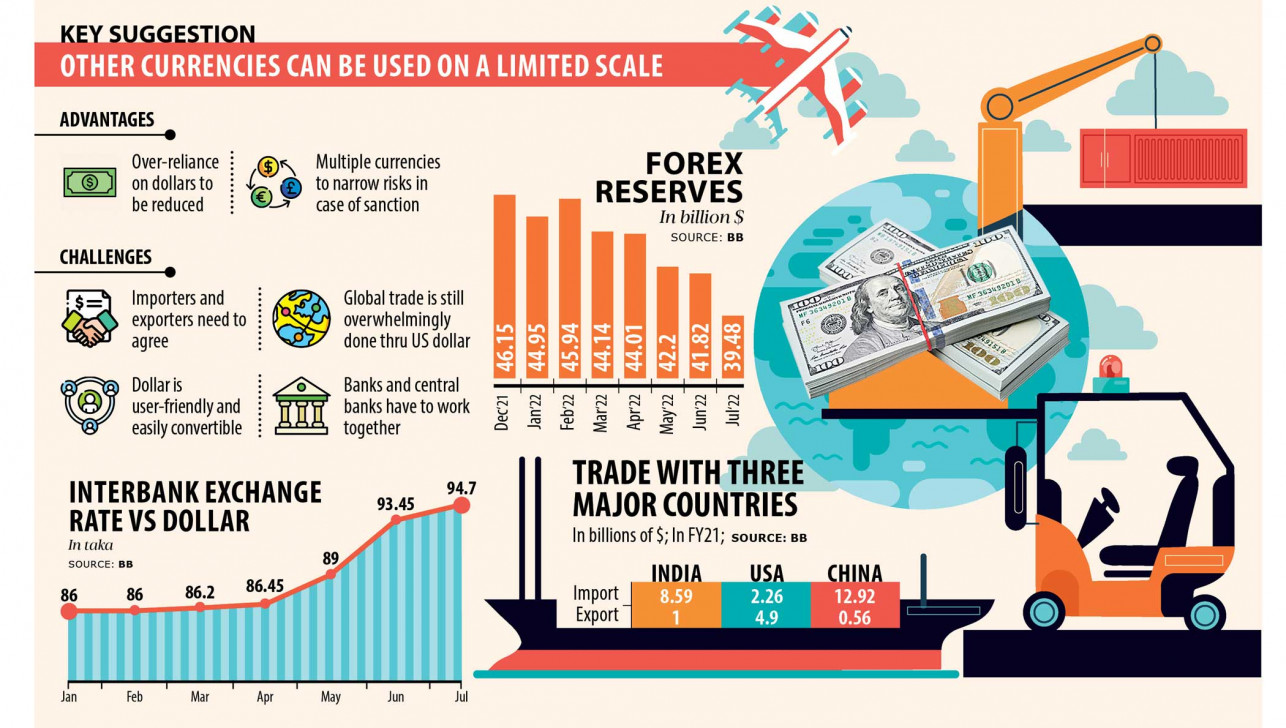 The US dollar is currently one of the most talked about issues.

This is because the American greenback, which had been stable against the Bangladeshi taka for several years, has become dearer from the initial months of 2022.

The demand for US dollars has surged to clear mounting import bills, which are much higher than the country's combined earnings through exports and remittances.

This has sent the currency to cross the psychological threshold of Tk 100 for importers last month, up from Tk 90 earlier this year.

The rally has continued even though the Bangladesh Bank took a number of measures, including the pumping of $7.6 billion in the fiscal year of 2021-22 to cool off the foreign exchange market and more than $1 billion since July, and tightened imports of non-essential goods.

Yesterday, importers had to settle payments by buying a dollar at as high as Tk 111.

As the volatility in the forex market persists, leading chambers such as the Metropolitan Chamber of Commerce and Industry have urged the central bank to allow multiple currencies, including the Chinese renminbi, for international trade settlements to cut Bangladesh's over-reliance on the US dollar.

The suggestion has evoked debates.

Bankers and economists have described the idea as good in principle but added that the use of other currencies for global trade can be only on a limited scale, but not at this difficult time when the global currency market is volatile.

As per Bangladesh Bank rules, banks are allowed to maintain foreign currency clearing accounts with the central bank in the US dollar, the pound sterling, the euro, the Japanese yen, the Canadian dollar, and the Chinese renminbi.

This means businesses can already carry out international trade transactions by using the currencies along with the US dollar. But a majority of local exporters show reluctance in settling their global trade using currencies other than the US dollar.

Of Bangladesh's total trade of more than $130 billion, as much as 99 per cent takes place through the American greenback.

In Bangladesh, local exporters have to import raw materials to manufacture exported-oriented items. The import payments are settled by the US dollar gained from their export earnings.

"If they use two separate currencies to settle international trade transactions, businesses may face losses in some cases due to the exchange rate risk," said a central banker.

He reasons that it would be difficult for businesses to carry out trade in the Chinese currency as the trade gap with the world's second-biggest economy is wide, with the balance tilting towards Beijing.

Besides, the central banker says, Chinese exporters usually don't show a willingness to receive payments in their own currency.

"This is because many of them have businesses in a number of countries where the US dollar is essential to run their operations smoothly."

In principle, the idea of using multiple foreign currencies for international transactions and reducing the dependence on a single currency is fine, said Atiur Rahman, a former governor of the Bangladesh Bank.

There are difficulties, especially in implementing the payment system, he said.

"The regulatory challenges will be huge as well. It will be difficult to trade between countries with substantial trade imbalances," he said, adding that a lot of arrangements regarding payments and settlements are needed involving banks and central banks.

Rahman thinks Bangladesh should not jump on this just because there is pressure on the reserve.

"At best, we can do experimentation using one or two banks to see how the system works. Our situation is not so dire that we will have to pull out of the existing system that is time-tested."

"And it will take time to replace the US dollar as the greenback is still very user-friendly."

Syed Mahbubur Rahman, managing director of Mutual Trust Bank, thinks since Bangladesh is an import-depended nation, there are few options for the country to reduce its reliance on the US dollar.

Even, a currency swap might not be a cost-effective method arrangement for the country, he said.

"If we follow swap with the countries like China and India, Bangladesh will hardly benefit. We will have to face a hefty amount of interest in repaying the loans under the swap."

In the past, efforts were made to popularise the euro and the renminbi to counter the dominance of the USD.

Multiple currencies reduce the risk of sanctions. But there have to be inflows and outflows to enjoy the benefit of carrying out trade in multiple currencies, said Mamun Rashid, a treasury and economic analyst.

Currencies have to be convertible against each other. This means the taka could be traded directly against the Indian rupee or the renminbi. When that happens, exporters from Bangladesh could receive the currencies and settle imports against them as well.

Selim Raihan, a professor of economics at Dhaka University, backs the idea of a currency swap, saying a number of countries are already doing this.

"But any currency swap is not a good idea at this volatile time in the global market."

According to Prof Raihan, Bangladesh can consider doing trade with countries and regions with their own currencies.

For example, the country can export goods to India in the rupee and clear the equal amount of import bills using the currency as well.

A similar process can be followed in the case of China, the biggest import source of Bangladesh.

Bangladesh exported $1 billion worth of goods to India and imported $8.5 billion from the neighbouring country in the fiscal year of 2020-21, according to BB data.

The nation exported $566 million worth of goods to China and imported $12.9 billion worth of items from the world's second-largest economy in the same year.

"We can also do the same for trade with the European Union. We must explore the opportunity," said Prof Raihan, adding that such arrangements could allow Bangladesh to reduce the demand for the US dollar by nearly $2 billion.

Ahsan H Mansur, executive director of the Policy Research Institute of Bangladesh, argues that the use of the Chinese currency in trade instead of the US dollar will not yield much in saving the greenback.

"This is because the final convertibility will be done in the US dollar. So, the idea of using the RMB instead of the dollar is not feasible at this moment."

Similarly, a full currency swap is also not possible with both China and India, he said.

Zahid Hussain, a former lead economist at the World Bank's Dhaka office, said the choice of the US dollar for price invoicing and payment settlements is an international convention.

"It could have been any other currency as long as it is generally accepted by all parties."

"What is important is everyone uses the same currency as a unit of account. Using multiple currencies would be a regression towards an unnecessarily higher transaction cost like the barter system."

Hussain says the Chinese renminbi is ascending as a currency for settling international payments, but it is not used as a unit of account by third parties nor considered a safe haven.

Mustafizur Rahman, a distinguished fellow at the Centre for Policy Dialogue, said the BB does not have significant reserves of the Indian or Chinese currencies to carry out trades.

"The availability of the currencies is a major challenge."

Bangladesh runs higher trade deficit with both India and China so it is not easy to trade in their currencies, he said.

"At maximum, we can trade in the currency only up to the amount that we export to these countries."

Md Serajul Islam, a spokesperson of the BB, says the central bank is observing the global situation and will decide depending on the situation. 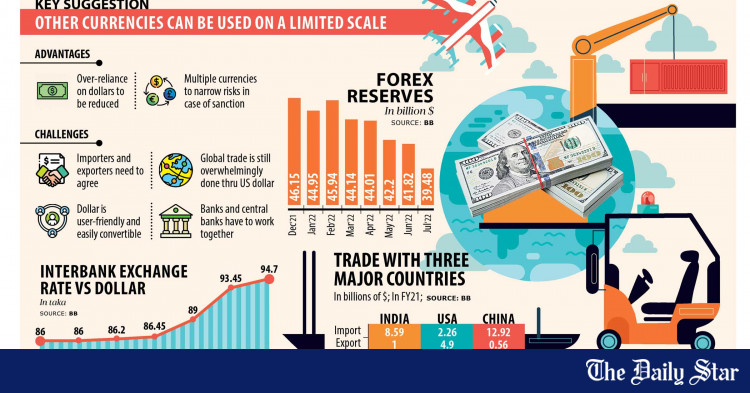 Should Bangladesh go for alternative currencies?

The US dollar is currently one of the most talked about issues.

I don't see much merit in carrying out transactions in a currency as heavily manipulated as the Renmimbi, at any given point its several orders of magnitude more unreliable than the USD on its worst day. It's okay for countries that have no other choice (like Russia) but not for most anyone else.