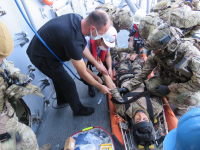 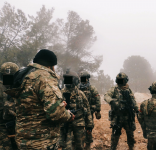 To add to the above video the AirTEP extraction equipment is seen being used by the Special Forces Command OKK. 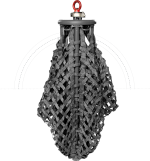 • Airborne: designed for any helicopter
• Versatile: all situations in severe environment
• Quick: Extraction of a group in less than 5 min
• Efficient: 10 soldiers at once

Thanks to a 25 meter rope, the extraction or insertion missions can be carried out in confined areas.

The descent and opening are entirely controlled by the load master. The dropping phase is not longer than 10 seconds.

Secured by a safety belt hooked to the mast, soldiers are hand free and have a 360° vision. The capacity is 10 pax in full military gear.

The boarding phase is not longer than 1 minute.

Folded inside the helicopter, the AirTEP has no effect on the approach flight.

Flying at the maximum speed of 100 kts, the design of the platform and the rope give a great in-flight stability: no pitching nor gyratory effect.

The AirTEP system is used in military extraction or rescue operations, typically when helicopters cannot land.​

Extracting people one by one is highly risky especially when times and conditions are at the worst. AirTEP protocol is quicker and safer. 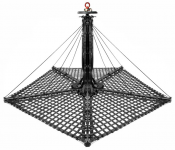 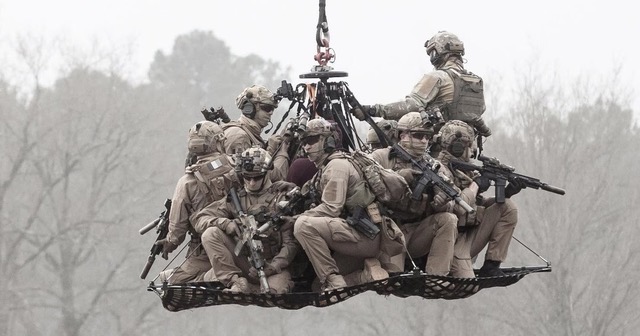 In the Gendarmerie Commando Special Public Security Command, the Special Operations Course was successfully completed with the participation of 18 guest personnel from the People's Republic of Bangladesh within the scope of cooperation with Friendly and Allied countries.