China Backs Off From Fight With K-Pop Fans

South Korea’s soft power should be a model for Beijing.​ 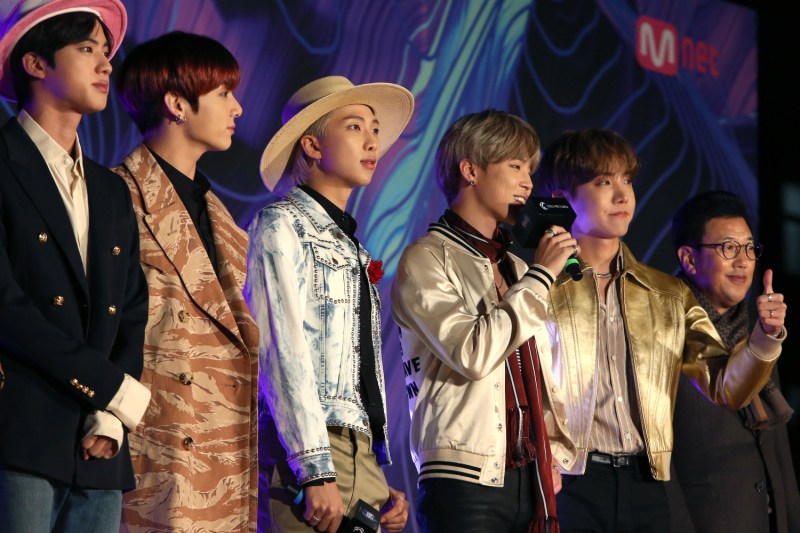 Members of BTS attend the 2019 Mnet Asian Music Awards at Nagoya Dome in Nagoya, Japan, on Dec. 4, 2019. JEAN CHUNG/GETTY IMAGES
The PRC proved no match for ARMY. When the K-pop superstar group BTS acknowledged the shared sacrifice of Americans and Koreans as they received the Korea Society’s James A. Van Fleet Award, named after a U.S. general during the Korean War, Chinese social media roiled with outrage, perceiving BTS’s message to be a slight against Chinese soldiers in the war. The Global Times, China’s state-owned tabloid, blasted the group for its “one-sided attitude” that “negate[d] history.” Online stores began pulling BTS-related product, anticipating the kind of nationalist frenzy that has cost giant franchises like the NBA and the South Korean supermarket store Lotte hundreds of millions of dollars in the past.
But China’s media offensive against the kings of K-pop barely lasted two days. Global Times quietly deleted some of its articles criticizing BTS, and the negativity against the group in Chinese social media also faded quickly. Some Chinese fans’ call for a boycott barely made a dent on BTS, supported by their worldwide fan club “ARMY” (which stands for Adorable Representative M.C. for Youth, if you were wondering). Shortly after they received the Van Fleet Award, BTS became one of only five music groups in history to seize the top two spots simultaneously on Billboard’s Hot 100 songs chart, joining the Beatles and Bee Gees among others. Last week’s initial public offering of Big Hit Entertainment, BTS’s production company, was among the most successful IPOs in the history of the Korean stock market as its share price nearly doubled on the first day.
Trending Articles

This recent episode is yet another example of an increasingly obvious fact: China is bad at soft power. Its recent turn toward heightened and obnoxious nationalism is not winning hearts and minds. Across the globe, negative perception of China is reaching historic highs. In a recent survey of 14 countries by the Pew Research Center, the average negative opinion of China was 74 percent—up from 36.5 percent in 2002. That’s in stark contrast to its next-door neighbor South Korea, which does not take a back seat to many countries when it comes to, ahem, expressive nationalism. In a 2019 survey conducted by the Korean Culture and Information Service (KOCIS), the average favorability of South Korea among the 15 countries surveyed was a solid 76.7 percent, with over 90 percent favorability ratings from several countries, including Russia, India, Brazil, and Thailand. South Korea, in other words, is as popular as China is unpopular. South Korea’s pop culture has played a major role in the world’s positive image of the nation: A plurality of the respondents in the same KOCIS survey said K-pop was the first thing that came to mind about South Korea (12.5 percent), followed by Korean food (8.5 percent) and culture (6.5 percent).
China would be wise to take a page from South Korea’s soft power strategy. To be sure, the fashionable claim that the “Korean government created K-pop” is an overstatement and is usually deployed to discount the artistry and creativity of Korea’s pop culture by painting it as a dreary public works project. Fundamentally, South Korean pop culture found global resonance because Korea’s artists created cultural products that the world found compelling. But the Korean government did play a role: It wanted to gain soft power through pop culture, devised an overarching strategy to boost its own artists’ reach, and implemented specific policies conducive to the flowering of pop culture.
Former South Korean President and Nobel Peace Prize winner Kim Dae-jung was the architect of the country’s soft power strategy. Kim won office at the right time in 1997, as South Korea was beginning to see an explosion of pop culture following the transition from military dictatorship in 1987. Seo Taiji and Boys, the fountainhead of modern K-pop, debuted in 1992. Seopyeonje, a 1993 movie about Korea’s traditional pansori music, drew nearly 3 million viewers, becoming the most successful domestic movie to date. The 1991 megahit What Is Love, with an unreal national household rating of 64.9 percent (the third-highest ratings for a Korean drama ever), was also the first Korean drama to find popularity in China when CCTV (now CGTN) aired the show in 1997. Standing at the cusp of this Big Bang, Kim Dae-jung formulated a stance toward pop culture development that continues to this day.
Kim had a great deal of confidence in Korean culture’s ability to stand out on the world stage.

Kim had a great deal of confidence in Korean culture’s ability to stand out on the world stage.
Click to expand...

He liked to note that although Korea was influenced by Chinese culture for 2,000 years, Korea was never Sinicized unlike, as he saw it, the Mongols of the Yuan Empire or the Manchus of the Qing Empire—because Koreans were able to accept international culture and create their own unique version. Kim also believed that culture grew through exchanges; any attempt to shield a culture from international exposure would lead to stagnation. Most importantly, Kim recognized that the government had a role supporting culture, but it must not overstep its boundaries. In a 2007 interviewthat revisited his administration’s achievements, Kim made this belief clear: “Intervention kills the arts. Creativity must flow freely. But artists are economically weak, so the government should support them financially. Help them with money, but do not intervene.”

This “support but do not intervene” came to be known as the “arm’s-length principle”—the guiding doctrine for South Korea’s cultural policy to this day. Under this principle, the Kim administration focused on promoting freedom in creation and exchange, establishing the legal infrastructure to protect artists’ right to intellectual property, and providing financial subsidies without reference to the contents of the art. The administration abolished the approval process for movies that effectively acted as censorship. The ban on Japan’s pop culture products was lifted, allowing movies, TV shows, comic books, and music to travel freely across the strait. Initially, some feared that the superior Japanese product would decimate the Korean market—but the result was the opposite, as Korean dramas and K-pop began to flourish in the Japanese market instead.
Numerous laws were passed to protect intellectual property rights and the flow of money arising from such rights, especially with respect to movies and music. The laws also provided clarity on the legal status of emerging forms of pop culture at the time, such as video games, live music clubs for indie bands, and online streaming. Kim promised to dedicate at least 1 percent of the government budget for the promotion of arts, bringing it up from the 0.3 percent range at the time. His administration achieved this milestone in 1999; some of the budget was used to establish the Culture Industry Promotion Fund that provided low-interest loans for content creators. One beneficiary of this fund, for example, is the game developer Bluehole, best known for its multiplayer online game PlayerUnknown’s Battlegrounds (PUBG), one of the world’s most popular e-sports platforms. All of these policies formed the foundation for what came to be known as hallyu, or the “Korean wave,” a global surge of popularity for Korean pop culture products, including movies, TV shows, and music.
Successive South Korean administrations did not always adhere to the Kim administration’s arm’s-length rule, as they gave into the temptation of trying to control culture through pulling on the purse strings. Conservative President Lee Myung-bak, in an attempt to “balance the cultural power,” compiled a blacklist of left-leaning celebrities to cut off from public support. In the following Park Geun-hye administration, the blacklist grew to include nearly 10,000 names. Fortunately, however, such attempts to subjugate the arts were never normalized. When the blacklist was revealed in 2016, it became one of the flash points for the candlelight protests that brought down Park’s presidency through impeachment. With the arm’s-length principle restored, South Korea’s pop culture has had another banner year in 2020: In addition to BTS’s success, the movie Parasite by Bong Joon-ho—who was one of the first directors to be blacklisted by the Lee and Park administrations—won four Academy Awards, including best picture.
China certainly does not lack the ability to make fantastic pop culture products; indeed, it was not too long ago that Hong Kong was the cinematic capital of Asia, with masterpieces from directors like Wong Kar-wai and John Woo. What it lacks, instead, is a leadership committed to supporting the arts without intervention and the civil society that would discipline the leadership if it strayed from that principle, as was the case with Kim Dae-jung and South Korea’s body politic. Instead, the controls over pop culture have become tighter and tighter in the last eight years under Xi Jinping. Chinese leaders who desire greater soft power would do well to heed Kim’s simple diagnosis: “China does not have anything like hallyu because it is not a democracy.” 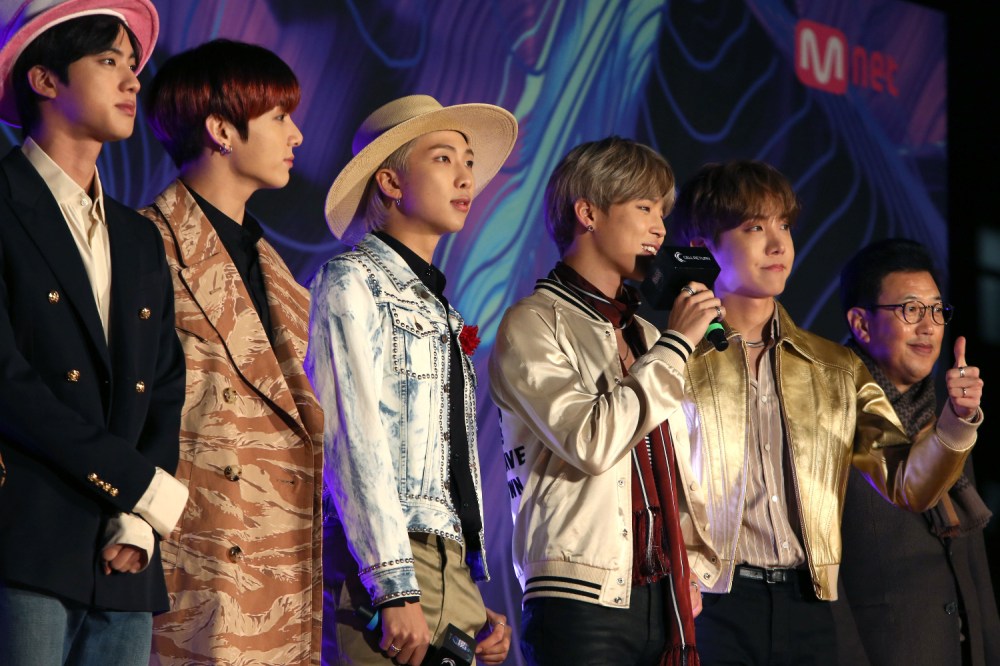 China Backs Off From Fight With K-Pop Fans

South Korea’s soft power should be a model for Beijing.

This recent episode is yet another example of an increasingly obvious fact: China is bad at soft power.
Click to expand...

The old adage of the wind and sun setting a bet as to who was more powerful comes to mind.

Each bet they could get a traveller (down on Earth) to remove his coat the quickest.

The Wind went first, and blew and blew harder and harder....but it only made the traveller grab his coat tighter and tighter. The Wind finally gave up.

The Sun went next, and simply beamed his warm rays on the traveller...till the traveller finally removed his coat as he felt too hot.

China often tries to be the wind these days. But brute force and bullying never works like gentle persuasion and free will.

Nilgiri said:
The old adage of the wind and sun setting a bet as to who was more powerful comes to mind.

Each bet they could get a traveller (down on Earth) to remove his coat the quickest.

The Wind went first, and blew and blew harder and harder....but it only made the traveller grab his coat tighter and tighter. The Wind finally gave up.

The Sun went next, and simply beamed his warm rays on the traveller...till the traveller finally removed his coat as he felt too hot.

China often tries to be the wind these days. But brute force and bullying never works like gentle persuasion and free will.
Click to expand...

side effect when you grow up being the princelings in a one child family. Bad habits tend to follow. even when you're now a leader of a world great power.

Yankeestani said:
oh god no China should be the opposite of taking cues from ROK regarding soft power be like Best Korea

That's the thing....they (PRC) could just easily ignore ROK culture and be their own thing that they always claim to be and assert.

First step would be not caring what or how ROK honours events crucial to its formation and existence today.

The creepy ex-gf routine of stalking and calling you at 4.00 AM to mouth-breathe heavily till you hang up has to stop.