Oublious said:
What kind comparison are we talking about?
Click to expand... 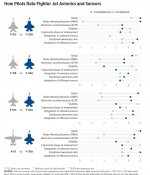 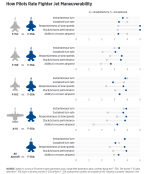 F-35 annihilates everyone in terms of RWR and ECM. In radar it annihilates the F-16C and on pair with heavy F-15E.

When in comes to maneuverability F-35 is very good at low speeds and close maneuver but somewhat losing in sustained turn rate.

The major problem of the F-35 is ease of use especially compared to two seater F-15E.

An F-35 assigned to the 356th Fighter Squadron takes off to participate in an agile combat ... [+]
U.S. AIR FORCE PHOTO BY SENIOR AIRMAN DUNCAN C. BEVAN


But over 20 years of R&D, that lightweight replacement fighter got heavier and more expensive as the Air Force and lead contractor Lockheed Martin LMT +1.2% packed it with more and more new technology.
Yes, we’re talking about the F-35. The 25-ton stealth warplane has become the very problem it was supposed to solve. And now America needs a new fighter to solve that F-35 problem, officials said.
MORE FOR YOU

With a sticker price of around $100 million per plane, including the engine, the F-35 is expensive. While stealthy and brimming with high-tech sensors, it’s also maintenance-intensive, buggy and unreliable. “The F-35 is not a low-cost, lightweight fighter,” said Dan Ward, a former Air Force program manager and the author of popular business books including The Simplicity Cycle.
The F-35 is a Ferrari, Brown told reporters last Wednesday. “You don’t drive your Ferrari to work every day, you only drive it on Sundays. This is our ‘high end’ [fighter], we want to make sure we don’t use it all for the low-end fight.”
“I want to moderate how much we’re using those aircraft,” Brown said.
Hence the need for a new low-end fighter to pick up the slack in day-to-day operations. Today, the Air Force’s roughly 1,000 F-16s meet that need. But the flying branch hasn’t bought a new F-16 from Lockheed since 2001. The F-16s are old.
In his last interview before leaving his post in January, Will Roper, the Air Force’s top acquisition official, floated the idea of new F-16 orders. But Brown shot down the idea, saying he doesn’t want more of the classic planes.
The 17-ton, non-stealthy F-16 is too difficult to upgrade with the latest software, Brown explained. Instead of ordering fresh F-16s, he said, the Air Force should initiate a “clean-sheet design” for a new low-end fighter.
Brown’s comments are a tacit admission that the F-35 has failed. As conceived in the 1990s, the program was supposed to produce thousands of fighters to displace almost all of the existing tactical warplanes in the inventories of the Air Force, Navy and Marine Corps.
The Air Force alone wanted nearly 1,800 F-35s to replace aging F-16s and A-10s and constitute the low end of a low-high fighter mix, with 180 twin-engine F-22s making up the high end.


But the Air Force and Lockheed baked failure into the F-35’s very concept. “They tried to make the F-35 do too much,” said Dan Grazier, an analyst with the Project on Government Oversight in Washington, D.C.
There’s a small-wing version for land-based operations, a big-wing version for the Navy’s catapult-equipped aircraft carriers and, for the small-deck assault ships the Marines ride in, a vertical-landing model with a downward-blasting lift engine.
The complexity added cost. Rising costs imposed delays. Delays gave developers more time to add yet more complexity to the design. Those additions added more cost. Those costs resulted in more delays. So on and so forth.
Fifteen years after the F-35’s first flight, the Air Force has just 250 of the jets. Now the service is signaling possible cuts to the program. It’s not for no reason that Brown has begun characterizing the F-35 as a boutique, high-end fighter in the class of the F-22. The Air Force ended F-22 production after completing just 195 copies.
“The F-35 is approaching a crossroads,” Grazier said.

Pentagon leaders have hinted that, as part of the U.S. military’s shift in focus toward peer threats—that is, Russia and China—the Navy and Air Force might get bigger shares of the U.S. military’s roughly $700-billion annual budget. All at the Army’s expense.
“If we’re going to pull the trigger on a new fighter, now’s probably the time,” Grazier said. The Air Force could end F-35 production after just a few hundred examples and redirect tens of billions of dollars to a new fighter program.
But it’s an open question whether the Air Force will ever succeed in developing a light, cheap fighter. The new low-end jet could suffer the same fate as the last low-end jet—the F-35—and steadily gain weight, complexity and cost until it becomes, well, a high-end jet.
If that happens, as it’s happened before, then some future Air Force chief of staff might tell reporters—in, say, the year 2041—that the new F-36 is a Ferrari and you don’t drive your Ferrari to work every day.
To finally replace its 60-year-old F-16s, this future general might say, the Air Force should develop an affordable, lightweight fighter. 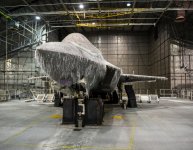 Unique footage shows a reportedly rare landing maneuver performed by a British Royal Navy F-35 pilot onto the HMS Queen Elizabeth. The pilot conducts a Shipborne Rolling Vertical Landing (SRVL), which is used to land a Vertical/Short Take Off Landing aircraft using both the vertical thrust from the jet engine and lift from the wings. This allows for a rolling landing with a significantly reduced approach speed and landing distance.

But what is the point, you may be asking... The SRVL maneuver allows the aircraft to land without first dumping access fuel and ammunition into the sea to lighten its load. Therefore, it can be packed to the brim with payload and no-one will worry about wasting ammo and polluting the ocean. Additionally, the technique has no need for a tail hook and arresting cable to bring the aircraft to a stop.

The three Belgian companies of the BeLightning consortium have started producing parts of the F-35 aircraft, Belga news agency reports.

Through the Essential Security Interest (ESI) program, Lockheed Martin will provide industrial opportunities for multiple Belgian companies in all three geographic regions (Flanders, Brussels and Wallonia). The projects secured through the ESI program will bring cutting-edge manufacturing techniques and benefits, expanding the Belgian industry’s skills and knowledge and providing high-tech jobs for Belgians for decades to come. Some of the companies that have secured projects through the ESI program include ASCO, Feronyl, ILIAS Solutions, SABCA, Sonaca, and AMI Metals. The Belgian Air Component will operate F-35As from Kleine-Brogel Air Base in the Flanders region and Florennes Air Base in the Walloon region.

Three Belgian aeronautical companies boarded the Lockheed Martin F-35 program in March 2021 thanks to a significant public investment: the federal government has in fact decided to grant a total aid of 135 million euros to Sonaca, Sabca and Asco so that they can manufacture rear fins (horizontal stabilizers) for the F-35 Lightning II ordered, among others, by the Belgian Defense. The three companies of the BeLightning consortium have just started producing these parts of the F-35 aircraft.

The three Belgian companies of the BeLightning consortium have started producing parts of the F-35 aircraft, Belga news agency reports.

Difficulty sustaining the engine on the Lockheed Martin F-35 Lightning II Joint Strike Fighter (JSF) is contributing to a higher cost per flying hour than originally anticipated, a former programme official and a government auditor have noted.

A former F-35 programme official, who was grated anonymity to speak freely, told Janes on 9 June that the original concept predicted that the aircraft would have a cost per flying hour between USD25,000–30,000 in 2021 dollars, once the programme reached the current stage: between initial operational capability (IOC) and full operational capability (FOC). This cost per flying hour was supposed to be somewhat comparable to newer Lockheed Martin F-16 Fighting Falcons. 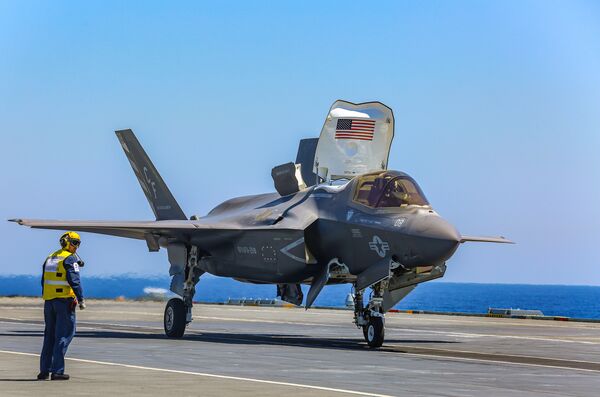 With 336 points, it showed the highest overall benefit and was the clear winner with a lead of 95 points or more over the other candidates.

In terms of effectiveness, the F-35A achieved the best result because it has a marked technological advantage over the other candidates: it includes entirely new, extremely powerful and comprehensively networked systems for protecting and monitoring airspace. The F-35A is able to ensure information superiority; this means pilots benefit from a higher situational awareness in all task areas when compared with the other candidates. This is especially true for day-to-day air policing.

What is more, the F-35A is the only aircraft that has been designed from the ground up to be especially difficult for other weapons systems to detect. The resulting high survivability is a great advantage for the Swiss Air Force.

In addition, because the F-35A is comparatively easy to operate and is able to provide information superiority, it requires less training and has a better ratio of flight to simulator hours. Because of this, the F-35A requires about 20% fewer flight hours than other candidates, and about 50% fewer take-offs and landings than the Air Force’s current jet aircraft, which the F-35A will be replacing.

Finally, it can be assumed that as the newest of the weapons systems evaluated, the F-35A will be able to sustain its technological lead well into the future. Given the planned service life of 30 years, this is a major advantage over the other candidates.