Defence Q&A Is the Iranian army really strong enough to invade Azerbaijan? Will Turkey allow this?

Status
Not open for further replies.

Instead of discussing this issue on the topic of the Karabakh war, you can discuss it here.

Is it as simple as some Iranians think to invade Azerbaijan, totally supported by Turkish war induatry and army, which has the most comprehensive combination of conventional and state of art weapons against an Iran that uses ballistic missiles and drones as its main army element ? We have an Iran that has made it a duty to meddle in Azerbaijan's internal affairs after Karabakh war and this Iran has completely lost its influence in the Caucasus region with the initiative of Turkey, but what is the result Iran is trying to reach with such threatening approaches?

Why is Iran raising such a loud voice from the corridor to be opened between Nakhchivan and Azerbaijan ? Could the activities of Turkey and Azerbaijan in the region have made Iran feel inadequate and worthless ? That's why, maybe they are making such provocations to be a role-grabbing and to be remembered at the table? You can discuss these issues in this section.
Last edited: Oct 10, 2021
Sort by date Sort by votes

Nuclear said:
Azerbaijan Will Stand No Chance in front of Iran
Iran Got A Ton Of ballistic missiles r they dumb to even compare them selfs
to Iran
they make their own Suicide Drones !!!
A TON of Cruise Missiles

Quantity. No quantity. Btw, AZ has some ADS.
Upvote 0 Downvote

Huelague said:
Quantity. No quantity. Btw, AZ has some ADS.
Click to expand...

I know they have ADS
But in a large ballistic missile fire rate, they will stand no chance we are talking about a country making every day maybe 5-10 MRBM
At Least they make their own drones so no waiting for delivery


What they are trying to achieve by flexing muscles? - I really dont know, because it's quite clear they wont dare to start a war.

Iranians love to use proxies: Houthis against Saudis, Palestinians and Hezbollah against Israel. But no such proxies around Azerbaijan. Armenians surely dont wish to serve as Iranian proxy and face another war.
Upvote 0 Downvote

Nuclear said:
I know they have ADS
But in a large ballistic missile fire rate, they will stand no chance we are talking about a country making every day maybe 5-10 MRBM
At Least they make their own drones so no waiting for delivery

Americans killed top generals of persians and they shot passenger plane in Iran and in return they achieced american soldiers with headeache lol. To able hit 2 targets they have used more then 20 expensive BM.

This kind arguments are for kids.
Upvote 0 Downvote
A

Iran is not a weak country by any stretch but it should know its limits. Their advantage comes solely from numbers and size, there is very little quality in terms of equipment and weaponry. Much of their armed forces still have the same limited capabilities as they did 40 years ago. Very little evolution has happened in terms of conventional warfare. Asymmetric tactics and strategies means very little within a country that you have practically no proxy presence in. Not to mention their doctrines and unit structures are entirely based around defensive warfare to repel a potential American invasion.

Their Air Force is basically non-existent, being merely relocated to close-air support roles with what little means they have at their disposal. I am almost convinced all of it will come from drones instead of fighters jets or bombers. Its a miracle in its own right that they managed what little they have to be flight capable, though no doubt the average flight hours of pilot is very limited aswell as a result.

Seriously all Azerbaijan needs to do is hold until Turkey can come in to back it up, which it is more then capable of doing. By no means is Azerbaijan weak, its very strong in fact for its size, economy and population. Preparing for war for the last 30 years can create a very capable and professional armed forces. Though on thing that is definitely is disadvantage for Azerbaijani is its geography. The Araz river provides decent protection but after that then it just flat grasslands that are hard to defend.
Upvote 0 Downvote

So Iran has started playing their proxy game in Azerbaijan now.

Fortunately, one of the few things our government is really good at is flushing out foreign agitators. Iran has tried this strategy before, apparently they haven't learned a thing. Or maybe they are just a one-trick pony.
Upvote 0 Downvote

Oublious said:
Americans killed top generals of persians and they shot passenger plane in Iran and in return they achieced american soldiers with headeache lol. To able hit 2 targets they have used more then 20 expensive BM.

This kind arguments are for kids.
Click to expand...

People that compare pure military numbers have no real understanding of strategic realities, for example even though Iran has a bigger military than
Azerbaijan its military is spread out across many different fronts, it has to defend against threats in the Middle East, Persian Gulf, Afghanistan and etc.

When you compare the strength of Iranian military near Azerbaijani border, Azerbaijani is the one with actual numerical superiority, Azerbaijan has 120,000+ troops stationed near the south, including in Nakhchivan, even if Iran decides to move a good size of its army towards the border with Azerbaijan, which is something they might no be willing to do due to having so many threats in so many regions, it will take a long time for them to coordinate such force.

People just look at the number on wikipedia, and think that entire force can fight a war anywhere at any minute, military movements take a long time and Iran has more regional threats than any other country.

And again, is Iran willing to move its missiles from underground shelters ? Which will leave them exposed to potential strikes from Arabs, USA and Israel.

The reality is, Iran has too many enemies in the region to launch a war against anyone. and I didn't even include 15 to 20 million Azerbaijanis in Iran.
Upvote 0 Downvote

Nuclear said:
It's not that expensive for them + it's for propaganda and giving a message to Saudi Arabia + Israel + America
Their BM Got High Accuracy
They got a ton of cruise missiles its not big of a deal
if azerabijan win nagorno karabakh
doesn't mean they can defeat iran

Azerbaijan can have whatever they wish for from Turkey in case of war.
May I remind everyone how the world got to know that TB-2s and suicide drones plus a sortiment of modern ammunition were "sold" to Azerbaijan in such a rapid manner?
The line is clear. Turkey won't shy of using its state-of-art high-tech weapons, military expertise, and consulting to back Azerbaijan.
Upvote 0 Downvote
A

Azerbaijan could not go toe to toe in BM procurement with Iran, they should invest in modern air power.

And no, drones alone aren't that decisive consider Iran has drones too. And just as advanced.
Upvote 0 Downvote

Yes, Iran's missile variety is huge, but Iranians must understand that it will not be enough. Iran has been disturbed by the activities of Azerbaijan for a while. This discomfort has always existed for a long time, but now it has reached a dangerous stage for them. Excellent relations with Israel and Turkey's military and political support are pushing Iran towards loneliness and aggression in the region. My personal comment is that Iran will increase this pressure, maybe it will help Armenia more. They just sound like empty cans. What they can do is very limited.
Upvote 0 Downvote

AlphaMike said:
Azerbaijan could not go toe to toe in BM procurement with Iran, they should invest in modern air power.

And no, drones alone aren't that decisive consider Iran has drones too. And just as advanced.
Click to expand...

Iran has drones just as advanced like the turkish tb2?
Upvote 0 Downvote

Iran is upset because Azerbaijan freeing around 90% of Karabakh means that Iran's black market economy, particularly smuggling, is going to take a huge hit (we've caught dozens of Iranian drug smugglers on the border since the war). They are even opposed to any Azerbaijan/Armenia or Turkey/Armenia rapprochement talks for this exact reason.

They are also concerned about the increasing sense of nationalism among Azerbaijanis and Turkmen and other Turkic minorities in Iran. They brought it on themselves mostly, by treating them like garbage, as well as doubling down on this behavior by deliberately trying to settle Iranic minorities like the Kurds in Azerbaijani-populated areas and turning a blind eye when violence flares up.

For that reason, while I sympathize to a degree with peaceful Iranians who have to live under that awful regime, I cannot really say I'll shed a tear the day when Iran inevitably falls apart.
Upvote 0 Downvote

As far as I know, they introduce a new one every month
Upvote 0 Downvote
A 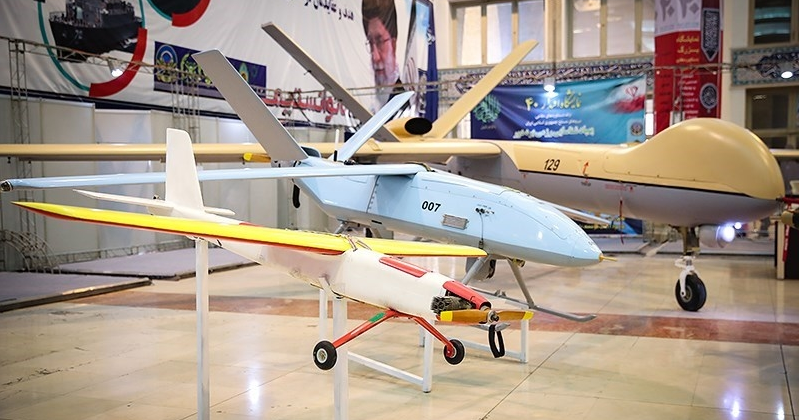 The Oryx Handbook Of Iranian Drones

Lots of people have drones these days, but no one was able to utilise them in the "shock and awe" style Turkey was, except for Azerbaijan. Many people even speculate it was really Turkish drone operators of that conflict. If so no one has been able to use drones in the way Turkey has.

In Libya Haftar for example had more drones, technically better drones in pure stats and was using them for longer. But he couldn't do 5% of what Turkey was able to do using drones.

In syria the civil has been going on 10 years, only Turkey was able to display such drone destruction, not assad, not iran, not russia, not isreal.
Upvote 0 Downvote

As for Iran, the game is finally over. All regional states see it as a proxy state of the west used to divide and kill Muslims. It screams zionism, but only fights and kills Muslims.

Instead of iranian backers getting angry at Iranian support for armenians who hate muslims, who will shit on the religion to attack the Turks, they are angry at Muslim Azerbaijan liberating her lands from non-muslim occupiers.

Iran is a cursed state. Her backers are a cursed people.
Upvote 0 Downvote

Status
Not open for further replies.

Defence Q&A How is Artillery laser munition is guided by a uav?