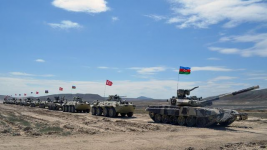 Turkey and Azerbaijan are once again conducting joint military exercises. The exercise named "Mustafa Kemal Atatürk 2021" started in Baku. The exercise, in which unmanned aerial vehicles will also be used, will continue until 30 June.​

The Ministry of Defense of Azerbaijan announced that the joint military exercise called "Mustafa Kemal Atatürk 2021", which is planned within the framework of military cooperation between the two countries, has started in Baku.

soldiers, 40 tanks and armored vehicles, 20 cannons, 7 attack and transport helicopters, 3 unmanned aerial vehicles and 50 military vehicles are participating in the exercise, which will continue until 30 June .

With the exercise, it is aimed to develop the joint operational capability of the two armies, to improve the command and control and management skills, and to enable commando personnel to carry out operations within the chain of command.