Two RAF E-3Ds have deployed to the Mediterranean to support CSG21. (Janes/Paul Tompkins)
The unannounced participation of the E-3Ds in the Mediterranean phase of the CSG21 deployment emerged after the aircraft's ADS-B transponder was tracked on an open source website during its missions from RAF Akrotiri in Cyprus.

An E-3D was first tracked on 30 May operating east of Gibraltar after HMS Queen Elizabeth and CSG21 entered the Mediterranean. From 7 June onwards, the two E-3Ds have been flying over the eastern Mediterranean. On 20 June RAF and US Marine Corps F-35B Joint Strike Fighters launched from Queen Elizabeth and flew their first missions over Syria and Iraq. According to the tracking data, an E-3D was airborne to support this mission.

A senior UK defence source told Janes on 25 June that the E-3Ds were the operational command of the carrier strike group and it was likely they would be redeployed to the Mideast and Far East to support later stages of the CSG21 cruise to Japan and South Korea.

On 25 June an RAF spokesman confirmed the deployment of the aircraft to Janes , “RAF intelligence surveillance and reconnaissance assets, including the E-3D, are supporting the CSG21 deployment and associated operational flights. Operational command of supporting assets will depend on location and mission.”

RAMSTEIN, Germany - Four Turkish Air Force F-16s from 6th Main Jet Base at Bandırma touched down at Malbork Air Base in Poland on Tuesday.

This third Air Policing detachment in the region – in addition to the Spanish Air Force at Šiauliai, Lithunia, and the Italian Air Force at Ämari, Estonia – is an uptake of additional aircraft offers made by the Allies. The deployment of another additional fighter detachment to Malbork, POL, takes place under the auspices of the existing NATO enhanced Air Policing posture introduced in 2014. The deployment underlines the solidarity and cohesion among NATO Allies and the collective commitment to deterrence and defence.

Turkish Air Force personnel and equipment was airlifted into Malbork Air Base, Poland, with a C-130 aircraft. The F-16 fighter detachment will work with the Polish Air Force and the deployed Allied air forces in the region. Photo by 22nd Air Base Malbork.

Sixty years after introducing the enduring NATO Air Policing mission, deployments like that of the Turkish F-16s to Malbork show our readiness and responsiveness and NATO's continuing air agility, capability and adaptation.

For some ten weeks, Malbork Air Base, Poland, will be the home base for four Turkish Air Force F-16 fighters and facilitate Allied cooperation and interoperability reassuring NATO Allies on the eastern border of NATO. Photo by 22nd Air Base Malbork.

Three Allies from the south – Spain, Italy and Turkey – are supporting NATO's Baltic Air Policing in the north demonstrating Alliance cohesion and solidarity. Deployed in the Baltic region, they will work with each other and the hosting air forces to enhance cooperation and interoperability. 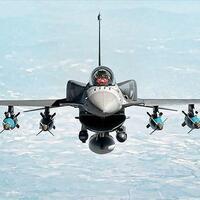 Turkish and US fighter jets have taken up NATO air policing duties this week to guard the skies over Poland and Iceland, a NATO spokesperson said on July 7.

hm... showing solidarity with NATO allies is important, but it's also important not to be tricked into provocation.

Fighter jets from the United States and Turkey are taking up NATO Air Policing duties this week, guarding the skies over Iceland and over the Baltic region.

“We thank our Allies the United States and Turkey for contributing to NATO’s Air Policing missions”, said NATO spokesperson Oana Lungescu. “Air Policing helps keep our skies safe and secure round the clock. This is a clear example of Alliance solidarity in action, demonstrating that NATO has the capabilities and the resolve to protect all Allies," she said.

On Wednesday (7 July 2021) four US F-15 landed at Keflavik airbase to conduct Air Policing over Iceland. Once certified by NATO’s Combined Air Operations Centre at Uedem, Germany, the US jets are on standby to scramble at moment’s notice to keep Iceland’s airspace safe. On Tuesday (6 July 2021), four Turkish F-16 arrived at Malbork air base in Poland to work with the Polish air force in securing the skies in the region. The Turkish jets and their 80 support personnel will remain until mid-September.
Across Europe, NATO fighter jets are on duty around the clock, ready to scramble in case of suspicious or unannounced flights near the airspace of NATO Allies. This includes Air Policing missions in which fighter detachments rotate in and out of allied countries to help safeguard their skies. NATO scrambled its air forces across Europe more than 400 times in 2020 to intercept unknown aircraft - mostly from Russia - approaching NATO airspace.

According to a press release published by NATO on July 27, 2021, Standing NATO Mine Countermeasures Group One (SNMCMG1) conducted Operation Bottom Search German waters near Eckernförde from 19-23 July 2021. The Operation was officially known as Marinekommando Unterabteilung Geoinformation Dezernat Maritime Geo-Unterstützung (MWDC).

The objective of the operation was to reduce risk posed by sea mines to maritime communities and traffic of the Baltic Sea, and provide enhanced training in mine countermeasures operations to SNMCMG1 participating units.

Following the first and second World Wars several ammunition dumping areas were established in the area. Over time, ordnance drifted from the original sites or became naturally buried in sand and mud. To this day, the presence of historical sea mines and other explosive remnants of war poses a threat to maritime traffic in the Baltic Sea.

Cumulatively SNMCMG1 performed 141 hours of bottom search operations and covered an area of ten square nautical miles. During the operation, the group located and identified one 1940s artillery shell and two sea mines, confirming that a significant amount of military munitions remain present in this area of the Baltic Sea from the two World Wars. While mapping the ocean bottom SNMCMG1 also located and mapped two shipwrecks that were unable to be identified due to their deteriorated conditions.

To locate the maximum amount of objects, SNMCMG1 units use hull-mounted or side scan sonar equipment to detect objects on the sea bed. The objects are then further identified by divers or remotely operated underwater vehicles.

SNMCMG1 provided all collected data of the area to the German Mine Warfare Data Center (MWDC) to facilitate their efforts to map the sea bed in order to ensure the safety of navigation within German territorial waters. All historical ordnance search activities were executed in close coordination and consent of the German authorities.

During the operation, SNMCMG1 consisted of the flagship FGS Elbe (Germany) and mine countermeasures vessels FGS Homburg (Germany) and LVNS Talivaldis (Latvia).

The Tripartite class is a class of minehunters developed from an agreement between the navies of Belgium, France and the Netherlands. A total of 35 ships were constructed for the three navies. The class was constructed in the 1980s–1990s in all three countries, using a mix of minehunting, electrical and propulsion systems from the three-member nations.

In 2007, the Latvian Naval Forces acquired five ships (including LVNS Talivaldis) from the Netherlands which had been taken out of service at the beginning of the decade.