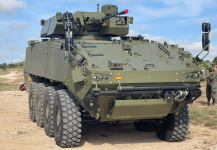 According to InfoDefensa echoing the delivery schedule published by the Spanish Defense Ministry, the Spanish Army expects to receive the first seven units of the 8x8 VCR Dragon Wheeled Combat Vehicle in 2022. The delivery pace will accelerate in the following years, especially in 2025 and 2026, when the reception of 90 and 94 units respectively is expected, which means more than two-thirds of the total.

The production contract for the first phase of the program includes the supply of 348 8x8 VCRs between 2022 and 2027, of which 240 units will be of the so-called full configuration and the remaining 108 vehicles of the simple configuration, InfoDefensa recalls. This contract was signed in August 2020 between the Ministry of Defense and the company Tess Defense, formed by Santa Bárbara Sistemas, Indra, Sapa and Escribano. The execution period runs until October 15, 2030.

The Defense Ministry also explained that the start of production of the 8x8 VCR at the Santa Bárbara Sistemas factory in Trubia (Asturias) is scheduled for December 2021 and pointed out that the hulls of the first units will be manufactured by Mowag, a Swiss subsidiary of GDELS located in the town of Kreuzlingen, where a group of engineers from Santa Bárbara Sistemas already works.

The 8x8 VCR will carry the Guardian 30 remote weapons station from the Spanish company Escribano Mechanical & Engineering, a solution in which the Spanish multinational Indra also participates. The program establishes that 219 vehicles (all units of the Infantry Combat Vehicle version) will be equipped in principle with this tower. Both the 30mm turret and the communications system fell outside the budget of 2.1 billion euros approved for the supply of the first series of 348 Dragon vehicles.

According to InfoDefensa echoing the delivery schedule published by the Spanish Defense Ministry, the Spanish Army expects to receive the first seven units of the 8x8 VCR Dragon Wheeled Combat Vehicle in 2022.