The fleet numbers are from Flight International WAF 2021. 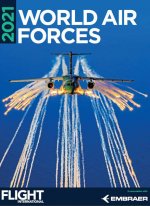 @500 bro i really wonder Israel Air Force. Israel has a small area. You have a very strong and large air force. I wonder how Israel can fit so many planes into this narrow area? I guess air bases are a part of social life.
Z

A Good comparison but in my opinion some points should be deducted due to logistic complexity when equipment from several sources have mixed in. ie. Saudi Arabia, India, Egypt.

Some countries lack certain aircraft type and the number is too low, while others have ordered aircraft counted in. I'll take this list with a grain of salt.

anmdt said:
A Good comparison but in my opinion some points should be deducted due to logistic complexity when equipment from several sources have mixed in. ie. Saudi Arabia, India, Egypt.
Click to expand...

Regarding IAF, 65% of our fighter jet fleet is Russian while over 30% is French considering Jaguar is an Anglo-French aircraft. Though we did have logistical issues with Russian suppliers in the past, most of em have been sorted out in recent times.

Also, the 132 Mig-21s are being phased out while actively being replaced by LCA-Tejas which will of course use domestic suppliers
Last edited: Dec 20, 2020

Zafer said:
#4 position is where Turkey needs to get to.
Click to expand...

Unlikely to happen since the countries listed in ranks 4, 5, 6, 7 & 8 have active threat and adversaries which compels em to bolster fleet strength and capabilities of their respective AFs' for the foreseeable future

Also, three out of those five countries have indigenous fighter jet programs which will be mass produced down the lane

500 said:
The fleet numbers are from Flight International WAF 2021.

We have more then 34 block 50+ fighters. The last purchase was of 30 new fighters. Before that we had a upgrade for 117 fighters. So the total should be 34 plus 117. 151 block50+. The only differences what i new is that the older fighters don't have CFT.

The top two world's air forces, by quality and quantity must be:

In the above list, there are 4 countries that can protect the operative power at a deterrent level in an embargo attack targeting the subsystem and logistics organization. These are USA, China, Russia and may be France. We can also add Israel to this list as an exception for some historical and political reasons. The situation will be understood when you look at the origin of the platforms already indexed by @ 500. Other than that, countries with strong air forces are either tightly linked to NATO infrastructure or have a historic strategic alliance at least with one of these leading countries.

What is not seen when looking at the list, but the main point to note is that today's some of emerging economies (or those seeking more independent/unique policy, if talk on European scale), with a historically strong tradition of air force organizations, are attempts to create independent defense and aviation ecosystems using the post-1990 political conjuncture.

Lets say emerging third branch; the technical and industrial success (or failure) of countries implementing these initiatives has the potential to cause dramatic changes in the lists like that above in the next decades.

It is the nature of things that emerging countries seek more independent foreign policy against hegemonic countries after a point. The transition of the world to a multipolar order again has a locomotive effect that strengthens this seek.

This is more evident when the origins and investors of the new generation air platform projects in the 2030-2040 range are examined. Two different projects have started in Europe, on the other hand, important Asian economies such as India, Korea and Indonesia attach great importance to national aviation programs. Also Turkey is onether country which has this objective. While these countries continued to procure services and systems in line with their historical strategic relations, they began to allocate (or plan) huge resources to the domestic aviation industries.

Therefore, although the list above has a methodology that can be regarded as quite successful, what it expresses shows just a platform-based and short-to-medium term projection that is free from any type of political conditions.
Last edited by a moderator: Dec 20, 2020

This is just raw force potential.

How its deployed and integrated is another matter. That is open to near endless discussion/debate past US being clear no. 1....especially given US has no threat in its super-continent at all and has oceans separating from the threats on other continents. This mean USAF and USN can deploy near totally aggressively on other's turfs compared to what they can do in response. Every other country is thus complete different scope of debate given what is the role of the AF and the reaction and operation times involved w.r.t geography and economic space.

The UK for example ranked where it is by this raw force potential is also kind of silly given the high boost they get from other factors like integration (both vertical and horizontal and also with other service branches), NATO, deployed experience etc....i.e the multiplier value for AWACS and C4I is not really the numbers postulated here nor are they 1:1 equivalent between countries either in some general sense.

Some have brought up logistical issues (many country's platforms etc) and its valid point, but different AF's have done this to different degrees too (in institutional and realised operational level)....so for example Egypt and India are not really comparable for it (though seemingly both use multi-country platform).

India for example has such things as a dedicated TACDE school and long experience now in adding mirage and jaguar (in 80s) to a soviet "Core"....that it now takes forward with indigenous platforms too....whereas its far more recent phenomenon in Egypt (and the reasons for Egypt doing so are fairly different too).

Saudi Arabia also is very reliant on other countries and geopolitical realities, it is not very independent + sovereign military...so its high force potential in reality is very constrained.

I mean technically Ukraine SSR was one of the most powerful airforces by itself during cold war (and anyone can look at what they inherited even after soviet breakup), but it wouldnt really be counted separate to USSR for similar reasons...they were part and parcel of an overriding sovereignty/force structure.

I am at a loss here.

Where are the figures next to the different models of fighter aircrafts, bomber aircrafts, special mission and attack aircrafts from?

What are the national scores supposed to indicate? Would anybody be kind enough to explain?

From the original source, I can not find any such information.

Halo guys, why dont include Indonesia ????

Somehow Oman is included, but not Indonesia....erm.

Nilgiri said:
Another big glaring error in this list.

Somehow Oman is included, but not Indonesia....erm.
Click to expand...

Yup, if COIN aircraft is included as well so there will be another 15 from Supertucano squadron

And Indonesian T50i Golden Eagle have been equipped with radar and sidewinder. It wasnt in the past. 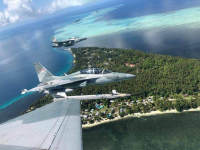 ekemenirtu said:
I am at a loss here.

Where are the figures next to the different models of fighter aircrafts, bomber aircrafts, special mission and attack aircrafts from?

What are the national scores supposed to indicate? Would anybody be kind enough to explain?

From the original source, I can not find any such information.
Click to expand...

There is a rank from global fire power, which counts only by quantity:

Which is silly. There are many other ranks which use subjective opinions. I decided to make a rank based both on quality and quantity. Of course it is far from perfect but surelly better than global fire power approach.


anmdt said:
A Good comparison but in my opinion some points should be deducted due to logistic complexity when equipment from several sources have mixed in. ie. Saudi Arabia, India, Egypt.
Click to expand...

This would be very subjective. I wanted to use only the paramilitaries we can estimate well.