Anastasius said:
I don't necessarily disagree with the core of the sentiment but the problem is that certain, ahem, "hardliners" consider literally anything "westernization" even something as simple as believing that education and critical thinking should not be marred by religious dogma or that women should be permitted a degree of freedom and safety from physical abuse.
Click to expand...

Thats the punchline of the joke, I am afraid.
Oh they will tell you about scientists who died 1000 years ago.

The biggest brainfuck I have ever experienced was that in a youtube video, when a historian said European enlightenment didnt happen because of Christianity but despite Christianity, this bigot in the comment section said yeah Christianity isnt compatible with science, good thing our lovely religion Islam is!

Ardabas34 said:
Thats the punchline of the joke, I am afraid.
Oh they will tell you about scientists who died 1000 years ago.

The biggest brainfuck I have ever experienced was that in a youtube video, when a historian said European enlightenment didnt happen because of Christianity but despite Christianity, this bigot in the comment section said yeah Christianity isnt compatible with science, good thing our lovely religion Islam is!
Click to expand...

Islam and Christianity are not Anti science. But Modern Science and the Abrahamic religions contradict each other.

Muslims and Christians saw science as a way to prove God existed. I dont believe the dark ages myth a lot of historians no longer believe in the "dark ages".

His talking about kemalism.

Nein2.0(Nomad) said:
Islam and Christianity are not Anti science. But Modern Science and the Abrahamic religions contradict each other.

Muslims and Christians saw science as a way to prove God existed. I dont believe the dark ages myth a lot of historians no longer believe in the "dark ages".

People dont realise this but the Seljuks destroyed the Mutazlite doctrine as they saw themselves as the champions of Sunni Islam. Mutaziltes were seen as the creed of reason and logic but they did oppress and get people killed for not believing in their doctrine.

Islam is stronger than Kemalism. Has always been. Kemalism has never destroyed Islam. Is Kemalism even followed properly nowadays barely actually. You are talking about a ideology that was born in the 1920s vs a religion that was already 1000 years old. Turkey also placed a lot of restrictions on the religion still came back. It cant be denied that Islam has been in Anatolia for centuries that it cant wiped out overnight. Chp even today moved on from kemalism and has become more social democrat.

Islam has a strong foundation. But its in decline.

Islam or any other religion wont able to survive capitalism, science and technology. Its a global trend.

As christianity has empty churches, Islam is also ending up the same.

Globalisation might be the most critised thing on the planet but it cant be stopped. Globalisation has been happening for centuries. Then you have demographics altering countries as they become more cosmopolitan.

Why does modern Science contradict Islam and Christianity.

One believe Science should be used to prove the existence of God and exalt his name while Modern Science is all about challenging everything including proving that there is no God.

Religions, cultures and civilisations conducted science there own way.

For some it might be reason and for the others its about God. Or the other just sees science as a way to better something like mankind, his community or the world.

People seem to throw that Islam and Christianity hate or contradict science. Not true they had their own forms of conducting science.

Just because we run on modern science does not mean the old is trash.
Last edited: Sep 13, 2021

Erdogan wanted a pious generation but instead that backfired.

Because of a global trend. People are leaving religion.

You cant combat progress like capitalism, modern science and technology.

Karl Marx supported the North during the American civil war and outlined his reasons for it.

By believing the North will win. This will allow the South to progress.

Karl Marx believed that progress created the conditions for a communist revolution.

Im not making this shit up people.

Former communist countries might going for a religious revival but I pointed above that revival will fall off soon.

Islamists lost the culture war and also the political war of the modern world.

They know it. Everytime they came into power they promised to do away with the old secular dictatorships only to become a Islamist dictatorship example is Iran and Afghanistan.

Also corruption becomes rife along with economic issues. Tbey get brought down then comes the Secular overlords who continue where they left off. Because corruption is a great thing. 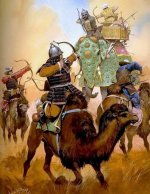 The Timurid army faces the elephants of the Delhi Sultanate. 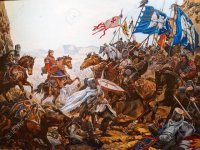 The Seljuks destroy a Byzantine/Crusader coalition. This victory confirmed that the Turks wont be going anywhere in Anatolia and are now the new players of the region. 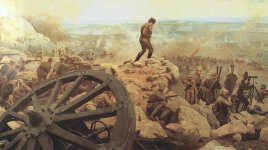 Turning point of the Greco-Turkish war of the Turkish independance war.

Turkish victory led to the Greeks to lose the intiative which led to their withdrawal and subsequent counter attack from the Turkish army led by Ataturk would lead to Greece losing all of its gains in Western Anatolia.

During its retreat Greek forces deployed sorch earth tactics by burning down vilages and poisoning wells to stop the rapid advance of the Turkish army.

Armenian and Greek militias were also employed to do this. Thats why culprits of burning Izmir are the Armenians or the Greeks.

Izmir was a prize that the Turks wanted. Makes no sense for them to burn down a prized possesion.

Ghaznavid Empire was the first of the Turks and the Muslims to use elephants in their armies.

There is also debates whether the White Huns used them first before the Ghaznavids.

White Huns were basically a mix of Proto Turks, Proto Mongols and Iranian nomads. I do believe they are Turkic or maybe a mix.